Dalvin Cook showed up for his postgame interview in Green Bay wearing dark shades, an appropriately stylish look after the Minnesota star put his stamp on a 28-22 statement victory.

With 30 carries for 163 yards, two catches for 63 yards and a career-high four touchdowns for the most by a Vikings player in 41 years, Cook simply took over the game. He produced another example of why the team invested so heavily in a second contract for a runner in a league that's titled toward the passers.

Late in the second quarter, Cook gained 3 yards on fourth-and-1 from the 23. He got the ball on the next four plays to finish the drive, too, plowing into the end zone to tie the game at 14. The Vikings (2-5) went on to record one of their best wins in coach Mike Zimmer's seven seasons, considering how outmanned their defense was against Aaron Rodgers and the Packers (5-2). 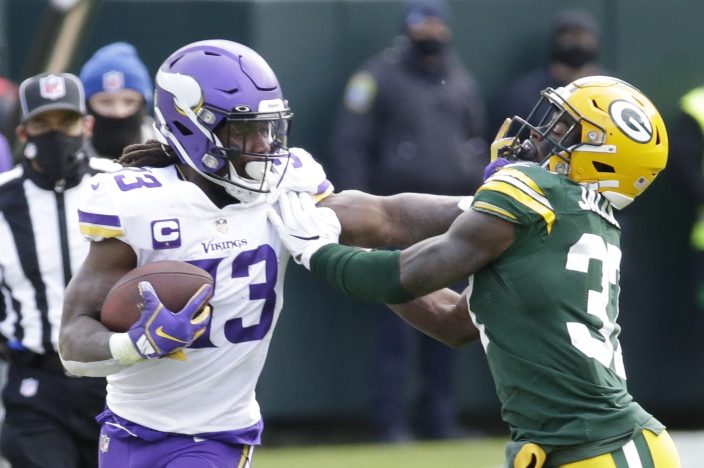 “That’s Coach Zim’s identity,” Cook said, “and that’s the type of football we play in Minnesota.”

The performance would not have been possible without the punishing blocking by Pro Bowl fullback C.J. Ham, who played 22 of 52 snaps, behind an offensive line that performed the best it had all year.

“Anytime Dalvin plays that well, you’ve got to look at what C.J. Ham did, what our tight ends did blocking and what our O-line did, and then you’ve got to look at our coaches and the run plays they put together, which were really well-designed and I think kept Green Bay off-balanced for most of the game,” said quarterback Kirk Cousins, who took a back seat to Cook all afternoon. 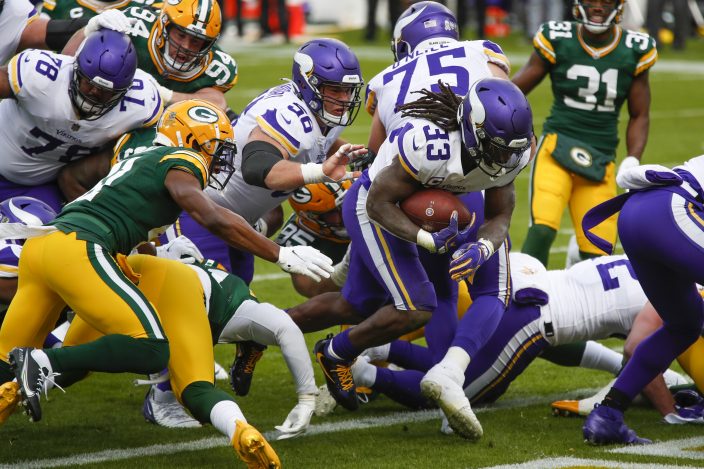 Minnesota Vikings' Dalvin Cook runs for a touchdown during the first half of an NFL football game against the Green Bay Packers Sunday, Nov. 1, 2020, in Green Bay, Wis. (AP PhotoMatt Ludtke)

Three teams that started 1-5 have made the playoffs in the 50 years since the AFL-NFL merger: Indianapolis (2018), Kansas City (2015) and Cincinnati (1970). Now there's an extra wild-card spot, too, for the Vikings to pursue with a schedule that includes four of their next five games at home. Those visitors (Detroit, Dallas, Carolina and Jacksonville) have a combined record of 9-21.

“It’s going to give us some confidence to know what we can do,” linebacker Eric Kendricks said. “We have to keep that energy high the rest of the year regardless of what happens.” 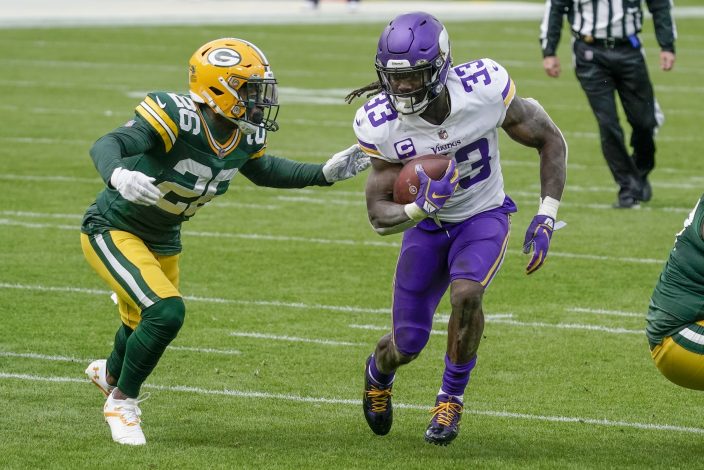 Though D.J. Wonnum's game-ending forced fumble was the only sack, the defensive line produced a steady dose of pressure despite the trade of Yannick Ngakoue. That allowed Zimmer to routinely drop seven players in coverage to help the injury-addled secondary.

“We’re going to continue playing together and having a feel for each other and continuing to get after the quarterback,” Wonnum said.

The combination of inexperience and injuries at cornerback have staked out a near-permanent place in this category for that critical position. First-round draft pick Jeff Gladney is the only cornerback who has played in every game, currently the only healthy regular playing a vital role despite his rawness. Gladney, one of seven rookies who played on defense on Sunday, was outmaneuvered by Davante Adams on his first two touchdowns.

“I’m trying so hard to get these young kids to understand not only about their position, but the guy they’re playing against, where their help is,” Zimmer said. “It just makes it tough.”

Kendricks was an All-Pro last year whose indispensable play has been especially vital with four-time Pro Bowl pick Anthony Barr done for the season. Kendricks, who is second in official league statistics with 78 combined tackles, even covered the star Adams stride for stride and deflected a deep pass in the third quarter at the 15-yard line.

Wide receiver Bisi Johnson, who filled in admirably last season while Adam Thielen was out and started the first two games this year while rookie Justin Jefferson was being broken in slowly, took only two snaps on Sunday.

Chad Beebe moved ahead of Johnson in the pecking order and contributed a 16-yard reception on third-and-8 to keep a touchdown drive moving in the third quarter, as Cousins and the Vikings continue to search for a reliable third option behind Thielen and Jefferson.

Minnesota's league-mandated injury report will again be dominated this week by the cornerbacks. Holton Hill (foot) has missed the past three games, and Mike Hughes (neck) is on injured reserve. Then Cameron Dantzler, Mark Fields II and Kris Boyd were all sidelined on Sunday by potentially serious injuries. That forced Harrison Hand into action on the outside. Free safety Anthony Harris had to play nickel cornerback down the stretch, with Josh Metellus taking over for Harris.

Dantzler, who was taken to a hospital for evaluation after hurting his neck during a collision with Harris while they tried to make a tackle, was “doing well” on Monday, according to Zimmer, and has a chance to play in the next game.

“We all were concerned. It looks like he’s going to be just fine,” Zimmer said.

8.26 — Average yards per pass play by the Vikings, which leads the league.

Even in a nearly empty U.S. Bank Stadium, with general-public ticket sales still prohibited by state virus guidelines for indoor gatherings, the Vikings must regain some of their home-field advantage. They've lost five straight home games, since beating the Lions, coincidentally, last Dec. 8.