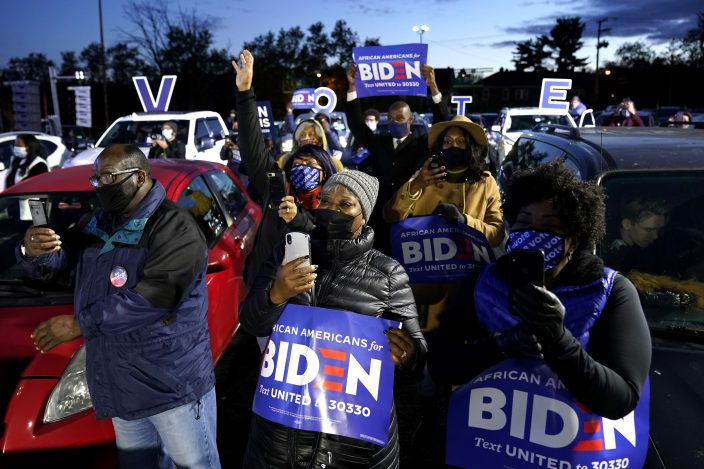 ELECTION 2020 — After a campaign marked by rancor and fear, Americans decide between President Donald Trump and Democrat Joe Biden, selecting a leader to steer a nation battered by a surging pandemic that has killed more than 230,000 people, cost millions their jobs and reshaped daily life. By Jonathan Lemire, Zeke Miller and Alexandra Jaffe. SENT: 1,340 words, photos. UPCOMING: Updates throughout the day. With ELECTION 2020-WHAT TO WATCH — Election Day is finally here — even though 100 million people have already cast ballots. SENT: 1,160 words, photo.

ELECTION 2020-DIXVILLE NOTCH — Two tiny New Hampshire communities that vote for president just after the stroke of midnight on Election Day have cast their ballots, with one of them marking 60 years since the tradition began. The results in Dixville Notch, near the Canadian border, were a sweep for Biden who won the town’s five votes. In Millsfield, 12 miles (20 kilometers) to the south, Trump won 16 votes to Biden’s five. SENT: 320 words. 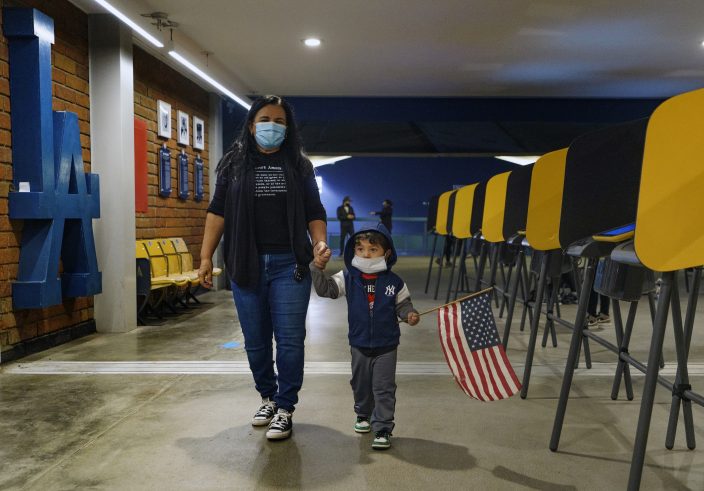 Lisa Carrera, a former Los Angeles Unified School history teacher from La Puente, Calif., holds the hand of her grandson Maverick, 2, after casting her ballot in-person at the Top of the Park at Dodger Stadium in Los Angeles, Monday, Nov. 2, 2020. Turnout has been massive during the early voting period as Californians cast ballots for president, the state Legislature, local offices and on a dozen statewide propositions. By Monday more than 11 million people had already returned their ballots. (AP PhotoDamian Dovarganes)

ELECTION 2020-LEGAL CHALLENGES — Trump says he’s planning an aggressive legal strategy to try prevent Pennsylvania from counting mailed ballots that are received in the three days after the election. Both parties have enlisted legal teams to prepare for the possibility that voting won’t settle the contest. By Mark Sherman. SENT: 970 words, photos.

ELECTION 2020-TRUMP ARMY — Trump’s campaign is poised to deploy an “army” of volunteers and paid staff to watch elections precincts in Democratic-leaning areas with the aim of gathering accounts of ballot fraud that might then be used to challenge the validity of the vote count in key swing states. By Michael Biesecker and Garance Burke. SENT: 1,560 words, photos. Journalists look at a damaged room at Kabul University after a deadly attack in Kabul, Afghanistan, Tuesday, Nov. 3, 2020. The brazen attack by gunmen who stormed the university has left many dead and wounded in the Afghan capital. The assault sparked an hours-long gun battle. (AP PhotoRahmat Gul)

AUSTRIA-POLICE-OPERATION — Austria’s top security official says that four people have died — including one assailant — and fifteen people were wounded in a shooting in the heart of Vienna. Interior Minister Karl Nehammer said that initial investigations indicate that the suspect who was killed had sympathized with the Islamic State group. Authorities are still trying to determine whether further attackers may be on the run. By Philipp Jenne and Frank Jordans. SENT: 350 words, photos. UPCOMING: Developing, will be updated.

AFGHANISTAN — Afghans are mourning the 22 mostly students killed in a horrific attack a day earlier on Kabul University, an attack claimed by the Islamic State. By Tameem Akhgar and Kathy Gannon. SENT: 450 words, photos. 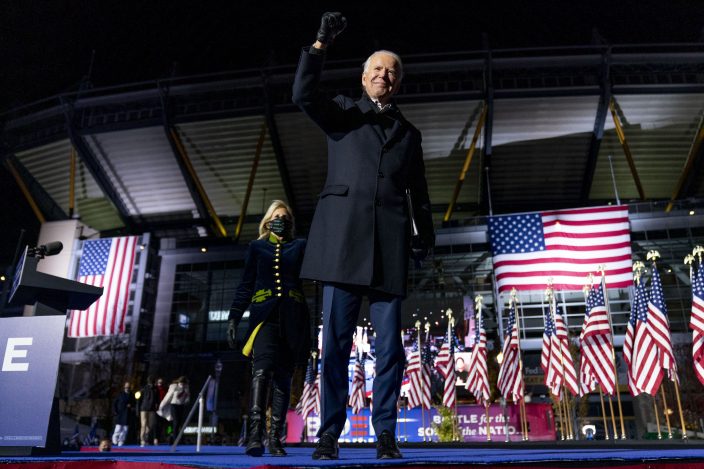 ELECTION 2020-PENNSYLVANIA VOTES-MISINFORMATION — Conservative commentator Wendy Bell is falsely claiming that the administration of Pennsylvania Gov. Tom Wolf is attempting to “silence voters” by ordering people who were potentially exposed to the coronavirus to stay home on Election Day. SENT: 480 words.

VIRUS OUTBREAK-MICHIGAN — Meals at Michigan restaurants came with a new side dish: What’s your name and phone number? SENT: 320 words.

WALMART-ROBOTS —Walmart is laying off the robots it had deployed in about 500 stores to keep tabs on what’s on and not on the shelves. SENT: 160 words.

RESTAURANTS-BANKRUPTCIES — The coronavirus pandemic has dealt the final blow to many restaurant chains, the latest being Friendly’s, which were already struggling with growth in third-party delivery and consumers’ migration away from shopping malls. SENT: 450 words, photo.

FREEWAY SHOOTINGS-METRO PHOENIX — A landscaper once charged in metro Phoenix’s 2015 freeway shootings took the witness stand in a civil trial in which he alleges he was wrongfully arrested. SENT: 750 words, photo.

ELECTION 2020-BIDEN MASK-MISINFORMATION — Trump’s supporters seize on a photo circulating on Twitter that shows Biden not wearing a mask while he talks to a campaign staffer, although the photo was taken in November 2019. By Amanda Seitz. SENT: 420 words.

ELECTION-2020-THE-DAY-IN-PHOTOS — Election Day is Nov. 3, but the nation has been teeming with voting activity for weeks as the 2020 campaign barrels down the home stretch.

VIRUS OUTBREAK-IMMIGRATION ORDER — Democratic lawmakers call on the Trump administration to stop the expulsion of unaccompanied children and other asylum seekers at the U.S. border using emergency powers granted during the coronavirus pandemic. By Garance Burke and Jason Dearen. SENT: 520 words, photo.

VIRUS-OUTBREAK-ASIA — India’s capital is seeing its worst wave of coronavirus infections since the start of the pandemic, even as the nation’s overall cases fall. SENT: 260 words, photo.

VIRUS OUTBREAK-NAVAJO NATION —Lawmakers on the Navajo Nation has approved legislation to reopen the tribe’s four casinos, even as the tribe’s health director warned that the coronavirus is spreading uncontrollably. SENT: 620 words.

VIRUS OUTBREAK-ALASKA — The leaders of the Alaska House and Senate say they do not have the votes to call the Legislature into special session to extend a disaster declaration for the ongoing COVID-19 pandemic and asked Gov. Mike Dunleavy for his help. SENT: 580 words.

VIRUS OUTBREAK-SURGEON GENERAL CITED — A lawyer for U.S. Surgeon General Jerome Adams pleaded not guilty on behalf of the official who was cited by Honolulu police for being in a closed park during a trip to help Hawaii cope with a spike in coronavirus cases. SENT: 340 words.

VIRUS OUTBREAK-NEW YORK — Just under 50,000 New Yorkers tested positive for COVID-19 in October, roughly double the number who got the virus in September. SENT: 230 words.

ELECTION 2020-SENATE — Control of the Senate is at stake. Republicans are fighting to retain their majority against a surge of Democratic challengers across a vast political map — New England, the Deep South, the Midwest, the Mountain West — in states once considered longshots for Democrats. By Congressional Correspondent Lisa Mascaro. UPCOMING: 1,090 words, photos by 6 a.m., updates throughout the day.

ELECTION 2020-SENATE-ALASKA — The major candidates in Alaska’s U.S. Senate race are making their last push for votes ahead of Tuesday’s election, with the campaigns calling Alaskans and knocking on doors and the candidates doing last-minute rallies and stops. SENT: 800 words, photos.

ELECTION 2020-NEW MEXICO — New Mexico election officials are bracing for a final day of in-person voting and absentee-ballot deliveries as Democratic candidates seek to extend their domination in federal elections and Republicans try to reclaim a footing in Congress and reelect the president. SENT: 780 words, photo.

ELECTION 2020-SENATE-ALABAMA — U.S. Sen. Doug Jones of Alabama has made a flurry of campaign stops as the Deep South Democrat tries to avoid being swept away by Republican Tommy Tuberville and a red wave on Election Day. SENT: 610 words, photos.

ELECTION 2020-ARIZONA — Republican Sen. Martha McSally and other GOP candidates barnstormed Arizona as they worked to get out their voters with their traditional election eve rallies. SENT: 960 words, photos.

ELECTION-2020-SENATE-IOWA — Six years after Iowa voters overwhelmingly elected Joni Ernst to the U.S. Senate, the Republican is in a tight contest with Democrat Theresa Greenfield in one of the nation’s most expensive races. SENT: 480 words, photos.

SUPREME COURT-JUVENILE LIFE IN PRISON — The Supreme Court hears arguments in a case that could put the brakes on what has been a gradual move toward more leniency for children who are convicted of murder. SENT: 470 words, photos. UPCOMING: 650 words after 10 a.m. arguments.

TURKEY-EARTHQUAKE — Turkish rescuers in the Turkish coastal city of Izmir have pulled a young girl out alive from the rubble of a collapsed apartment building four days after a strong earthquake hit Turkey and Greece. SENT: 100 words, photos. UPCOMING: Developing, will be updated.

UNITED-NATIONS-THINK-TANK-EPSTEIN — Former Norwegian diplomat and politician Terje Rød Larsen, an architect of the Oslo peace accords, has resigned as president and CEO of the International Peace Institute. He apologized for his “failed judgment” in securing donations from foundations related to financier Jeffrey Epstein, who killed himself while awaiting trial on charges of sex trafficking minors. SENT: 500 words.

MYANMAR-FIREBRAND-MONK — A nationalist Buddhist monk in Myanmar noted for his inflammatory rhetoric has surrendered to police, who have been seeking his arrest for over a year for insulting comments he made about the country’s leader, Aung San Suu Kyi. SENT: 430 words, photos.

PERU-PRESIDENT-IMPEACHMENT — For the second time in less than two months, opposition members in Peru’s congress have persuaded legislators to adopt a motion that will require President Martin Vizcarra to face an impeachment vote. SENT: 300 words, photo.

TROPICAL WEATHER — Hurricane Eta has erupted quickly into a potentially catastrophic major hurricane as it heads for Central America, and forecasters are warning of massive flooding and landslides across a vulnerable region. SENT: 930 words, photos.

UNITED NATIONS-INTERNATIONAL COURT — More than 70 nations are voicing strong opposition to what they consider threats to the International Criminal Court and decrying sanctions on its top officials. SENT: 940 words.

IMMIGRATION-PUBLIC BENEFITS-LAWSUIT — A federal judge in Chicago has struck down a Trump administration rule that would deny green cards to immigrants who use food stamps or other public benefits. SENT: 660 words, photo.

BLACK-CHURCH-FIRES — A Louisiana man who admitted to burning down three predominantly African American churches has been sentenced to 25 years in prison and ordered to pay the churches $2.6 million. SENT: 500 words, photo.

INDUSTRIAL-ACCIDENT-DEADLY-FALL — Two men have died in Delaware after a strong wind tipped over a lift that was holding them about 120 feet in the air. SENT: 90 words.

LSU-HAZING INVESTIGATION — Louisiana State University says a fraternity member has been arrested on charges including hazing in connection with an incident that news outlets reported had hospitalized a student. SENT: 290 words.

AUSTRALIA-ECONOMY — Australia’s central bank has cut its benchmark interest rate by 0.15 of a percentage point to a record low 0.10% in a bid to lift the economy from a pandemic-induced recession. SENT: 670 words, photo.

CHINA-ANT-GROUP-IPO — Chinese regulators have summoned Ant Group founder Jack Ma and two other senior executives to a formal meeting just days before the company’s shares are due to begin trading in Shanghai and Hong Kong. SENT: 390 words, photos.

CAROL-ARTHUR-DELUISE -- Carol Arthur DeLuise, an actor who appeared in several Mel Brooks films and was the widow of Dom DeLuise, has died. SENT: 180 words.