A top leader of Thailand’s pro-democracy protests insisted Tuesday that the student-led movement will not back down from its most controversial demand, that the country’s monarchy undergo reforms.

Lawyer Arnon Nampha also told a crowd outside Bangkok Remand Prison that the movement would hold a large demonstration in front of Parliament if a draft constitutional amendment the protesters are seeking is not approved in its next session, scheduled for mid-November.

“When Parliament opens, and if they do not pass the draft amendment of the constitution, we will close Parliament with our own hands,” he said. 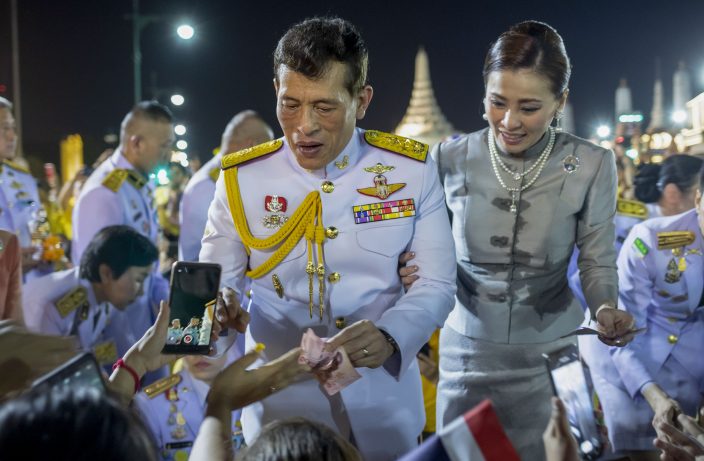 King Maha Vajiralongkorn and Queen Suthida greet supporters in Bangkok, Thailand, Sunday, Nov. 1, 2020. Under increasing pressure from protesters demanding reforms to the monarchy, Thailand's king and queen met Sunday with thousands of adoring supporters in Bangkok, mixing with citizens in the street after attending a religious ceremony inside the Grand Palace. (AP PhotoWason Wanichakorn)

The movement wants Prime Minister Prayuth Chan-ocha to step down, the constitution to be amended to make it more democratic, and the monarchy reformed to make its activities more transparent and accountable. The protesters have been holding almost daily rallies around the country, some attracting upwards of 10,000 people.

Arnon spoke to more than 100 supporters who gathered outside the prison after he and three other protest leaders were freed from custody when a court refused to extend their detention, which had been requested by police.

Police have filed dozens of charges against them in connection with several protests, ranging from illegal use of a loudspeaker in public to sedition. As a result, most have been in and out of jail several times.

Arnon said the protest movement will insist on its three demands, and even if it compromises on the prime minister’s resignation and amending the constitution, it will stick to the third concerning the monarchy.

The protesters believe the monarchy wields too much power, but to royalists it is a untouchable institution that is the heart and soul of the nation. Public criticism of it is unprecedented, and a lese majeste law makes defaming the monarch and his immediate family punishable by up to 15 years' imprisonment.

Counter-demonstrations that have sprung up in reaction to the pro-democracy movement declare they are defending the monarchy. In recent rare appearances, King Maha Vajiralongkorn and other royal family members have reinforced royalist passions with walking tours that take them face-to-face with adoring members of the public.

The government has urged “unity” as a way of easing the political crisis, but there are fears that polarization could foster violence.

“For the next step, it is necessary for us to step forward very carefully because their backs are against the wall,” said Arnon, in reference to Thailand’s conservative ruling establishment. "They prepare to use violence against us.”

The protest movement has generally followed the tenets of nonviolent civil disobedience, a point underlined by Arnon.

“Violence is not the answer,” he told reporters. “Our opponents will also learn that. We will protest based on peace, sincerity and humanity.”

Trouble at home may change Biden's hand in Iran nu ...

A lot of the characters are the sa ...