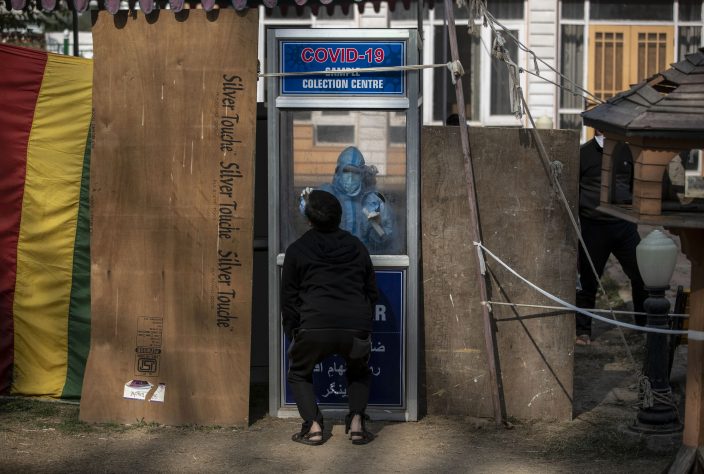 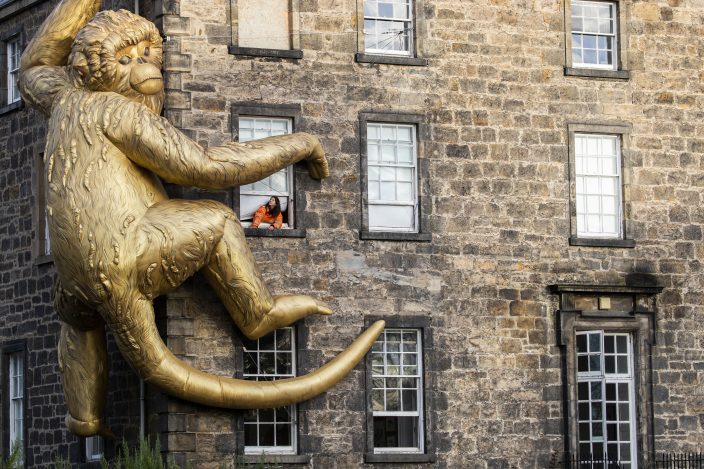 Events manager Alison Taylor takes a closer look at the Golden Monkey installation, by Australian ecological artist Lisa Roet, which makes its UK debut on the exterior of Inverleith House at the Royal Botanic Garden Edinburgh, Scotland, Wednesday, Nov. 4, 2020. The 45-foot high inflatable sculpture aims to highlight primate species whose lives and habitats are under threat from the sprawling concrete jungles of the modern world and depicts an intricately detailed sculpture of the golden snub-nosed monkey an endangered species found in the mountainous forests of central and southwestern China. (Jane BarlowPA via AP)

ELECTION 2020-AMERICA-REACTS — With a bitterly divided America failing to deliver a decisive result for either party, a jittery public is awaiting clarity over the fate of a race that remained too early to call. Votes continued to be counted across the country and will be for days to come as both President Donald Trump and former Vice President Joe Biden remain short of the necessary 270 electoral votes to win. By Matt Sedensky. SENT: 700 words, photos.

ELECTION 2020-VOTECAST — Voters in the U.S. presidential election faced a public health crisis and a wounded economy, but neither candidate emerged as the clear choice to handle both of those issues. That’s according to AP VoteCast, an expansive nationwide survey. By Josh Boak and Hannah Fingerhut. SENT: 1,090 words, photos. With ELECTION 2020-VOTECAST-GLANCE — Supporters of Trump and Biden find little common ground.

Find more coverage below and on the 2020 U.S. Elections featured topic page in AP Newsroom. 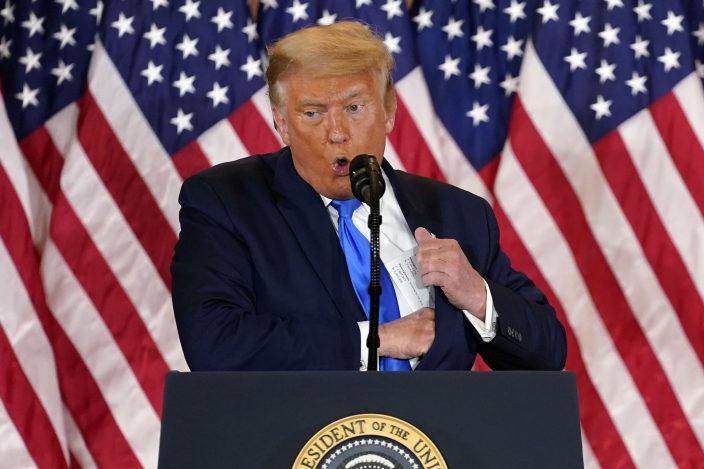 CLIMATE-US — The United States on Wednesday formally left the Paris Agreement, a global pact forged five years ago to avert the threat of catastrophic climate change. The move, long threatened by U.S. President Donald Trump and triggered by his administration a year ago, further isolates Washington in the world but has no immediate impact on international efforts to curb global warming. SENT: 675 words, photos.

VIRUS OUTBREAK — Regardless of the presidential election outcome, a vexing issue remains to be decided: Will the U.S. be able to tame a perilous pandemic that is surging as holidays, winter and other challenges approach? Public health experts fear the answer is no, at least in the short term, with potentially dire consequences. By AP Medical Writer Lindsey Tanner. UPCOMING: 1,000 words, photos by 2:30 p.m. 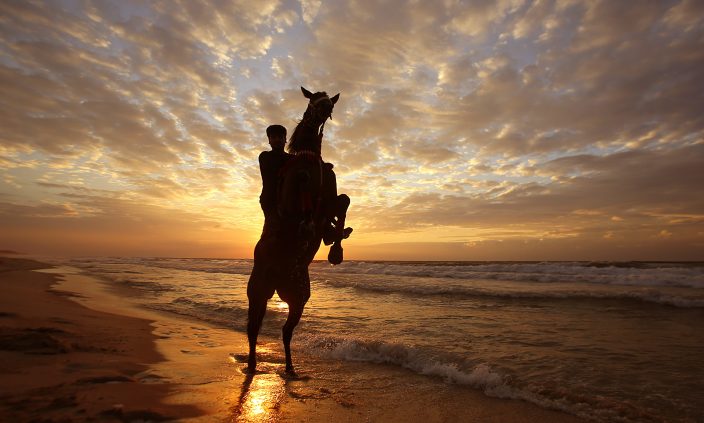 A Palestinian rides a horse on Gaza beach as the sun sets in Gaza City, Wednesday, Nov. 4, 2020. (AP PhotoHatem Moussa)

COLOMBIA-RAPPER — “Toothless Cindy,” whose real name is Marlene Alfonso, is one of dozens of Venezuelan migrants who work on Bogota’s public bus system every day, selling items like pens, or performing for tips. Her age, comical lyrics and unusual attire for a rapper have helped her to stand out. SENT: 700 words, photos. 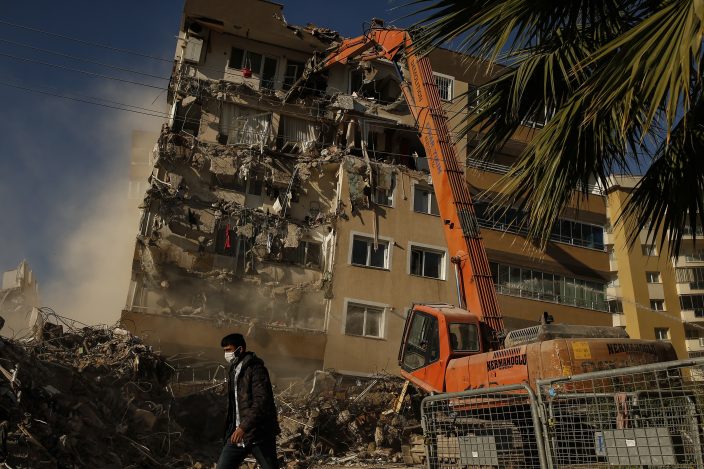 A worker walks past as others demolish a building that was damaged at the Oct. 30 earthquake in Izmir, Turkey, Wednesday, Nov. 4, 2020. Search and rescue operations for survivors had been completed Wednesday at several buildings that fell in the coastal city. More that a hundred people were killed and more that a thousand people were injured. (AP PhotoEmrah Gurel)

SOUTH AFRICA ONE GOOD THING-PANGOLIN CLINIC — Traumatized pangolins that are rescued by poachers are nursed back to health at a Johannesburg wildlife clinic. SENT: 700 words, photos.

ELECTION 2020-TURNOUT — President Donald Trump surprised pollsters, Democrats and even many in his own party by largely succeeding in what he set out to do: Find and mobilize thousands more Trump voters in the places where he dominated four years ago. By Nicholas Riccardi. UPCOMING: 800 words by 5 p.m., photos.

ELECTION 2020-DEMOCRATS — Democrats went into Election Day hoping to seize the White House and majorities in both chambers of Congress in a sweeping victory that would demonstrate an unmistakable repudiation of President Donald Trump and a Republican Party remade in his image. It didn’t work out that way. By Steve Peoples and Bill Barrow. UPCOMING: 770 words by 4 p.m., photos.

ELECTION 2020-CONGRESS — The election left the House and Senate not too different from where they began -- a deeply split Congress -- as voters resisted big changes despite the turmoil at the top of the ticket in the race for the White House. It’s an outcome that almost ensures partisan gridlock in the new year. By Lisa Mascaro. UPCOMING: 850 words by 4 p.m., photos.

EXPLAINING ELECTION 2020-STATES OF PLAY — A handful of pivotal states remain in play in the tightly contested U.S. presidential race. The Associated Press reviews them and examines the reasons they could still go to either Republican Donald Trump or Democrat Joe Biden. SENT: 900 words, photos, developing.

ELECTION 2020-ELECTION SECURITY — Election Day came and went without any overt signs of foreign interference, but that doesn’t mean the risk has faded. A prolonged vote-tallying period in swing states raises the prospect of multiple security concerns, including foreign or domestic disinformation campaigns that could sow doubt in the process as well as digital attacks aimed at election infrastructure itself. By Eric Tucker and Ben Fox. UPCOMING: 800 words by 4 p.m., photos.

ELECTION 2020-LGBT CANDIDATES — A look at some milestone election victories for LGBT candidates. Winners include the first transgender person elected to a state Senate, and the first gay Black man to win a seat in Congress. 700 words, photos. By David Crary. UPCOMING: 790 words by 5 p.m., photos.

ELECTION 2020-ALABAMA-CONSTITUTION-RACE — Alabama voters have approved a measure that would begin the process of deleting racist language from the state’s 119-year-old constitution. Voters in the majority white, conservative state rejected similar proposals twice since 2000. But this measure passed with 67% of the votes on Tuesday. SENT: 400 words, photos.

ELECTION 2020-SOCIAL PLATFORMS — Facebook, Twitter and YouTube were quickly put to the test early Wednesday morning after President Donald Trump told a crowd of cheering supporters at the White House that he would challenge the results of the presidential election. After weeks, or months, of planning, the social media platforms took different approaches to how to address Trump’s unsubstantiated claims of fraud. UPCOMING: 900 words by 3 p.m. Photos.

VIRUS OUTBREAK-EUROPE — Last-minute shoppers in England are out in force and thirsty drinkers planned their final freshly poured pints in a pub for the next month as Britain prepared to join large swathes of Europe in a coronavirus lockdown designed to save its health care system from being overwhelmed. SENT: 890 words, photos.

VIRUS OUTBREAK BELGIUM — Belgium, proportionally still the worst-hit nation in Europe when it comes to coronavirus cases, says there are increasing signs that a turning point in the crisis was drawing close. SENT: 240 words, photos.

SYRIA — Syrian rescuers and activists say at least seven people, including four children, were killed in government shelling of the last rebel enclave in the country’s northwest. SENT: 390 words, photos.

ISRAEL PALESTINIANS — The Israeli military says troops shot a Palestinian gunman who had attempted to attack soldiers near an army checkpoint in the occupied West Bank. SENT: 130 words, photos.

ETHIOPIA-MILITARY-CONFRONTATION — Ethiopia approached civil war on Wednesday as its prime minister ordered the military to confront the country’s well-armed Tigray regional government, accusing it of a deadly attack on a military base and declaring “the last red line has been crossed” after months of alleged provocations. SENT: 990 words, photos.

FINANCIAL MARKETS — Stocks are rallying again on Wednesday, but only after spinning through an election night dominated by surprises and sharp swings. The S&P 500 was up 3.3% in early afternoon trading and on pace for its best day in seven months. Analysts said the gains came as markets saw the upside of political control in Washington remaining split between Democrats and Republicans. SENT: 930 words. Developing.

GORILLA-FAMILY-FEUDS — Gorillas are highly social animals – up to a point. A crowded mountain can make silverbacks more violent. Researchers analyzed 50 years of demographic and behavioral data from Rwanda to show that as the number of family groups living in a habitat increased, so did the number of violent clashes between them. This slowed population growth. SENT: 620 words, photos.