Luxury fashion boutiques, jewelry shops and most of Milan's flagship department were shuttered Friday, as the center of Italy’s vibrant financial capital fell into a gray quiet on the first day of a partial lockdown in four regions aimed at stopping the virus's resurgence.

The new restrictions — which led to closures of a patchwork of nonessential businesses — allow a great deal more freedom than Italy’s near-total 10-week lockdown that started in March, but nonetheless brought recriminations from regional governments that feel unfairly targeted. The south, in particular, which was largely spared the pandemic in the first surge, chafed the most, despite concerns that its weaker health care system was especially vulnerable.

Italy's move echoes those in many parts of Europe, where infections are surging again, but governments have been reluctant to impose the kind of nationwide shutdowns they did in the spring because of the terrible economic damage they did. For instance, many European countries have opted to keep schools open, while shutting bars and restaurants and many shops. 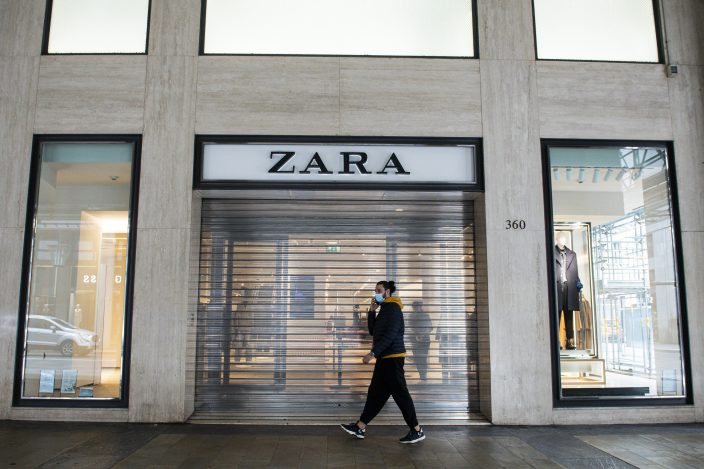 A person walks by a closed Zara shop in Turin, Italy, Friday, Nov. 6, 2020. Piedmont is among the four Italian regions classified as red zones, where a strict lockdown was imposed starting Friday - to be reassessed in two weeks - in an effort to curb the COVID-19 infections growing curve. From today all shops that are considered non-essential will remain closed. (Nicolo' CampoLaPresse via AP)

Even the lighter restrictions this time around, however, are drawing stiff criticism — especially in countries like Britain and Italy where they have exacerbated regional tensions.

Under Italy's complicated 21-point formula, the northern regions of Lombardy, Piedmont and Valle d’Aosta and the southern region of Calabria, the toe of Italy’s boot, faced increased restrictions for the next 15 days, including the closure of all nonessential stores, take-out only for bars and restaurants, distance learning for students 12 and over and a ban on leaving hometowns except for work, health or other serious reasons.

Sicily and Puglia, two other southern regions, fell into a second tier of restrictions, while the rest of the country maintained more freedom of movement but with a 10 p.m. curfew and restaurants closings at 6 p.m. 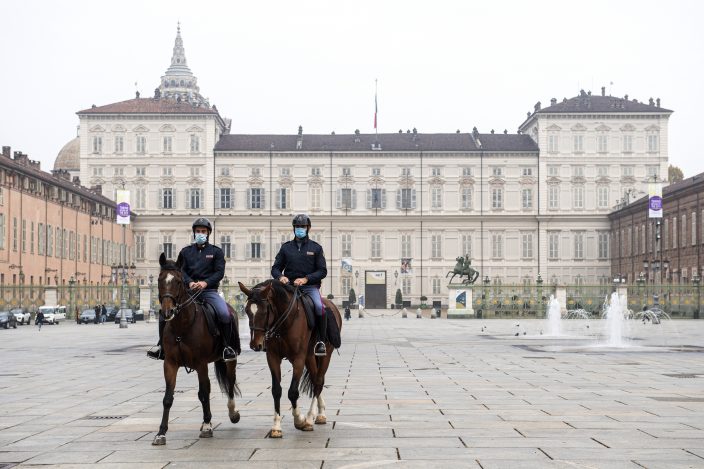 Mounted police walk across Turin's Piazza Castello, northern Italy, Friday, Nov. 6, 2020. Piedmont is among the four Italian regions classified as red zones, where a strict lockdown was imposed starting Friday - to be reassessed in two weeks - in an effort to curb the COVID-19 infections growing curve. From today, bars and restaurants can only work with take-away customers. (Nicolo' CampoLaPresse via AP)

In Rome, Italy’s health minister faced Parliament to defend the government’s handling of the new phase in the crisis amid concerns the government has too often bypassed lawmakers during the health crisis.

“In a great country like Italy, this cannot be the field of a political battle,” Roberto Speranza said, noting that the criteria being applied had been in place since April without dissent. “I say this with all my strength and from my heart: Enough. Don’t fuel polemics.”

Speranza said the lockdowns were a necessity as the number of confirmed infections skyrockets and deaths reach highs not seen since the spring. He pointed to other European countries that are faring even worse as evidence of how the continent failed to stamp out the disease. 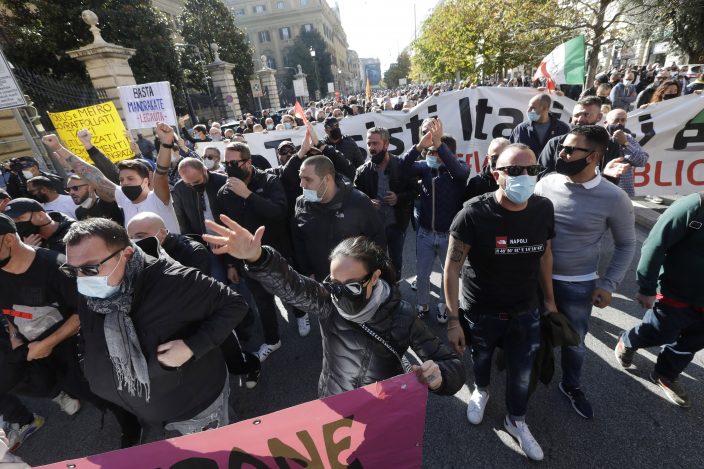 Taxi drivers stage a protest against limitations and the curfew imposed by the government in the effort to curb COVID-19 spread, in Rome Friday, Nov. 6, 2020. (AP PhotoAndrew Medichini)

The restrictions took effect the day after Italy hit a new all-time high of single-day confirmed infections, at 34,505, and the highest number of deaths since May, at 428.

"Maybe people are getting used to seeing 400 dead. That number would have people petrified in front of their TV sets. Now people seem more indifferent,’’ Luca Zerbini, a lawyer drinking a take-out cup of coffee near the Duomo cathedral.

In Calabria, the governor vowed to fight the restrictions. And some mayors in the Lombardy in cities that suffered in the first lockdown but are less hard-hit now have pushed for restrictions to vary by province and not by the larger category of region. 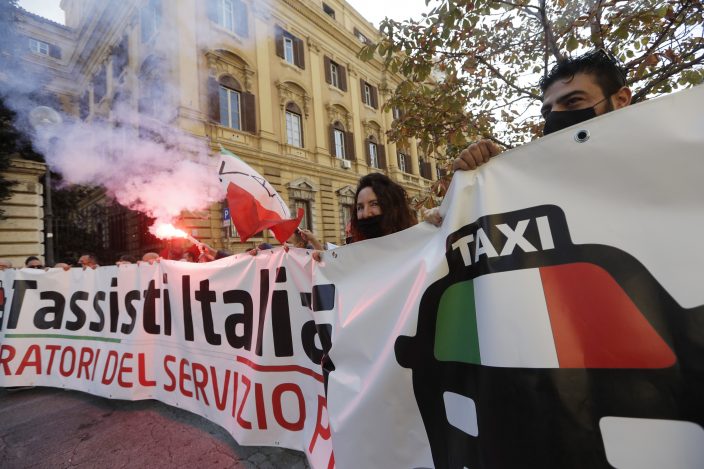 Taxi drivers stage a protest against limitations and the curfew imposed by the government in the effort to curb COVID-19 spread, in Rome Friday, Nov. 6, 2020. (AP PhotoAndrew Medichini)

Milan’s mayor, Giuseppe Sala, rejected such differential treatment within regions, which share a common health care system. “I invite Milanese to stay home as much as possible in these very difficult days,'' Sala said on Friday.

All was quiet in the city, where even the lines that usually form in front of popular takeaway sandwich shops — still allowed to be open — were nowhere to be seen. The hodgepodge of shops considered “necessary” includes hairdressers, cosmetic and perfume stores, florists, and sweet shops alongside grocery stores — but not ice cream parlors or pastry shops. That created the odd situation where the flagship Rinascente department store was open only to customers wanting to access the ground floor for cosmetics, the 7th-floor food court or the penthouse hair salon.

While Milan looked like a ghost town compared to recent days, the fact so many businesses were allowed to operate and there is no restriction on getting outdoor exercise as in the first emergency phase meant many more people were on the streets than in the spring.

Luca Zaia, governor of the northern region of Veneto region, said that the deaths in his region were mostly among people over 70 while most infections were among the young, underlining the necessity for people to observe new rules even in one of the regions with the lightest restrictions.

“We are entering the most critical phase,’’ Zaia said, noting that if the situation worsens they will have to halt other medical procedures to find beds for COVID-19 patients.

European neighbors France and Germany are also imposing restrictions with an eye on easing pressure on strained health systems.

Germany’s health minister has warned of hard times ahead unless the country can “break” the rising trajectory of coronavirus cases, which has doubled the number of patients in intensive care in just 10 days and set a new record of over 21,500 new confirmed cases on Friday.

And the French government is supplying quick virus tests to nursing homes around the country, amid sharply rising numbers of infections and deaths in those homes in recent weeks, and to the nation’s biggest airport, Paris’ Charles de Gaulle. The tests, which look for a specific protein on the virus, are cheap and fast, but experts say they are also less accurate than the standard ones.

“The second wave is here, and it is violent,” French Health Minister Olivier Veran warned Thursday night, while urging people to respect a partial national lockdown..