The sun rises over Duisburg, seen from the neighbor city of Moers, Germany, Friday, Nov. 6, 2020. (Marcel Kuschdpa via AP)

ELECTION 2020 — Democrat Joe Biden is on the cusp of winning the presidency as he opens up narrow leads over President Donald Trump in the critical battlegrounds of Georgia and Pennsylvania. His path to 270 Electoral College votes strengthening, Biden plans a prime-time address to the nation. By Jonathan Lemire, Zeke Miller, Jill Colvin and Will Weissert. SENT: 854 words. UPCOMING: Developing, 950 words by 5 p.m., photos, video, audio. With: ELECTION 2020-THE LATEST, developing. 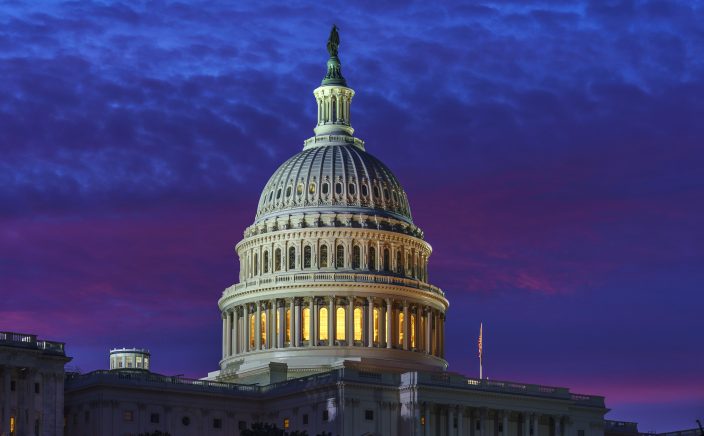 Find more coverage below and on the 2020 U.S. Elections featured topic page in AP Newsroom.

VIRUS OUTBREAK — The U.S. job market showed a burst of strength in October, with employers adding 638,000 jobs and the unemployment rate tumbling to 6.9%. Still, the pace of hiring isn’t enough to rapidly soak up the millions of Americans who were thrown out of work by the pandemic recession. By Christopher Rugaber. SENT: 950 words, photos. 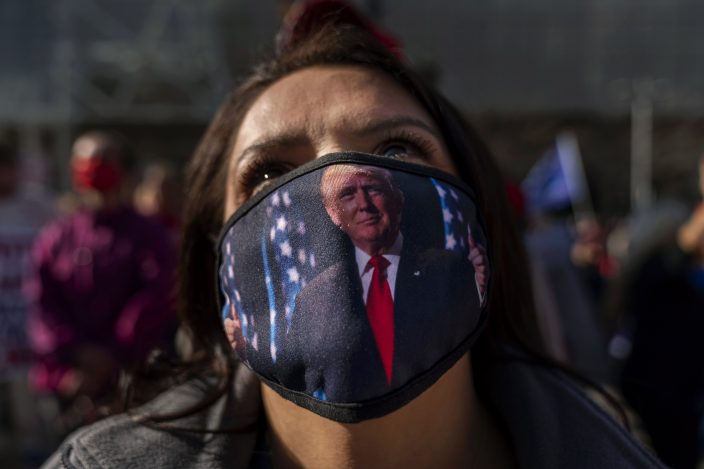 Trump supporter Teresa Rorick attends a protest against the election results outside the central counting board at the TCF Center in Detroit, Friday, Nov. 6, 2020. (AP PhotoDavid Goldman)

ETHIOPIA-MILITARY CONFRONTATION — Ethiopia’s prime minister says airstrikes have been carried out against the forces of the country’s well-armed Tigray region, asserting that the strikes in multiple locations “completely destroyed rockets and other heavy weapons.” Abiy Ahmed’s announcement on the state broadcaster marks another escalation in clashes that experts say could slide into civil war. By Cara Anna and Elias Meseret. SENT: 860 words, photos. With: AP EXPLAINS-ETHIOPIA-MILITARY CONFRONTATION — SENT: 880 words, photos. 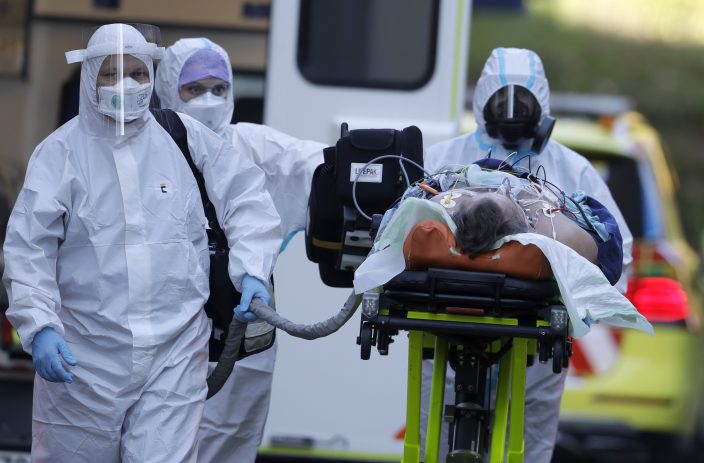 Healthcare workers move a COVID-19 patient to the Motol hospital in Prague, Czech Republic, Friday, Nov. 6, 2020. The hospital in Prague has admitted five patients in serious condition from hospitals that were overrun due to the coronavirus pandemic. (AP PhotoPetr David Josek)

FOOD-VIRTUAL-THANKSGIVING — Apart but together: tips for a cozier Zoom Thanksgiving. SENT: 860 words, photos.

TV-AL ROKER — Weatherman and morning TV co-host Al Roker has revealed that he has been diagnosed with prostate cancer and will be undergoing surgery to have his prostate removed. SENT: 240 words, photos.

ELECTION 2020-LEGAL CHALLENGES — President Donald Trump has repeatedly said there’s one place he trusts to determine the outcome of the presidential election: the U.S. Supreme Court. But Trump may face a hard road in getting to the court in the first place. By Jessica Gresko and Mark Sherman. SENT: 766 words. UPCOMING: Developing, 800 words by 4 p.m., photos.

ELECTION 2020-MILITARY BALLOTS — President Donald Trump has held himself up as a champion of U.S. troops without rival. Now with his presidency on the line, he’s targeting a tool of participatory democracy -- the mail-in-ballot -- that has allowed deployed U.S. military personnel to participate in elections since the War of 1812. By Aamer Madhani. UPCOMING: 800 words by 4 p.m., photos.

ELECTION 2020-RELIGIOUS VOTERS — President Donald Trump won support from about 8 in 10 white evangelical Protestant voters in his race for reelection. That’s according to the AP VoteCast, a survey of more than 110,000 voters nationwide. But Catholic voters split almost evenly between him and Democratic opponent Joe Biden. By Elana Schor and David Crary. SENT: 1,000 words, photos.

ELECTION 2020-LATINOS — Trump and his Republican allies made significant inroads with Latino voters in Tuesday’s election, alarming some Democrats who warned that immigration politics alone was not enough to hold their edge with the nation’s largest minority group. SENT: 1,170 words, photos.

PUERTO RICO-ELECTIONS — For the first time in decades, voters across Puerto Rico are still waiting for officials to confirm the winners of some of the most high-profile races days after the U.S. territory held its general election. SENT: 500 words, photos.

VIRUS-OUTBREAK-FRANCE — Virus pressure is mounting at French nursing homes, where more than 400 people with COVID-19 have died in the past week and some residents are again being confined to their rooms and cut off from their families. SENT: 480 words, photos.

FRANCE-VIRUS-OUTBREAK-STRUGGLING-BOOKSHOP — Shakespeare and Company, the iconic Paris bookstore that published James Joyce’s “Ulysses” in 1922, is appealing to readers for support after pandemic-linked losses and France’s spring lockdown have put the future of the iconic Left Bank institution in doubt. SENT: 710 words, photos.

VIRUS OUTBREAK-BOSNIA-WAR LEGACY — Memories of the Bosnian War are shaping Zdenka Sutalo’s perception of the coronavirus. The 58-year-old unemployed woman attends group therapy sessions to work through the trauma of the 1992-95 conflict. As a young woman in Sarajevo, she endured bombardment, hunger, electricity shortages and was forced to break off her university studies for good. Today she sometimes has to be reminded to see the novel virus as a serious risk. SENT: 680 words, photos.

VIRUS OUTBREAK-ONE GOOD THING-INDONESIA — When a garbage collector came to Ghina Ghaliya’s house in the Indonesian capital and asked if she had an old mobile phone his children could use to access the internet, it sparked an idea for a broader campaign to help students stuck at home by the coronavirus. SENT: 570 words, photos.

VIRUS-OUTBREAK-DENMARK-MINKS — More than a quarter million Danes went into lockdown in a northern region of the country where a mutated variation of the coronavirus has infected minks being farmed for their fur, leading to an order to kill millions of the animals. SENT: 330 words, photos.

TROPICAL-WEATHER — As the remnants of Hurricane Eta moved back over Caribbean waters, governments in Central America worked to tally the displaced and dead, and recover bodies from landslides and flooding that claimed dozens of lives from Guatemala to Panama. SENT: 815 words, photos.

LEBANON-U.S. SANCTIONS — The U.S. Treasury slapped sanctions on Lebanon’s former foreign minister and a leading Christian political ally of the militant Hezbollah group, singling him out for what it said was his role in corruption. SENT: 460 words, photos.

ISRAEL-PALESTINIANS — Israel has come under heavy criticism after the military demolished several homes and other structures in a Bedouin community in the occupied West Bank this week as much of the world’s attention was focused on the U.S. election. SENT: 660 words, photos.

AUSTRIA-VIENNA-ATTACK — German police raid the homes and businesses of four men linked to the Islamic State sympathizer who carried out a deadly attack in Vienna this week. SENT: 250 words, photos.

FRANCE-MUSLIM CHURCH GUARDS — A group of French Muslims decided to stand guard outside their town’s cathedral to protect it and show solidarity with Catholic churchgoers. SENT: 500 words, photo.

POLAND-CHURCH-SEX ABUSE — The Vatican has imposed sanctions on a prominent Polish cardinal, retired Archbishop Henryk Gulbinowicz, after he was accused of sexually abusing a seminarian and of covering up abuse in another case. SENT: 585 words, photo.

VATICAN-McCARRICK — The Vatican has set Tuesday for the release of its long-awaited report into what it knew about ex-Cardinal Theodore McCarrick’s sexual misconduct during his rise through the church hierarchy. SENT: 930 words, photos.

NETHERLANDS-TEACHER THREATENED — Dutch Prime Minister Mark Rutte says threats that forced a teacher in the port city of Rotterdam to go hiding after some students objected to a political cartoon displayed in his classroom must not be tolerated. SENT: 480 words, photo.

VENEZUELA-BILLBOARD ARTIST — The billboard spaces of vandalized bus stops in Venezuela’s capital have become an open-air gallery for an artist seeking to give some joy to people who have endured years of tumult and hardship. SENT: 340 words, photos.

OFFICERS SHOT-WISCONSIN — Police say a man suspected of shooting two police officers in Wisconsin and who is wanted in North Dakota for an attempted murder has been arrested following a large-scale manhunt. SENT: 380 words, photo.

POLICE SHOOTING-ILLINOIS — Suburban Chicago police did not immediately provide medical aid to a mortally wounded man an officer had just shot because they feared that he or his girlfriend could have a gun, according to police reports released this week. SENT: 330 words, photos.

OBIT-RAMSTAD — Longtime Minnesota congressman Jim Ramstad has died at age 74. He was a moderate Republican whose battle with alcoholism led him to become a champion of mental health and recovery issues. SENT: 430 words.

ALZHEIMER DRUG — One of the biggest drug decisions in decades is looming as U.S. regulators consider whether to approve the first medicine that’s claimed to slow mental decline from Alzheimer’s disease, the most common form of dementia. By Marilynn Marchione and Matthew Perrone. SENT: 950 words, photo.

FINANCIAL-MARKETS — Wall Street’s best week since April is taking its first breather on Friday, and stocks are slipping following their big rally on enthusiasm about the upside of potential gridlock in Washington. SENT: 500 words, photos.

FILM-JOHNNY DEPP-FANTASTIC BEASTS — Johnny Depp has exited the “Fantastic Beasts” franchise following his failed libel case against The Sun tabloid newspaper for a 2018 article that labeled him a “wife beater.” SENT: 320 words, photos.

BKL--WNBA-PLAYERS FREEZING EGGS — Sue Bird says, like other women, she was intimidated by the process of freezing her eggs. That changed in 2019 for the WNBA champion. At 40, Bird decided it was time. She is among a half-dozen WNBA players who have frozen their eggs, according to the players’ union. By Basketball Writer Doug Feinberg. UPCOMING: 800 words, photos by 3 p.m.

BBA--RED SOX-CORA — The Boston Red Sox will rehire Alex Cora as manager, the AP is told. The move will restore him to the dugout less than a year after the team let him go because of his role in the Houston Astros cheating scandal. By Jimmy Golen. SENT: 500 words, photos.

CAR--NASCAR-JOHNSON & KNAUS — Jimmie Johnson and Chad Knaus had no equal in their 17 seasons together. Both are retiring from active NASCAR competition Sunday after winning seven championships and 83 Cup races. By Auto Racing Writer Jenna Fryer. UPCOMING: 900 words, photos by 7 p.m. EST.

GLF--MASTERS — Talk about a Masters unlike any other. Nineteen months after Tiger Woods won his fifth green jacket, the Masters returns two weeks before Thanksgiving, the azaleas and dogwoods giving way to autumn leaves, with no fans in sight. By Golf Writer Doug Ferguson. SENT: 950 words, photos. For weekend use