For NASA, it marks the long-awaited start of regular crew rotations at the International Space Station, with private companies providing the lifts. There will be double the number of astronauts as the test flight earlier this year, and their mission will last a full six months.

“Make no mistake: Every flight is a test flight when it comes to space travel. But it's also true that we need to routinely be able to go to the International Space Station," NASA Administrator Jim Bridenstine said in welcoming the astronauts to Kennedy. 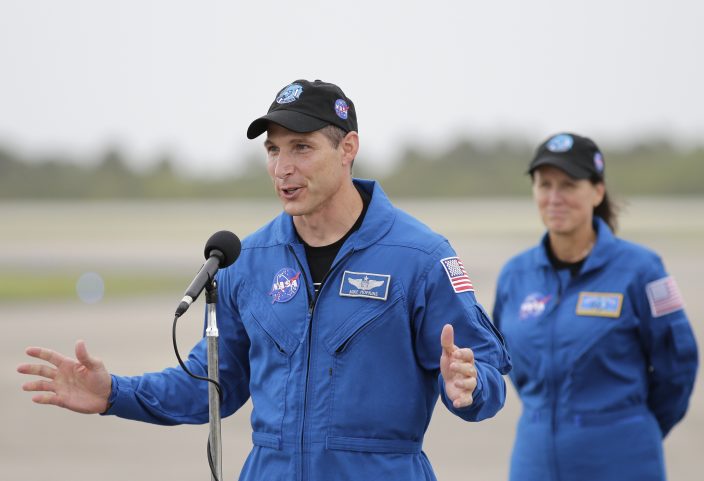 NASA Astronaut Michael Hopkins speaks as fellow crew member Shannon Walker looks on during a news conference after they arrived at the Kennedy Space Center, Sunday, Nov. 8, 2020, in Cape Canaveral, Fla. The astronauts will fly on the SpaceX Crew-1 mission to the International Space Station scheduled for launch on Nov. 14, 2020. (AP PhotoTerry Renna)

The crew of three Americans and one Japanese are scheduled to rocket away Saturday night, provided approaching Tropical Storm Eta doesn’t interfere. It will be a speedy trip to the space station, a six-orbit express lasting under nine hours.

The astronauts have named their Dragon capsule Resilience given all the challenges of 2020: coronavirus and social isolation, protests against racial injustice, and a particularly difficult election and campaign season. They have been in quarantine for a week or two and taking safety precautions — masks and social distancing — long before that.

“It's been a tough year for everybody for a lot of different reasons," crew commander Mike Hopkins said after flying in from Houston. “We felt like if the name of our vehicle could give a little hope, a little inspiration, put a smile on people's face, then that is definitely what we wanted to do.” 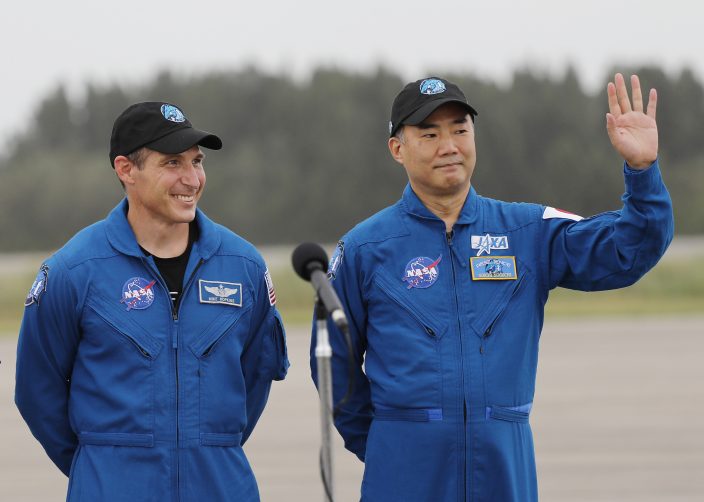 Astronaut Soichi Noguchi, right, of Japan, waves to the media as NASA Astronaut Michael Hopkins looks on during a news conference after they arrived at Kennedy Space Center, Sunday, Nov. 8, 2020, in Cape Canaveral, Fla. Four astronauts will fly on the SpaceX Crew-1 mission to the International Space Station scheduled for launch on Nov. 14, 2020. (AP PhotoTerry Renna)

The four will remain in orbit until spring, when their replacements arrive aboard another SpaceX Dragon capsule. The cargo version of the capsule also will keep making regular deliveries of food and supplies.

SpaceX’s Benji Reed said the company expects to launch seven Dragons over the next 14 months: three for crew and four for cargo.

“Every time there’s a Dragon launch, there will be two Dragons in space,” said Reed, director of crew mission management. 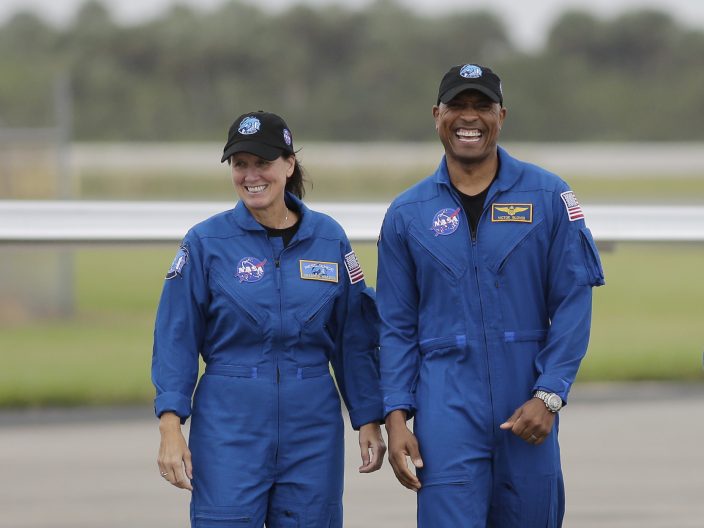 NASA's other hired taxi service, meanwhile, Boeing, isn’t expected to fly its first crew until next summer. The company plans a second unpiloted test flight in a couple months; the first one suffered so many software problems that the Starliner capsule failed to reach the space station.

SpaceX finally ended NASA’s nearly decade-long launch drought for astronauts last May, successfully delivering a pair of test pilots to the space station from Kennedy for a two-month stay. The returning capsule was scrutinized by SpaceX following its splashdown, resulting in a few changes for this second flight. 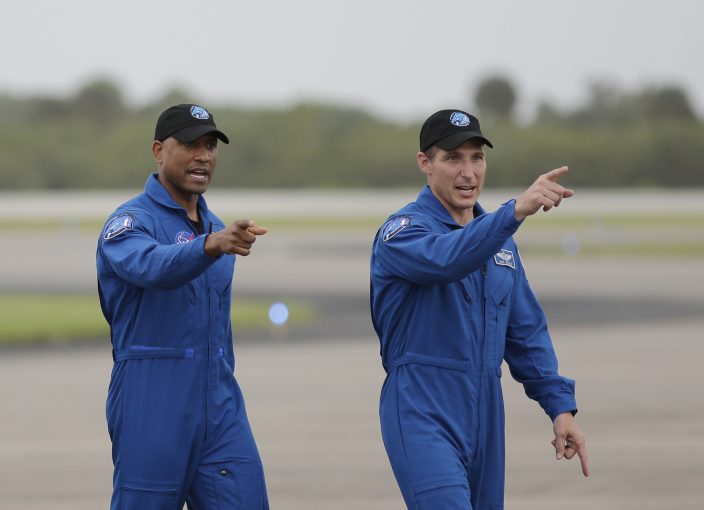 NASA Astronauts Victor Glover and Michael Hopkins walk from their airplane after arriving at the Kennedy Space Center, Sunday, Nov. 8, 2020, in Cape Canaveral, Fla. Four astronauts will fly on the SpaceX Crew-1 mission to the International Space Station scheduled for launch on Nov. 14, 2020 (AP PhotoTerry Renna)

Engineers discovered excessive erosion in the heat shield from the searing reentry temperatures; the company shored up the vulnerable section for the upcoming launch, said SpaceX’s Hans Koenigsmann, a vice president. Improvements also were made to the altitude-measuring system for the parachutes, after the chutes opened a little too low on the first astronaut flight. More recently, the Falcon rocket had two engines replaced because of contamination from a red lacquer used in processing. The engine swaps delayed the flight two weeks.

Perhaps the biggest surprise from the first SpaceX crew flight was all the private boats full of gawkers who surrounded the capsule in the Gulf of Mexico following splashdown in August. Koenigsmann promises a bigger keep-out zone and more patrols for future returns.

The second crew has three veteran fliers and one first-timer:

— Hopkins, 51, is an Air Force colonel and former space station resident who grew up on a hog and cattle farm in Missouri.

— Navy Cmdr. Victor Glover, 44, is the pilot and the lone space rookie; he's from the Los Angeles area and will be the first African American astronaut to move into the space station for a long stay.

— Shannon Walker, 55, a Houston-born-and-raised physicist, also has lived before on the space station; her husband, retired astronaut Andrew Thomas, helped build the outpost.

— The Japanese Space Agency’s Soichi Noguchi, 55, another former station resident, will become the first person in decades to launch on three kinds of rocketships; he's already flown on a U.S. space shuttle and Russian Soyuz.

They will join two Russians and one American who arrived at the space station last month from Kazakhstan.

Hopkins and his crew will ride to the launch pad in Teslas — SpaceX founder Elon Musk’s other company — in spacesuits color-coordinated with the spacecraft. But beneath all the good looks is “lots of amazing capability,” according to Glover.

“It’s a very sleek capsule. But it’s got the advantage of having great leaps in technology since the last time we built spacecraft here in this country,” Walker said in a recent interview with The Associated Press.

Noguchi, who along with Walker joined the crew just this year, is particularly excited about riding a Dragon. In Japan, the dragon is an esteemed mythical creature — “almost a ride to the heaven.”

“It’s quite a privilege to learn how to train the Dragon actually, how to ride a Dragon,” he said. “SpaceX did pretty good job teaching from scratch to dragon rider in six months.”