Josh Allen regained his early-season groove by throwing three touchdown passes and scoring one rushing, and the Buffalo Bills beat the Seattle Seahawks 44-34 on Sunday.

Buffalo (7-2) matched its best record through nine games since 1993, a season that ended with the Jim Kelly-led Bills making their fourth consecutive, and final, Super Bowl appearance. 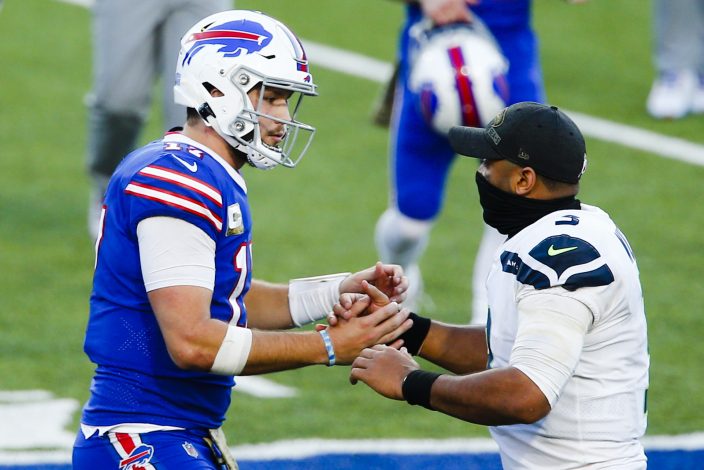 Allen finished 31 of 38 and equaled a career best set earlier this season with 415 yards passing, becoming the first Bills player to top 300 yards four times in one season since Drew Bledsoe did it seven times in 2002. The Bills offense came alive after Allen combined for just 846 yards passing and five touchdowns — including one rushing — in splitting the previous four games.

The Seahawks (6-2) blew an opportunity to match to match their best record through eight games. They were 7-1 in 2013.

Seattle became the NFL’s sixth team to score 25 or more points in each of its first eight games, but was undone by turnovers and a defense that surrendered 420 yards. 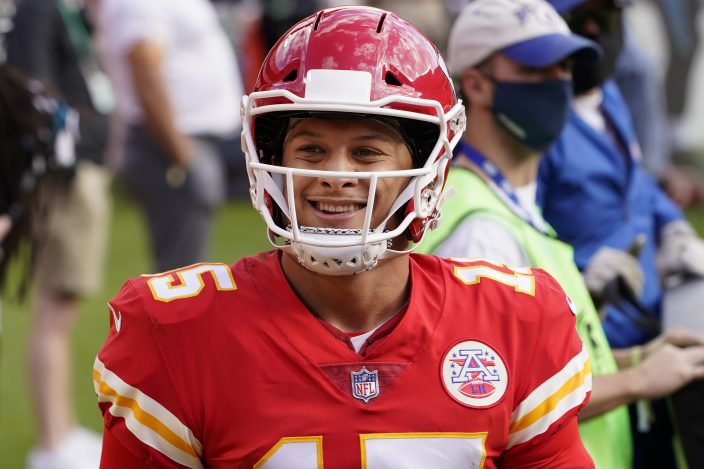 The 44 points allowed were the most in coach Pete Carroll’s 11 seasons in Seattle and the most for the franchise since a 48-10 loss at Green Bay on Dec. 27, 2009. It was just the eighth time since Week 9 of the 2011 season the Carroll-led Seahawks have lost by 10 points or more.

Patrick Mahomes threw for 372 yards and four touchdowns, Travis Kelce and Tyreek Hill each went over 100 yards receiving, and Kansas City held on to beat Carolina when Joey Slye missed a 67-yard field-goal attempt wide right on the final play.

The Chiefs (8-1) were left clinging to the lead when Christian McCaffrey, just back from his ankle injury, scored from a yard out with 1:26 to go. The Panthers’ onside kick was recovered by Kansas City, but they used their three timeouts to get the ball back, and Teddy Bridgewater’s 23-yard pass to Curtis Samuel with 9 seconds remaining gave them hope.

Carolina (3-6) tried to get a bit closer with a pass to McCaffrey, but the incompletion brought on Slye, who had plenty of leg with the wind behind him. His kick dropped just outside the uprights, though, allowing the Chiefs to escape.

McCaffrey finished with 18 carries for 69 yards and a touchdown while catching 10 passes for 82 yards and another score. Bridgewater threw for 310 yards and two TDs with Samuel catching nine balls for 105 yards and the other score.

Kelce had 10 catches for 159 yards and Hill had nine for 113 and a pair of scores, helping the pass-happy Chiefs climb out of an early 14-3 hole and head into their bye with a bunch of new milestones and a big surge of momentum.

Lamar Jackson turned up the tempo in the second half, and Baltimore broke the NFL record for consecutive 20-point games in its win over Indianapolis.

After Gus Edwards’ 1-yard plunge gave Baltimore the lead midway through the third quarter, Jackson sealed the win with a 9-yard TD run.

Baltimore has won 10 straight road games, the league’s longest active streak, and earned the franchise’s first win at Indianapolis in seven tries. The Ravens also had lost 20 straight games when trailing at halftime.

It was the first home loss for Indy (5-3) this season.

And, not surprisingly, the league’s reigning MVP turned the game this time by starting the second half with no-huddle against a stingy Colts defense. It changed everything after a sluggish first half in which the Ravens' defense kept them in the game.

The Titans (6-2) avoided their longest skid since Tannehill took over as starting quarterback and stayed atop the AFC South going into Thursday night’s division showdown against Indianapolis.

They got big help from an undermanned and struggling defense missing three-time Pro Bowl linebacker Jadeveon Clowney with an injured knee.

Cornerback Desmond King picked up a fumble and ran 63 yards for a TD only days after the Titans picked up the 2018 All-Pro from the Chargers for a sixth-round pick. King didn’t join Tennessee until Saturday after clearing COVID-19 testing protocols and put the Titans up 17-0 late in the third quarter.

The Bears (5-4) came in trailing Green Bay in the NFC North dealing with their own injuries and COVID-19 issues. Chicago lost its third straight despite the defense coming up with three sacks and holding the NFL’s fifth-best offense to a season-low 228 yards.

Nick Foles made it interesting with a pair of TD passes within the final minutes. Amani Hooker recovered the Bears’ onside kick attempt for Tennessee with about a minute left.

Dalvin Cook kept his brilliant season rolling by rushing for a career-high 206 yards and two scores on 22 carries, leading Minnesota past Detroit.

Kirk Cousins threw for three touchdowns — two to tight end Irv Smith Jr. — in his second straight turnover-free performance for the Vikings (3-5), who averaged 8.9 yards per play on the way to their first home win this season.

Lions quarterback Matthew Stafford, who didn’t practice all week due to coronavirus exposure protocols, left the game in the fourth quarter for concussion evaluation after taking a knee to the head during a sack. He was picked off on consecutive possessions in the third quarter, first at the Minnesota 12 and then in the end zone. Chase Daniel threw another interception after taking over.

The show again belonged to Cook, though, with his predecessor Adrian Peterson watching from the opposite sideline. Cook, whom Peterson admiringly called “a lethal weapon” this week, has 478 yards and six touchdowns from scrimmage in two games since missing one with a groin injury.

Peterson had eight carries for 29 yards while again dropping behind rookie D’Andre Swift in the pecking order for the Lions (3-5), who lost their ninth straight division game and are 2-13 against the NFC North under coach Matt Patricia. He’s 0-5 against the Vikings.

Daniel Jones completed his longest pass of the season, didn't turn the ball over and New York held on to beat Washington.

Jones was 23 of 34 for 212 yards, including a 50-yard connection with Austin Mack and a touchdown pass to Evan Engram to build a 17-point halftime lead. The Giants (2-7) attempted to run things out in the second half and survived a couple of touchdown drives led by Alex Smith, who replaced injured Washington quarterback Kyle Allen.

Smith connected with Terry McLaurin on a 68-yard score, his first TD pass in 728 days, to cut New York’s lead to 23-20 in the fourth quarter. But Smith threw two interceptions in the final 2:18 to end the threat for Washington (2-6). Both Giants wins are against Washington.

Before things got hairy for the Giants, Wayne Gallman rushed for a touchdown, and Graham Gano made three field goals to extend his streak to 18 in a row.

Allen injured his left ankle late in the first quarter, forcing Smith into just his second NFL game since gruesomely breaking his right leg in November 2018.

Deshaun Watson had touchdowns passes of 57 and 77 yards, the second one appearing to come after the play clock expired, and Houston beat Jacksonville for its sixth straight win in the series.

Jacksonville (1-7) lost its seventh straight and barely avoided making NFL history. The Jaguars would have become the first to allow at least 30 points in seven consecutive games in a single season. Instead, they will share the record with the 1968 Denver Broncos and the 1984 Minnesota Vikings.

Jacksonville had a chance to tie it late, but rookie Jake Luton’s 2-point conversion pass to DJ Chark landed at his feet. Luton, a sixth-round draft pick making his NFL debut in place of Gardner Minshew, scrambled for 13 yards to make it a two-point game with 1:39 remaining.

Luton stiff-armed rookie Jon Greenard and then spun away from Keion Crossen and into the end zone. Crossen recovered an onside kick that helped Houston (2-6) ice the game.

Both of Houston’s victories this season came against the Jaguars.

Watson was instrumental in each. He threw for 281 yards and two scores in this one, which came three weeks after his 301-yard, two-touchdown passing performance in Houston.

Barça misses 2 penalties but advances past Cornellà in ...