British Prime Minister Boris Johnson says he is as “fit as a butcher’s dog” after being instructed to self-isolate for 14 days because he recently came in contact with someone who has since contracted coronavirus.

In a video message posted Monday on Twitter from his London apartment at Downing Street, Johnson said it didn’t matter that he has already endured COVID-19 and is “bursting with antibodies.”

The quarantine requirement comes at the start of a crucial week for Johnson’s Conservative government that includes discussions over a post-Brexit trade deal with the European Union. Negotiators are meeting in Brussels this week with time on a deal fast running out. 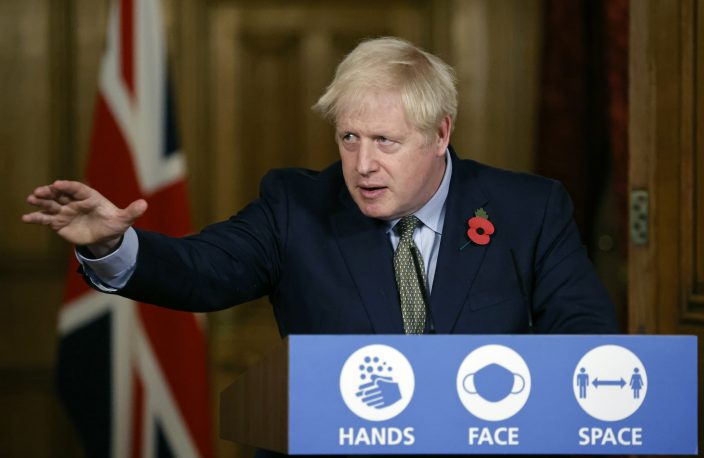 FILE - In this Nov. 9, 2020 file photo Britain's Prime Minister Boris Johnson reaches out during a virtual press conference on the coronavirus pandemic at 10 Downing Street in central London. Johnson is self-isolating after being told he came into contact with someone who tested positive for the coronavirus, officials said Sunday Nov. 15. "He will carry on working from Downing Street, including on leading the government's response to the coronavirus pandemic," a statement from his office said. (Tolga Akmen Pool via AP, File)

Johnson, who contracted the virus in April and spent three days in intensive care as his symptoms worsened, met with a small group of lawmakers for about a half-hour on Thursday, including one, Lee Anderson, who subsequently developed symptoms and tested positive.

Johnson was notified by the National Health Service’s Test and Trace system Sunday and told he should self-isolate because of factors including the length of the meeting.

“We’ve got to interrupt the spread of the disease and one of the ways we can do that now is by self isolating for 14 days when contacted by Test and Trace,” Johnson said. 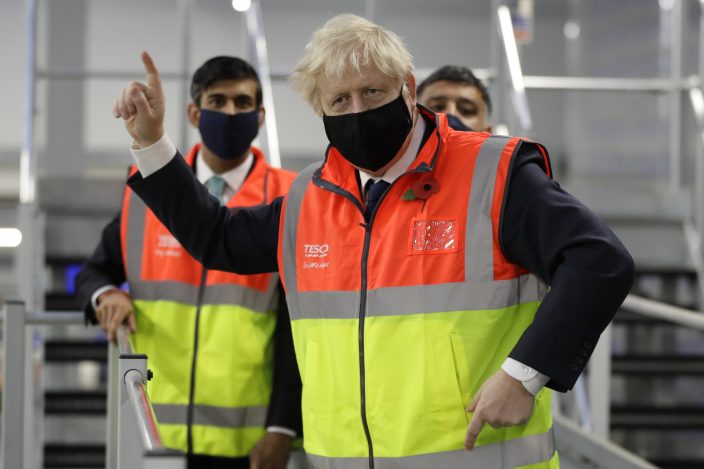 FILE - In this Nov. 11, 2020 file photo Britain's Prime Minister Boris Johnson, and Chancellor Rishi Sunak during a visit to a tesco.com distribution centre in London. Johnson is self-isolating after being told he came into contact with someone who tested positive for the coronavirus, officials said Sunday Nov. 15. "He will carry on working from Downing Street, including on leading the government's response to the coronavirus pandemic," a statement from his office said. (AP PhotoKirsty Wigglesworth, File)

Health Secretary Matt Hancock said it was right that the prime minister goes into self-isolation even though he’s already had coronavirus as people “can catch it twice.”

"The prime minister is following exactly the same rules as every other person in the country," Hancock told BBC Radio.

Hancock also brushed aside suggestions that Downing Street is not following the advice it preaches as pictures emerged of Johnson with Anderson posing for a photograph seemingly less than two meters (6 1/2 feet) apart.

“The critical thing is that when somebody gets coronavirus, the turnaround of the system is rapid,” Hancock said.

He told BBC Radio there have been more than 25 confirmed cases of COVID-19 reinfection globally, but that he thought the actual rate of reinfection is "quite a lot higher than that, but not enormous.”

“I think my bottom line is not to be alarmist because whatever the risk is, it is low," he said. “My sense from some of our data and other people’s data is that it’s the people who’ve made the poorest and most negligible antibody response the first time round who are most at risk of reinfection.”