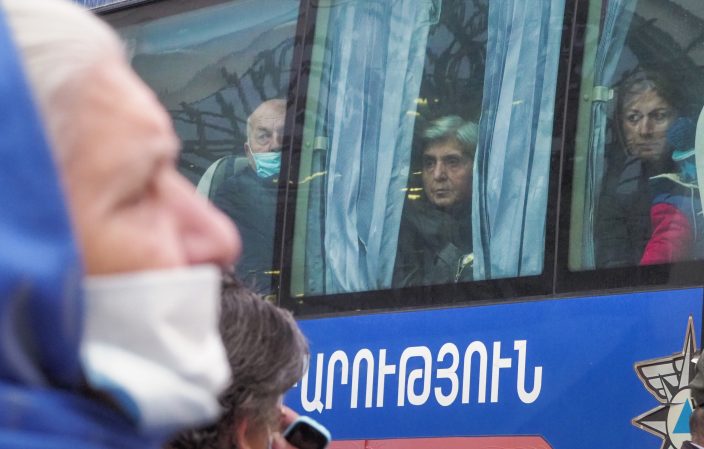 Ethnic Armenians look out from a bus returning to Stepanakert, the capital of the separatist region of Nagorno-Karabakh in Yerevan, Armenia, Monday, Nov. 16, 2020. Armenia and Azerbaijan have agreed to halt fighting in the Nagorno-Karabakh region of Azerbaijan under an agreement signed with Russia that calls for deployment of nearly 2,000 Russian peacekeepers and territorial concessions. (AP PhotoDmitri Lovetsky)

VIRUS OUTBREAK — A second experimental COVID-19 vaccine — this one from Moderna Inc. — yielded extraordinarily strong early results Monday, another badly needed dose of hope as the pandemic enters a terrible new phase. Moderna said its vaccine appears to be 94.5% effective, according to preliminary data from an ongoing study. A week ago, competitor Pfizer Inc. announced its own vaccine looked 90% effective — news that puts both companies on track to seek permission within weeks for emergency use in the U.S. By Lauran Neergaard. SENT: 1,000 words, photos. With: VIRUS OUTBREAK-US-SURGE — Virus death toll in Texas tops 20,000, states and cities roll out new restrictions on public gatherings. UPCOMING: 700 words, photos. Developing.

VIRUS OUTBREAK-POLITICS — With the nation gripped by a resurgent coronavirus and looking to Washington for help, the message from President Donald Trump and lawmakers in Congress is: Just keep waiting. The urgency of the public health crisis is not resonating in the nation’s capital, where Trump is more fixed on getting credit for anything that goes right and blocking President-elect Joe Biden from getting the information needed to ensure the new administration can smoothly take over the fight against the pandemic. By Zeke Miller and Andrew Taylor. UPCOMING: 980 words by 5 p.m. photos. 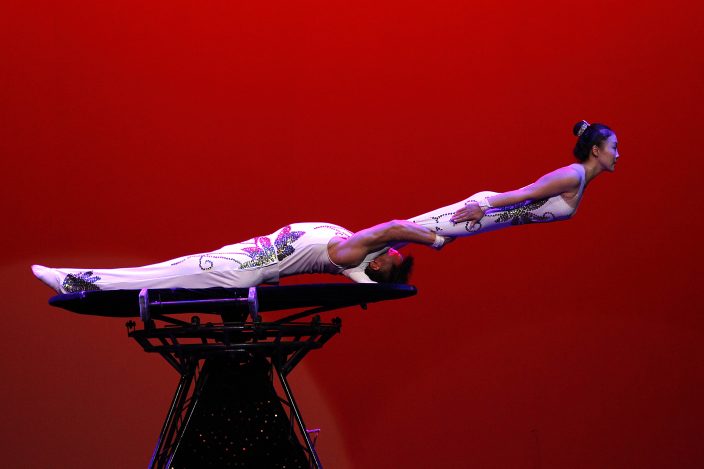 VIRUS-OUTBREAK-WHO — The World Health Organization has recorded 65 cases of the coronavirus among staff based at its headquarters, including five people who worked on the premises and were in contact with one another, an internal email obtained by The Associated Press shows. The U.N. health agency said it is investigating how and where the five people became infected — and that it has not determined whether transmission happened at its offices. By Maria Cheng and Jamey Keaten. SENT: 750 words, photos.

BIDEN — President-elect Joe Biden is acknowledging that the nation is in a “dark” place but says his administration will strengthen the vulnerable economy despite the exploding pandemic. Biden offered an optimistic assessment of the next four years during a meeting with several business and labor leaders ahead of an afternoon economic address from his makeshift headquarters in Delaware. By Steve Peoples. SENT: 740 words, photos.

HATE CRIMES — Hate crimes in the U.S. rose to the highest level in more than a decade as federal officials also recorded the highest number of hate-motivated killings since the FBI began collecting that data in the early 1990s, according to an FBI report released Monday. SENT: 580 words, photos. 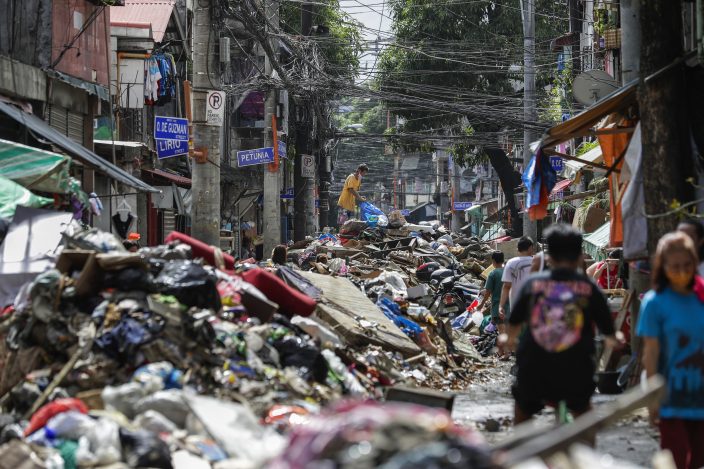 Residents climb over piles of debris washed in floodwaters from Typhoon Vamco in Marikina, Philippines on Monday, Nov. 16, 2020. Typhoon Vamco left dozens of people dead as it swelled rivers and flooded low-lying areas while it passed over the capital and storm-battered northeast Philippines, where rescuers were deployed last week to help people flee the rising waters. (AP PhotoAaron Favila) 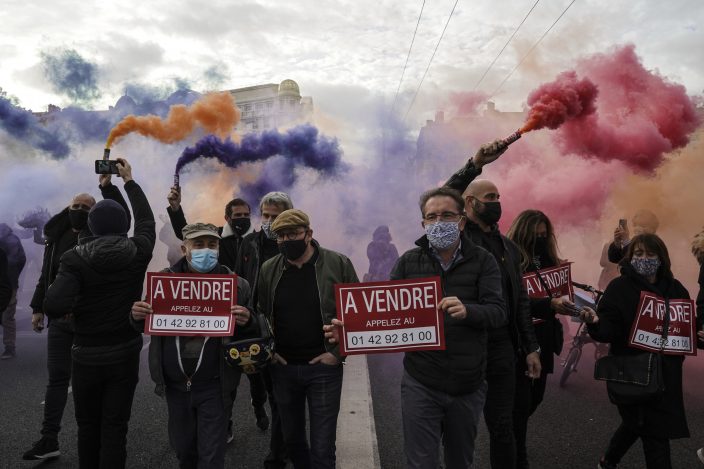 Shop, bar and restaurant owners hold banners reading 'For Sale - call' with the Elysee phone number below during a demonstration against the closure of their establishments in Lyon, central France, Monday, Nov. 16, 2020. France's health minister says the country is "progressively getting back in control" of its resurgent coronavirus epidemic but warns that it will quickly flare again if people start ignoring lockdown rules. (AP PhotoLaurent Cipriani)

VIRUS OUTBREAK-MALL SANTAS — Santa Claus is coming to the mall — just don’t try to sit on his lap. Malls are doing all they can to keep the jolly old man safe from the coronavirus, including banning kids from sitting on his knee, completely changing what a Santa visit looks like. Kids will have to tell him what they want for Christmas from six feet away, and sometimes from behind a sheet of plexiglass. SENT: 920 words, photos. This is the Tuesday Spotlight.

VIRUS-DIARY-OUTBREAK-DIARY-CAPITOL-COMFORT — One reporter takes morning runs on Capitol Hill each day. These days, near the end of the run, he passes workers who are busy erecting the stage, bleachers and tower for TV cameras for the presidential inaugural. This year, he finds that sight especially reassuring. SENT: 640 words, photos.

VIRUS-OUTBREAK-MICHIGAN — Michigan Gov. Gretchen Whitmer says she has the authority to issue a second stay-at-home order to curb the spiking coronavirus if necessary and called a comment by an adviser to President Donald Trump urging people to “rise up” against the state’s latest restrictions “incredibly reckless.” SENT: 420 words, photos;

BRITAIN POLITICS — British Prime Minister Boris Johnson says he is as “fit as a butcher’s dog” after being instructed to self-isolate for 14 days because he recently came in contact with someone who has since contracted coronavirus. In a video message posted on Twitter from his London apartment at Downing Street, Johnson said it didn’t matter that he has already endured COVID-19 and is “bursting with antibodies.” SENT: 410 words, photos.

VIRUS-OUTBREAK-BELGIUM-NURSING HOMES — Amnesty International said Belgium authorities “abandoned” thousands of elderly people who died in nursing homes during the coronavirus pandemic in a report Monday that described those actions as “human rights violations.” Between March and October, Amnesty International said “a staggering 61.3% of all COVID-19 deaths” in Belgium took place in nursing homes. SENT: 750 words, photos.

VIRUS-OUTBREAK-GREECE-BISHOP'S DEATH — A senior clergyman in Greece’s Orthodox Church has been buried after dying of COVID-19, reviving a debate over the safety of receiving communion ahead of the Christmas holiday. Metropolitan Bishop Ioannis of Lagadas, 62, was an outspoken advocate of maintaining communion ceremonies — at which worshipers are given bread and wine with a shared spoon — during the pandemic, arguing that there was no risk of transmission. SENT: 350 words.

AFRICA-VIRUS-OUTBREAK-BACK TO SCHOOL — As schools reopen in some African countries after months of lockdown, relief is matched by anxiety over everything from how to raise tuition fees amid the financial strain wrought by the COVID-19 pandemic to how to protect students in crowded classrooms. Although the pandemic has disrupted education around the world, the crisis is more acute in Africa, where up to 80% of students don’t have access to the internet and distance learning is out of reach for many. SENT: 760 words, photos.

THE EVER-PRESENT PRESIDENCY — You can adore Donald Trump or despise him. But there’s one thing it has been almost impossible to do with the president of the United States these past four years: ignore him. As another administration prepares to take the reins, it’s hard to imagine a Joe Biden presidency generating as much drama or commanding as much daily mindshare. Or have the Trump years forever changed the place the presidency occupies in American life and Americans’ lives? Only time will tell. SENT: 1,080 words, photos.

ELECTION 2020-WOMEN — From nearly the moment Donald Trump took the presidential oath, it was women who were the face of the resistance -- marching in enormous numbers in their pussy hats and fueling Democratic gains in the 2018 midterm elections. In 2020, many had expected a dramatic repudiation of Trump with a widened gender gap. The results were a bit more complicated. SENT: 1,260 words, photos.

SEC CHAIRMAN-TRUMP — Jay Clayton, a former Wall Street lawyer who has headed the Securities and Exchange Commission as the financial markets’ top regulator during the Trump administration, is leaving the position at year’s end, the SEC announced. SENT: 330 words, photos.

TRUMP-FACT CHECK — In the face of conclusive evidence that he lost, President Donald Trump is claiming “I won.” His tweet sought to perpetuate the mathematically impossible and thoroughly debunked myth that he pulled out a victory from the election that definitively chose Democrat Joe Biden as the next president. SENT: 519 words. UPCOMING: Developments possible.

ELECTION 2020-PENNSYLVANIA — President Donald Trump’s campaign is withdrawing a central request in its lawsuit seeking to stop the certification of the election results in Pennsylvania, where Democrat Joe Biden beat Trump to capture the state and help win the White House. SENT: 677 words, photos.

SENATE DEMOCRATS-TOUGH MAP — Pinned six years in the minority, Democrats have an uphill but real shot at wresting Senate control in January, with more opportunities in 2022. Yet as states increasingly sort themselves along hardening partisan lines, it’s complicating Democrats’ drive to win the majority and keep it. SENT: 997 words, photos.

CONGRESS-SOCIAL MEDIA — The CEOs of Facebook and Twitter are coming before Congress to defend their handling of disinformation in the contest between President Donald Trump and Democrat Joe Biden, even as lawmakers questioning them are deeply divided over the integrity and results of the election itself. SENT: 767 words, photos.

TROPICAL WEATHER — Hurricane Iota is now a dangerous Category 5 storm that is likely to bring catastrophic damage to the same part of Central America already battered this month by powerful Hurricane Eta. Iota rapidly intensified overnight into a mighty system over the western Caribbean, headed toward Nicaragua and Honduras. SENT: 770 words, photos.

SUDAN-ETHIOPIA — The U.N. refugee agency says Ethiopia’s growing conflict has resulted in more than 25,300 refugees fleeing from the Tigray region into Sudan as fighting spilled beyond Ethiopia’s borders and threatened to inflame the Horn of Africa region. SENT: 530 words, photos.

PERU-POLITICAL-CRISIS — Who is the president of Peru? The answer to that question Monday was no one. The Latin American nation’s political turmoil took a chaotic turn when interim leader Manuel Merino quit and Congress couldn’t decide on his replacement. SENT: 850 words, photos.

BOY SCOUTS-BANKRUPTCY — Close to 90,000 sex abuse claims have been filed against the Boy Scouts of America as the deadline arrived for submitting claims in the organization’s bankruptcy case. The number filed by Monday far exceeds initial projections of lawyers who have been signing up clients since the Boy Scouts filed for bankruptcy protection in February in the face of hundreds of lawsuits alleging decades-old sex abuse by Scout leaders. SENT: 675 words, photos.

VIRUS OUTBREAK-ONE-GOOD-THING-BEDTIME-READING — On the eve of each football game for the Minnesota Gophers, the team-wide meeting has become a real page-turner. Minnesota coach P.J. Fleck will often use a children’s book to help highlight a theme. Before Minnesota beat Illinois for its first win of the season, Fleck read from, “Everyone Poops,” a popular story for toilet-training toddlers. His message? Even unpleasant things can be repurposed for good. SENT: 560 words, photos.

COLLEGE ADMISSIONS-BRIBERY — The former fencing coach at Harvard and a wealthy Maryland businessman have been arrested on accusations that the coach accepted $1.5 million in bribes in exchange for helping the businessman get his two sons into the Ivy League school as recruited fencers. SENT: 470 words.

FINANCIAL MARKETS — Stocks are rallying again, with the S&P 500 adding more to its record high and the Dow Jones Industrial Average on track to erase the last of its pandemic losses, following another round of encouraging data on a possible coronavirus vaccine. SENT: 750 words, photos. UPCOMING: Will be updated through market close, about 800 words by 5 p.m.

TV-Q&A-JONATHAN SCOTT — As half of the “Property Brothers,” Jonathan Scott is all about transforming interior spaces. Now he’s revealing a massive space he’d like to transform — the Earth. SENT: 760 words, photo.

BRITAIN-VIDEO GAMES — Time spent playing video games can be good for mental health, according to a new study by researchers at Oxford University. SENT: 330 words, photo.

BKC-VIRUS-OUTBREAK-NCAA-Tournament — The NCAA says it plans to hold the entire 2021 men’s college basketball tournament in one geographic location to mitigate the risks of COVID-19. SENT: 450 words, photos. UPCOMING 700 words, photos by 6 p.m.

BKN--NBA DRAFT-BIGS — James Wiseman was considered a possible No. 1 overall NBA draft pick before he ever played in college. The Memphis freshman is the headliner of the big men in Wednesday’s draft, a group that includes USC’s Onyeka Okongwu and Maryland’s Jalen Smith. UPCOMING: 750 words, photos by 4 p.m..