While reiterating that he's not about to bench his struggling second-year quarterback, Fangio said Monday that Lock might miss Wednesday's practice and that his availability also is uncertain for Sunday when the Broncos (3-6) host the Miami Dolphins (6-3).

“Like with many injuries, the next day is worse than the actual injury during the competition, so he’s pretty sore today with the ribs and we’ll see where he’s at on Wednesday," Fangio said. 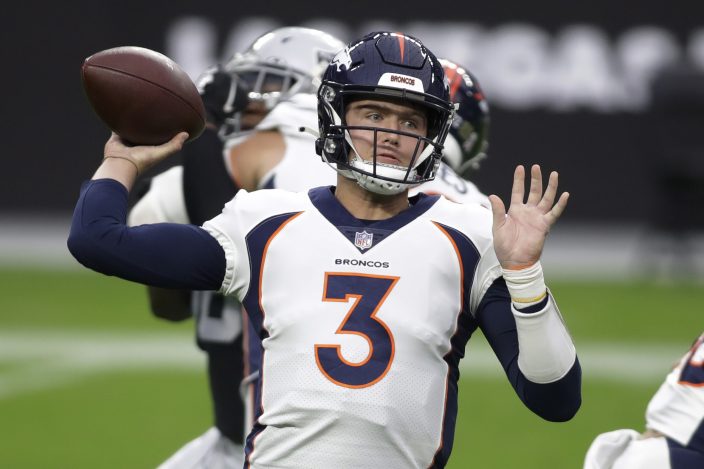 Denver Broncos quarterback Drew Lock (3) looks to throw against the Las Vegas Raiders during the first half of an NFL football game, Sunday, Nov. 15, 2020, in Las Vegas. (AP PhotoIsaac Brekken)

The more practice snaps he misses the greater the chances that backup Brett Rypien gets his second career start.

“We definitely want Drew to have a good week of preparation so that he’s ready to play the game,” Fangio said. “So, that could enter into the equation as we go through the week.”

Lock, who threw four interceptions in Denver's 37-12 loss at Las Vegas on Sunday, grimaced in pain for much of the afternoon after a blindside tackle by Arden Key in the second quarter. Afterward, he dismissed questions about being hurt, saying, “I'm fine, I'll be good.”

Fangio said Lock and the training staff didn't feel his injury was serious enough for him to leave the game, adding his offensive assistants kept a keen eye on Lock and “didn't think he was laboring at all or favoriting it.”

On Monday, Fangio said, “I don't think anybody questions Drew's toughness and desire and want-to. He said he felt fine, we didn't see him favor it. But that's the way it is with a lot of injuries. During the game, it doesn't feel bad. It's the next day and two days later where the full extent of it can be worse.”

Fangio also said after the game Sunday that he didn’t consider benching Lock, who’s thrown 10 interceptions in the five games he’s started since missing a month with a strained right rotator cuff.

On Monday, Fangio reiterated his position that allowing Lock to work through his problems was better than having him watch from the sideline to recalibrate his play.

“I just think he’s at the point now where he’s watched a lot,” Fangio said. “Last year, he’s out for 11 weeks (with a thumb injury) and did a good bit of watching then, got to finish the season last year. He missed three games this year, got to do a lot of watching then.

“I think he’s at the point where he’s got to play to get through this funk that our entire team is going through, not just offense, and for him to improve and for him to grow.”

NOTES: Fangio said DE Shelby Harris, who tested positive for COVID-19 last week, would likely miss his third straight game. He also said he doubted DC Ed Donatell would be back this week. Donatell has been in COVID-19 protocols since Nov. 1.

Gary Sánchez has impressed the New ...