All of these factors preceded Joseph’s firing from his first head coaching job after he went 11-21 in 2017-18 and was replaced by Fangio, another first-time head coach, who is now 10-15. 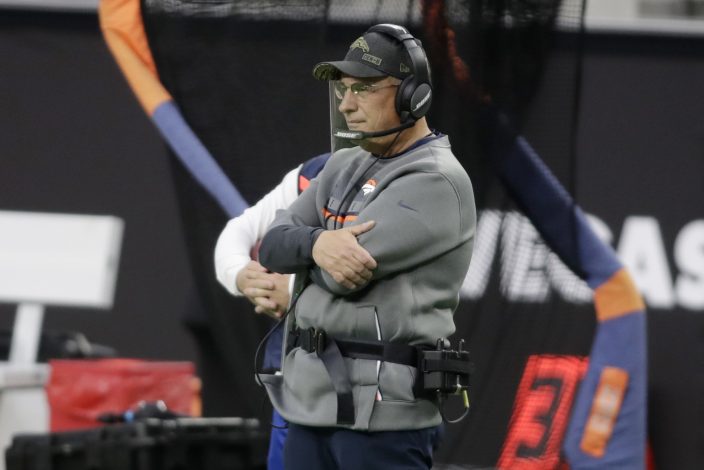 Denver Broncos head coach Vic Fangio watches from the sideline during the first half of an NFL football game against the Las Vegas Raiders, Sunday, Nov. 15, 2020, in Las Vegas. (AP PhotoIsaac Brekken)

The Broncos are 3-6 for the fourth consecutive season.

Last year, Fangio turned to rookie Drew Lock in December and the Broncos closed out the season by winning four of five to finish 7-9 and seemingly on the upswing. With four interceptions in Denver’s 37-12 loss at Las Vegas, Lock has now been picked off 10 times in five games since returning from a strained right rotator cuff that sidelined him for a month.

Fangio appeared to put offensive coordinator Pat Shurmur on notice when he was asked after the game how Lock could regain his confidence.

“You’ve got to go back to work and he’s got to start experiencing good play,” Fangio said. “We’ve got to devise our passing game and our offense and our running game to where he can be more successful.”

Even if Shurmur tweaks his schemes to better fit Lock’s skills, recovering from another slow start to post their first winning season since 2016 looks like a daunting task for the Broncos.

“We’ve got to get regrouped and refocused and get our energies and our emotions pointed in the right direction,” Fangio said.

A lot of jobs could depend on it.

“We’re not playing well enough now in the special teams area as a whole," said Fangio, adding, "we aren’t in any of our three phases.”

CB Bryce Callahan returned from an ankle injury and provided just about the only highlights, continuing a solid season after he missed all of last year with a foot injury.

“It would be a lot better if we were getting wins, too, because then I could celebrate it,” Callahan said.

Lock, who is now 6-6 as a starter with 14 touchdowns and 13 interceptions and is regressing in way too many categories.

144 — points the Broncos have allowed to their past four opponents, an average of 36 a game.

21 — giveaways by the Broncos, five more than all of last season.

1. Come up with a better game plan for Lock knowing Brett Rypien might get the start if Lock's bruised ribs keep him off the practice field too much.

2. Prepare for Tua Tagovailoa and the resurgent Dolphins knowing Harris likely will miss his third straight game and Donatell his fourth because of the novel coronavirus.

3. Clean up special teams play so the struggling offense and defense have a chance.