For a change, the responsibility wasn’t on the Seattle Seahawks' defense.

It wasn’t great, but Seattle’s 23-16 loss to the Los Angeles Rams on Sunday — the Seahawks' second straight loss — rested squarely on the continued mistakes by Russell Wilson.

Forget the MVP talk. Right now, the Seahawks are more concerned with the mistakes of their quarterback and whether the problems of the past few weeks can be corrected before a massive Thursday night game against division rival Arizona. 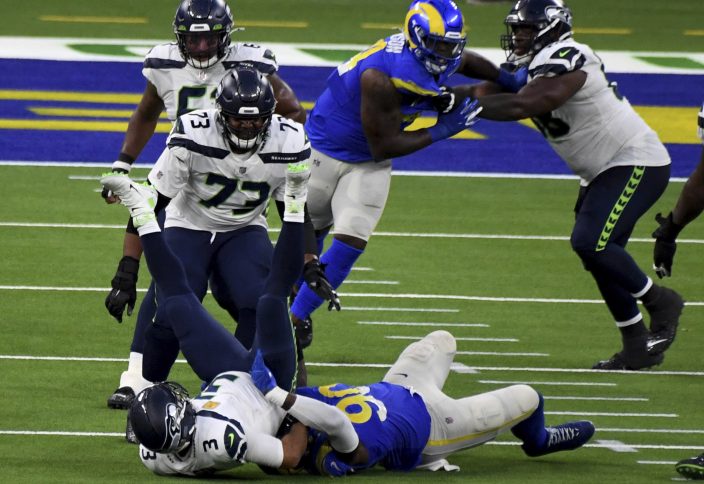 Wilson took the responsibility for throwing two more interceptions after the loss to the Rams. But with 10 turnovers in the past four games by the QB alone, it’s clear something is off with Seattle’s leader.

The clearest example was in the first half Sunday when instead of running for a first down — and potentially even more — Wilson forced a pass into the corner of the end zone that was intercepted. It was his third interception thrown in or near the end zone in the four-game stretch.

“We made some mistakes in this game that just don’t look normal for us,” Seattle coach Pete Carroll said Monday. “And there’s the one play that jumps out is the interception when he could have taken off and run and he saw something down field and took shot at it. That’s an indication that he could have taken what’s in front of him. Russ and I both talked about how follow your instincts to the first opportunity. Let’s go take advantage of it and go to the next play.” 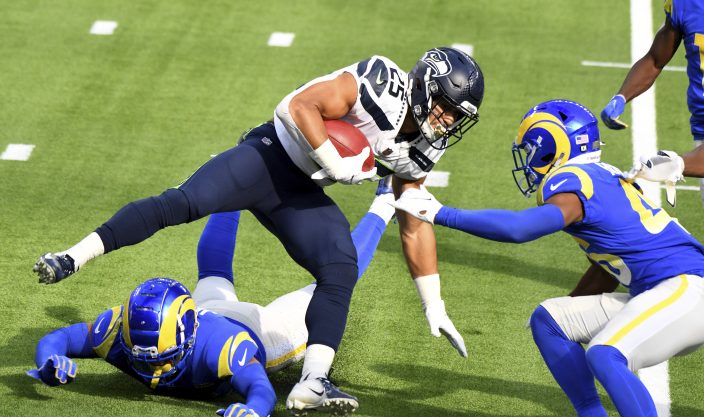 Seattle Seahawks running back Travis Homer (25) runs for a first down against the Los Angeles Rams in the first half of an NFL football game in Inglewood, Calif., Sunday, Nov. 15, 2020. (Keith BirminghamThe Orange County Register via AP)

Just a few weeks ago, Seattle was the last unbeaten team in the NFC and Wilson was leading the MVP conversation. But they’ve skidded as the scheduled has toughened and Wilson’s play has fallen. Over the past four games, Wilson has nine TDs, seven interceptions and a 90.6 passer rating.

It’s the fifth time under Carroll that Seattle has lost three of four games. But the Seahawks haven’t lost three straight in the same regular season since Weeks 7-9 of the 2011. That’s nine years of avoiding the kinds of losing skids that can derail promising seasons.

That will get tested against Arizona and whether the Seahawks will go into the final stretch of the regular season in control of the NFC West or in a fight for a playoff berth.

In a stretch where the Seahawks haven’t played well, defensive tackle Poona Ford deserves a nod. Ford had five tackles, two tackles for loss and a sack against the Rams. Known more as a run stuffer, Ford has improved as a pass rusher and been able to stay on the field more. Ford has 13 tackles, one sack and one fumble recovery in the past four games.

Seattle needs to get running backs Chris Carson (foot) and Carlos Hyde (hamstring) back from injuries to help balance the offense. Wilson ended up Seattle’s leading rusher with 60 yards against the Rams. Alex Collins had 43 yards on 11 carries. The Seahawks' offense was at its best early in the season with Wilson’s passing and the threat of the Carson/Hyde duo on the ground.

Carroll was hopeful Monday that Hyde would play against Arizona, while still uncertain on Carson’s status.

Jason Myers has quietly had a terrific season. Myers set a franchise record hitting a 61-yard field goal on the final play of the first half on Sunday. He also hit from 37 and 39 yards in the game, and has made 21 straight field goal attempts dating to last season. The previous franchise record was 58 yards, shared by Josh Brown and Steven Hauschka.

For the second time this season, DK Metcalf was mostly invisible against a premier cornerback. He had just two catches for 23 yards against Arizona and Patrick Peterson in Week 7. On Sunday, he was limited to two catches for 28 yards and was marked most of the game by Jalen Ramsey. Wilson was hesitant to throw at Ramsey and Metcalf didn’t have a target until the second half.

There are plenty of injury concerns for Seattle. Safety Jamal Adams played through a painful shoulder injury suffered in the first quarter and said he has every intention of playing Thursday against Arizona. Center Kyle Fuller suffered a high-ankle sprain, but remained in the game. Wide receiver Tyler Lockett has a slightly sprained knee, but Seattle is hopeful he’ll play. Center Kyle Fuller suffered an ankle sprain but finished the game. Fuller was replacing Ethan Pocic, who still has not cleared concussion protocol.

Seattle is also still waiting to see how CB Shaquill Griffin (hamstring) progresses through the week.

9 — Seattle is 9-1 in Thursday night games since Carroll’s arrival in 2010 and 2-0 in previous Thursday games vs. the Cardinals.

Potentially the biggest game of the season in the NFC West arrives Thursday night when Seattle hosts Arizona. A win by the Cardinals would give them a season sweep and tiebreaker in the division race. A victory by the Seahawks would give Seattle a one-game lead and could be crucial with what appears to be an easy four-game stretch upcoming.