While the Saints are riding a six-game winning streak and sitting atop the NFC South, their resourcefulness and resilience will be tested in upcoming weeks.

A 27-13 victory over San Francisco on Sunday was a costly one in terms of injuries that affected quarterback Drew Brees, left tackle Terron Armstead, cornerback Marshon Lattimore and others.

While coach Sean Payton declined to comment on any injuries until the first injury report of this week is due out Wednesday afternoon, a person familiar with the situation said Brees has multiple rib fractures and also was diagnosed with a collapsed lung. The person spoke to The Associated Press on condition of anonymity because the Saints have not released any specifics on Brees' diagnosis. 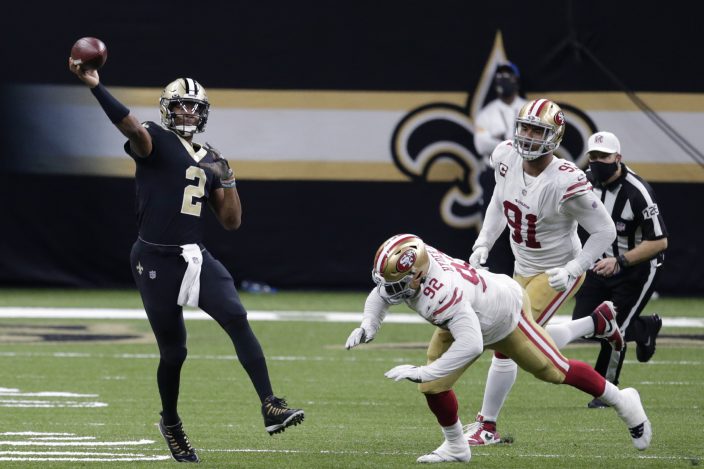 New Orleans Saints quarterback Jameis Winston (2) passes under pressure from San Francisco 49ers defensive end Kerry Hyder (92) and defensive end Arik Armstead (91) in the second half of an NFL football game in New Orleans, Sunday, Nov. 15, 2020. A day after he started and played 40 snaps against the Saints, the 49ers placed Armstead on the reserve-COVID-19 list. (AP PhotoButch Dill)

Brees is expected to miss several games while his lung and ribs heal, meaning the offense will now be primarily in the hands of Jameis Winston, who was selected first overall by Tampa Bay in the 2015 NFL draft.

During his five seasons with the Bucs, Winston was as mercurial as he was prolific. His statistics last season were a case in point. He passed for 5,109 yards and 33 touchdowns, but also threw 30 interceptions. His lack of consistency and penchant for risky throws led the Buccaneers to pursue former New England QB Tom Brady last offseason and let Winston go.

When Winston signed a one-year deal with New Orleans, he said he did so with a willingness to serve as a backup and refine his game while learning from Payton and Brees, who have formed one of the most prolific coach-quarterback tandems in NFL history. 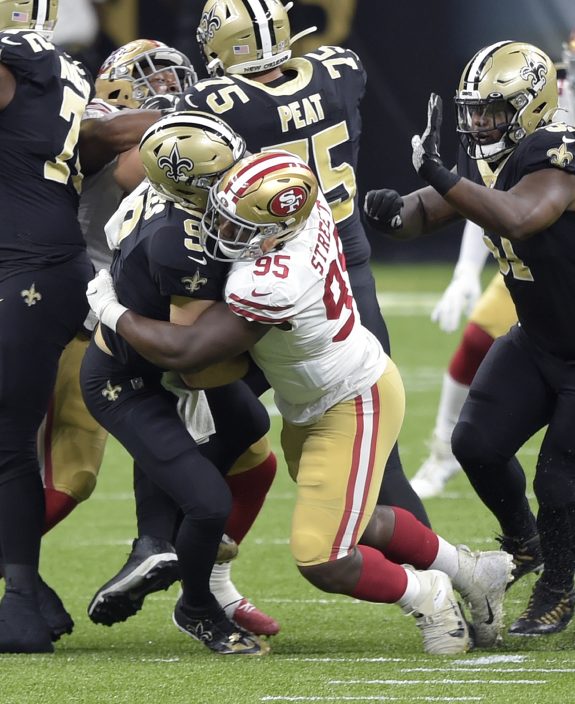 New Orleans Saints quarterback Drew Brees (9) is sacked by San Francisco 49ers' Kentavius Street (95) during the second quarter of an NFL football game in New Orleans, Sunday, Nov. 15, 2020. Brees has been diagnosed with multiple rib fractures and a collapsed right lung, a person with knowledge of the situation said Monday. The person spoke on condition of anonymity because the Saints have not announced specifics about Brees' injury, which the 41-year-old quarterback said occurred on a heavy hit by Street in the second quarter of New Orleans victory over the Niners on Sunday. (Max BechererThe Advocate via AP)

Now Winston is taking a team-first approach to how he talks about his goals when he's under center in place of the injured Brees.

“My main job’s to serve my teammates, and help put us in a position to win a football game," Winston said. "We all fight in this thing together.”

Winston was 6-of-10 passing for 63 yards and led two scoring drives that resulted in 10 insurance points in the second half of Sunday's victory. 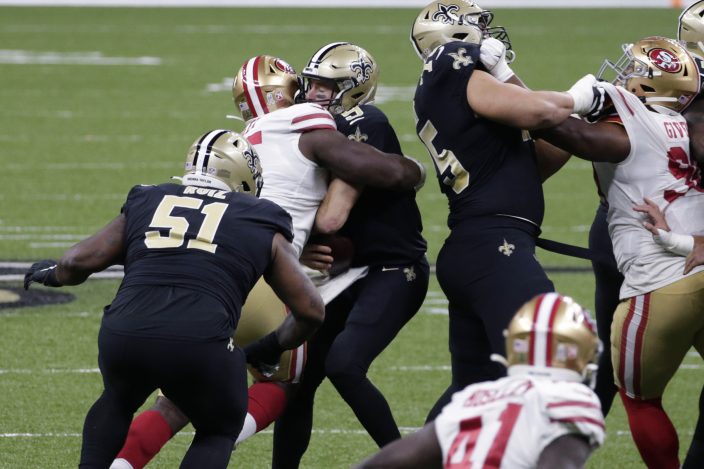 San Francisco 49ers defensive end Kentavius Street (95) sacks quarterback Drew Brees (9) in the first half of an NFL football game in New Orleans, Sunday, Nov. 15, 2020. Brees has been diagnosed with multiple rib fractures and a collapsed right lung, a person with knowledge of the situation said Monday, from the heavy hit on the play. (AP PhotoButch Dill)

Brees, who watched from the sideline, said after Sunday's game that he though Winston “did great.”

When Brees missed five games last season after having hand surgery, the Saints won five straight with Teddy Bridgewater as starter. So there is precedent for New Orleans' ability to keep winning without their record-setting starting QB.

Meanwhile, the Saints' depth also could be tested at defensive back, offensive line and tight end because of Sunday's injuries.

But they don't sound concerned — at least, not yet

“This is the NFL, people get hurt all the time,” Saints right tackle Ryan Ramczyk said. “And it is something you have to play through.”

The Saints run defense ranks second in the NFL, allowing 76.8 yards per game for the season after yielding just 49 yards rushing against the Niners.

The passing game. Winston may need to develop timing and chemistry with receivers in short order to keep New Orleans' winning streak going. The Saints had a total of 123 yards passing in their victory over the 49ers, with Brees accounting for more than half of that before he got hurt. The Saints' victory was their first with fewer than 125 yards passing since the 2006 season.

Safety Malcolm Jenkins has an interception in each of his past two games.

Rookie right guard Cesar Ruiz, drafted in the first round out of Michigan last spring, was blocking Street on the play in which Street won his matchup and got his clean and injurious shot on Brees.

Brees was only one of a number of Saints injured Sunday. Receiver Tre’Quan Smith and tight end Josh Hill both left Sunday's game with concussion symptoms. Armstead appeared to injure his right ankle. Defensive tackle Malcom Brown injured his calf. Lattimore had an oblique injury.

Four — The number of consecutive seasons in which the Saints have had six-game winning streaks. It's the first time in the history of the club, which was founded in 1967, that it has had winning streaks that long that many years in a row. The Saints had previously won six straight in each season from 2009 to 2011 — also during the Payton-Brees era that began in 2006.

The Saints host the Falcons on Sunday before two straight road games at Denver and Atlanta.