A group of women who say they were victimized by Harvey Weinstein, including one who testified at his trial, have endorsed former prosecutor Lucy Lang to replace the Manhattan district attorney who put the movie mogul behind bars.

“It’s a privilege to stand beside them in calling for a system that better integrates their experiences and needs into a plan for the future," she said.

Manhattan District Attorney Cyrus R. Vance Jr., who oversaw Weinstein's prosecution, has not said whether he’ll seek a fourth term. The primary election is in June, but he hasn't been raising money for a campaign, leading to speculation he will leave office when his term expires.

Vance's ultimately successful handling of the Weinstein case hasn't silenced criticism for his past reluctance to prosecute similar accusations against affluent and prominent men. 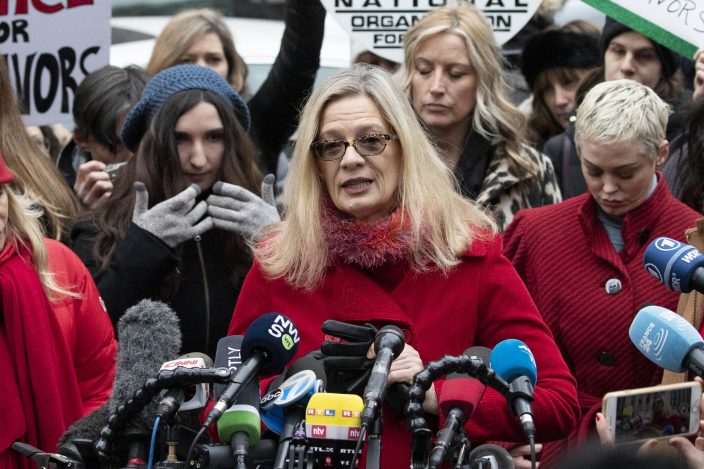 Actor Louise Godbold, center, speaks at a news conference outside a Manhattan courthouse after Harvey Weinstein arrived, Monday, Jan. 6, 2020, in New York. A group of women, including Godbold, who said they were victimized by Weinstein, endorsed former prosecutor Lucy Lang on Tuesday, Nov. 17 to replace the Manhattan district attorney who put the movie mogul behind bars. (AP PhotoMark Lennihan)

His office initially declined to prosecute Weinstein after a model accused him of groping her in 2015, citing a lack of proof. Weinstein was s entenced to 23 years in prison earlier this year after he was convicted of rape and sexual abuse.

Vance also declined to prosecute former International Monetary Fund chief Dominique Strauss-Kahn after a hotel maid accused him of attempted rape. Vance's office was also criticized for not initially advocating for Jeffrey Epstein to be classified as a top-level sex offender.

Lang is among a host of candidates who have announced they are running for Manhattan district attorney.

Lang was an assistant district attorney in Manhattan for 12 years before leaving in 2018 to become director of the Institute for Innovation in Prosecution at John Jay College.

As part of a plan to prioritize getting justice for sex crimes victims, Lang said she wants “consent” to be defined for the first time in New York State penal law and better training of prosecutors so they understand victim trauma.

Godbold said in an interview that she was impressed by Lang at a roundtable last year where Lang understood the importance of not letting survivors feel powerless.

The Associated Press does not generally name sexual assault victims unless they consent to telling their stories publicly, as all of the women who endorsed Lang have done.

Weinstein accuser who testified at his trial sues him