For the better part of the last decade, a tradition unlike any other for Rickie Fowler was getting that envelope around the holidays inviting him to the Masters.

Fowler tied for 29th in the Masters and dropped two spots in the world ranking to No. 48. He has finished every year in the top 50 since 2009, the year he turned pro, and he has not been outside the top 50 at any time since he reached the semifinals of the Match Play Championship in February 2014.

Webb Simpson discusses his shot that went into the water on the 11th hole with his caddie Paul Tesori during the second round of the Masters golf tournament Friday, Nov. 13, 2020, in Augusta, Ga. (AP PhotoDavid J. Phillip)

Only one PGA Tour event remains after this week, the Mayakoba Classic on Dec. 3-6. This is no time to panic, but it is time to start contemplating the invitation list for next year's Masters, which is only five months away.

Fowler has company. Ian Poulter is at No. 47, one spot behind Lee Westwood. Both are playing the RSM Classic this week.

On the other side of the magic number is Kevin Streelman at No. 51, who also is playing the RSM Classic. Streelman already missed one bubble. He started the FedEx Cup playoffs at No. 22 and missed out on the top 30 by nine points — anyone making the Tour Championship is in the Masters. He shot 80 in the second round of the BMW Championship and a gritty 66-69 weekend left him two shots short. 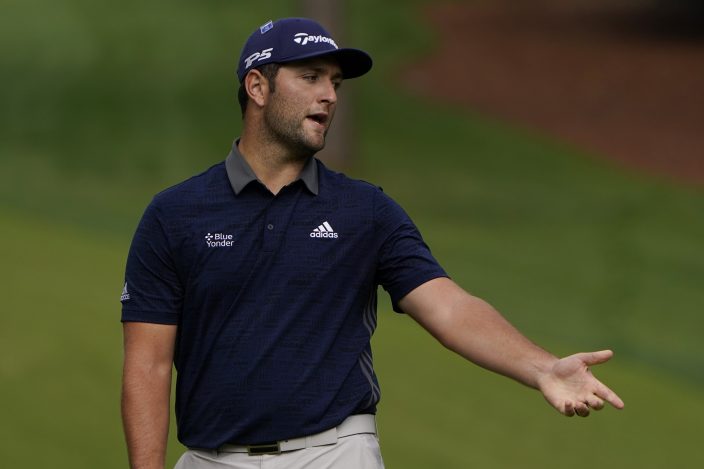 Jon Rahm, of Spain, reacts to his missed putt on the 10th green during the final round of the Masters golf tournament Sunday, Nov. 15, 2020, in Augusta, Ga. (AP PhotoChris Carlson)

Winning a PGA Tour event that offers full FedEx Cup points also is a ticket to Augusta National, along with being in the top 50 a week before the Masters is played. Most players would prefer to avoid that, which is why Brandt Snedeker added the Indonesia Masters three years ago. He withdrew after one round and wound up missing the 2018 Masters.

There already are 73 players in the field for next April, and with only a month of tournaments around the world, six others from the top 50 appear to be safe. That list includes Matt Kuchar at No. 32 and Justin Rose at No. 28. Both left Augusta National without being on the list just yet.

Sea Island and Mayakoba are all that remain on the PGA Tour. Europe is starting a South African swing of three events and still has the DP World Tour Championship in Dubai. 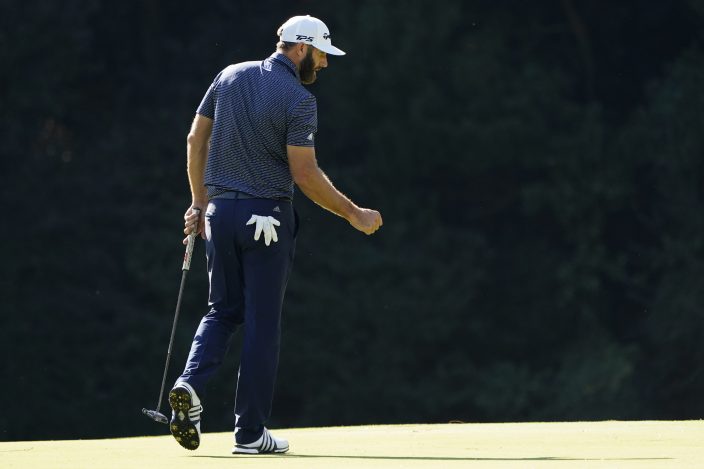 Dustin Johnson pumps his fist after a birdie on the 15th green during the final round of the Masters golf tournament Sunday, Nov. 15, 2020, in Augusta, Ga. (AP PhotoMatt Slocum)

C.T. Pan and Corey Conners took care of next year on Sunday. Pan birdied three of his last four holes to match the low score of the final round at 68 and finished in a tie for seventh. Conners birdied the 16th and 17th holes for a 69 to tie for 10th. The top 12 are invited back.

The LPGA Tour has gone through this before. The Ryder Cup changes years, and the Solheim Cup has little choice but to follow suit. It happened in 2001 after the Sept. 11 terrorist attacks, leading the Ryder Cup to move to the last week of September in 2002, one week after the Solheim Cup was planned for Interlachen.

The Ryder Cup switched to even-numbered years, and the Solheim Cup was played in 2003 in Sweden.

At least this time the Solheim Cup isn’t changing as quickly.

“With the world sporting schedule changing so much due to current difficulties, we felt it was in the best interest of the Solheim Cup to return to an off-year rotation with the Ryder Cup,” said Dennis Baggett, executive director of the Solheim Cup.

No one had a better year in the majors than Dustin Johnson, who won the Masters, tied for second in the PGA Championship and tied for sixth in the U.S. Open.

He also was one of 21 players to make the cut in all three majors this year.

The flip side is Tyrrell Hatton. He made the cut in every major in 2018 and 2019. This year, he was among six players who didn't make a cut in any of the three majors. The others were Matt Kuchar, Henrik Stenson, Graeme McDowell, Andrew Putnam and Max Homa.

The U.S. Women's Open field was set this week by using the world ranking to fill out the 156 players who will be at Champions Golf Club in Houston on Dec. 10-13.

The field in December is bigger than the men's field in September because it will have two courses for the opening two rounds — Jackrabbit and Cypress Creek, the latter hosting the final two rounds.

Among the 28 players who qualified from the world ranking are Women's British Open champion Sophia Popov and former Women's Open champion Cristie Kerr, who won her title in 2007 at Pine Needles. This will be Kerr's 22nd consecutive start in the U.S. Women's Open.

Just like the U.S. Open, the pandemic prevented open qualifying and forced the USGA to create an all-exempt field. Previously added among amateurs was U.S. Women's Amateur champion Rose Zhang, the No. 1 amateur in the world.

Tiger Woods had a one-shot victory in the 2019 Masters. The next six majors that followed, three of them this year, have been won by two shots or more.

Two of them this year had no suspense. Bryson DeChambeau won the U.S. Open at Winged Foot by six shots, while Dustin Johnson won the Masters by five.

That marked the first time since 1997 that two players won majors by five shots or more in the same year. Woods won the Masters by a record 12 shots that year, while Davis Love III pulled away late to win the PGA Championship at Winged Foot by five shots.

The only other time two majors were blowouts was in 2000 by the same guy — Woods won by 15 shots in the U.S. Open at Pebble Beach, and by eight shots in the British Open at St. Andrews.

Jin Young Ko, the No. 1 player in women's golf, returns to the LPGA Tour this week in Florida for the first time since the final event last year. She has been home in South Korea during the pandemic. ... Dustin Johnson joined Angel Cabrera, Jack Nicklaus and Ben Hogan as the only players to win majors at Augusta National and Oakmont. ... The Korn Ferry Tour announced a 2021 schedule that no longer features two events in the Bahamas in January. Instead, the year will start with the Lecom Suncoast Classic in Florida on Feb. 18-21. Because of the pandemic, 2021 is a continuation of the season.

Dustin Johnson was the first player at No. 1 in the world to win the Masters since Tiger Woods in 2002. He was the first No. 1 player to win any major since Rory McIlroy at Valhalla in 2014 at the PGA Championship.

“It’s like you almost have to hit the delete button from what you learned this week because ... all those shots will never, ever play like that again.” Jon Rahm on the Masters in November.