A look at what’s happening around European soccer on Wednesday:

BOSNIA AND HERZEGOVINA vs. ITALY

Italy controls its own destiny in Sarajevo, where a victory will assure that the Azzurri not only win their Nations League group and advance to the Final Four but also host the tournament in October. Italy coach Roberto Mancini and standout forward Ciro Immobile are still out with the coronavirus, with several more players unavailable due to club quarantines. But Italy has already beaten Estonia and Poland with understrength squads over the past week. Reaching the finals would come almost exactly three years after the Azzurri embarrassingly failed to qualify for the 2018 World Cup. Bosnia has already been mathematically relegated to League B. Italy can also advance with a draw if the Netherlands doesn’t beat Poland in the other Group 1 game, or even with a loss if the other game is drawn. 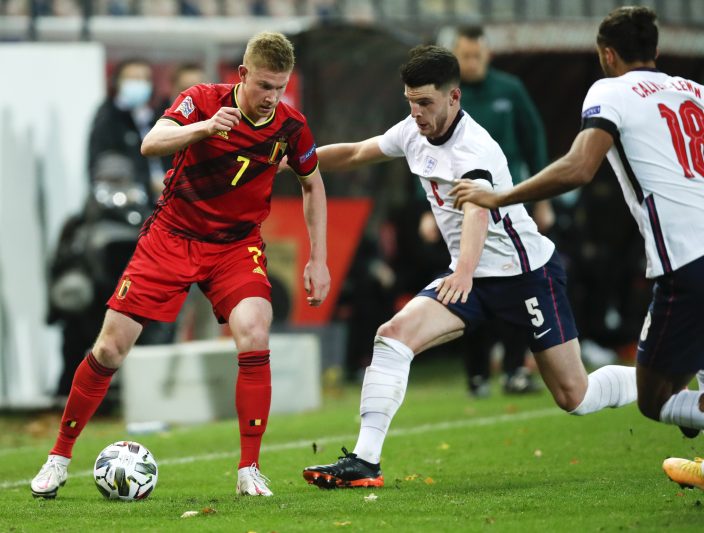 A draw will be enough for Belgium to reach the Final Four, but a defeat at the hands of Christian Eriksen's teammates would send FIFA's top-ranked team crashing out and Denmark would win the group. Two years ago, Belgium was in a similar position and slumped to a 5-2 shock loss to Switzerland. Determined to avoid another setback, Belgium coach Roberto Martinez can count on a formidable attacking power. Perhaps more crucially, Belgium has also shown resilience and relentless defensive work in its 2-0 win against England last week. In addition to Eden Hazard, who remained in Spain with Real Madrid after testing positive for COVID-19, Belgium will be missing two other important players through suspension — Axel Witsel and Thomas Meunier.

Neither team is able to finish first in the group to qualify for next October's Nations League Final Four, so they could use the match to give a run-out to fringe players. England coach Gareth Southgate, for example, is definitely without Jordan Henderson and Raheem Sterling because of minor injuries and could choose to rest other first-choice players who have a busy schedule of domestic games coming up. Aston Villa midfielder Jack Grealish will hope to get a third straight start for England in this international break to cement his place in the team and continue his brilliant season on a personal level. Iceland, which is last in the group and without a point from five games, was handed a exemption from the British government to play at Wembley Stadium. Its players would ordinarily have been subject to a travel ban — prohibiting their entry to Britain — having played away on Sunday to Denmark, where a new coronavirus strain has spread from mink to humans.