South Korea has recorded its largest daily increase in coronavirus infections in nearly three months as it gets set to tighten social distancing rules in the greater Seoul area.

The Korea Disease Control and Prevention Agency reported 313 new cases on Wednesday, raising the country’s total to 29,311, including 496 deaths. 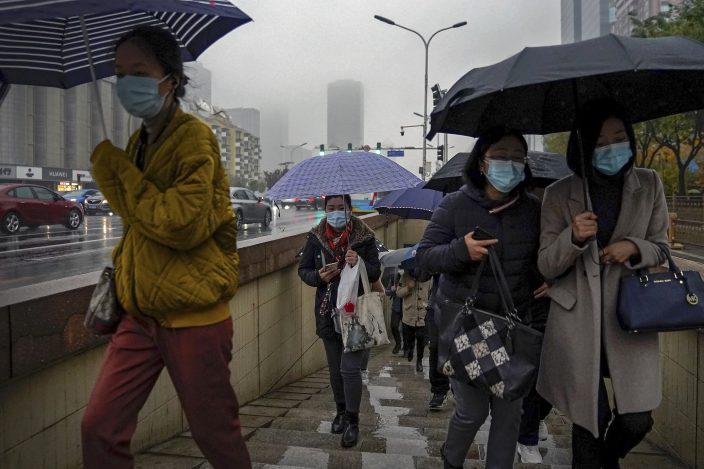 People wearing face masks to help curb the spread of the coronavirus hold umbrellas as they walk out of an underpass tunnel on a rainy morning rush hour in Beijing, Wednesday, Nov. 18, 2020. (AP PhotoAndy Wong)

South Korea is struggling to contain a spike in new infections since it eased its stringent social distancing rules last month. The new cases are tied to hospitals, nursing homes, churches, schools, offices and family gatherings.

Local health authorities said Tuesday that they would tighten distancing restrictions in the densely populated Seoul area and some parts of eastern Gangwon province. Those areas are at the center of the recent spikes.

Under the new rules, which come into effect Thursday for two weeks in those areas, gatherings of more than 100 people during rallies, festivals and concerts will be prohibited. They will also require people to sit at least one seat apart from each other in theaters, concert halls and libraries while limiting audiences at sporting events to 30% of the stadium’s capacity.

— The Australian state that includes the city of Adelaide will go into a six-day lockdown starting at midnight Wednesday, with schools, universities, bars and cafes closed. Only one person from each household in South Australia will be allowed to leave home each day, and only for specific reasons. Officials announced the move on Wednesday after a cluster of new cases grew to 22. State Premier Steven Marshall says he believes the lockdown will act as a “circuit-breaker” and reduce the risk of the outbreak spreading further. Health authorities say they believe a worker at an Adelaide hotel where people arriving from abroad are being quarantined caught the virus and then infected other family members. The restrictions also require most factories to close, aged-care facilities to go into lockdown, and weddings and funerals to be put on hold. Outdoor exercise will be banned, and wearing masks will be mandatory.