TOKYO — Authorities in Tokyo have announced nearly 500 new cases of the coronavirus, the biggest daily increase in the Japanese capital since the pandemic began, amid a nationwide spike in infections and as the country discusses with Olympic officials how to safely host next summer’s games.

The Tokyo metropolitan government reported 493 new cases on Wednesday, surpassing the city’s previous high of 472 recorded on Aug. 1, during the peak of Japan’s earlier wave of infections.

The record number of new cases came as International Olympic Committee President Thomas Bach ended his visit to Japan to discuss with Japanese Olympic officials how to safely host the games, which were postponed until next July due to the pandemic. 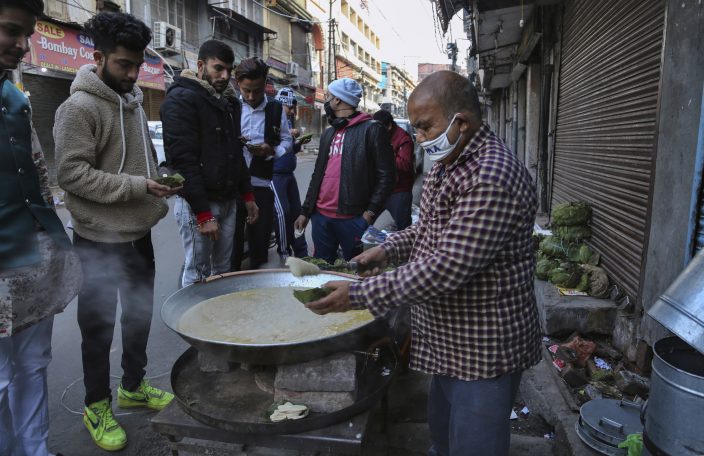 An Indian street vendor wearing face mask as a precaution against the coronavirus sells wheat and butter pudding in the morning in Jammu, India, Wednesday, Nov.18, 2020. (AP PhotoChanni Anand)

Japan has seen a steady climb in new cases nationwide in recent weeks, and experts have urged officials to step up preventive measures.

Japan has confirmed 120,815 cases overall, including 1,913 deaths, according to the health ministry. 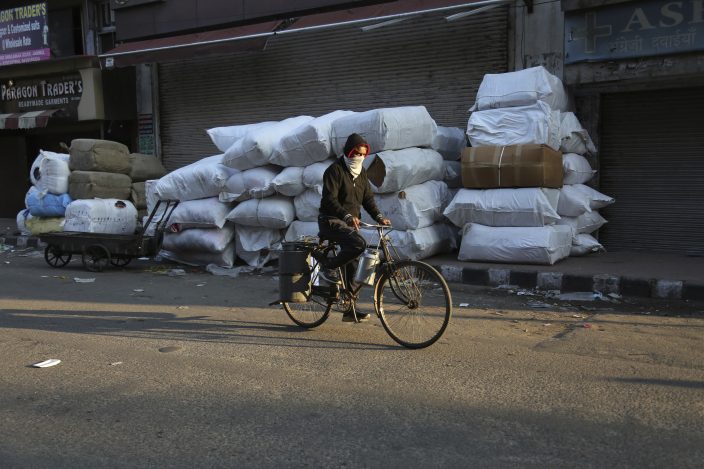 — Iowa Sen. Chuck Grassley, 87, says he has tested positive for the coronavirus

— Toilet paper limits, empty shelves are back as virus surges

SYDNEY — The Australian state of South Australia will begin a six-day lockdown at midnight Wednesday, with schools, universities, bars and cafes closed.

Only one person from each household will be allowed to leave home each day, and only for specific reasons. The restrictions also require most factories to close, aged-care facilities to go into lockdown, and weddings and funerals to be put on hold. Outdoor exercise is banned, and wearing masks is mandatory.

Officials announced the severe move Wednesday after a cluster of new coronavirus cases grew to 22. Premier Steven Marshall says he believes the lockdown will act as a “circuit-breaker” and reduce the risk of the outbreak spreading further.

SEOUL, South Korea — South Korea has recorded its largest daily rise in coronavirus infections in about 80 days as officials are preparing to tighten social distancing rules in the greater Seoul area.

Officials on Wednesday reported 313 new virus cases over the previous 24-hour period — the first time for the daily caseload to exceed 300 since late August.

Under rules taking effect Thursday for two weeks, no more than 100 people can attend rallies, festivals and concerts. People will have to sit at least one seat apart at theaters, concert halls and libraries, while sporting events are limited to 30% of a stadium’s capacity.

LOS ANGELES — Los Angeles County has imposed new restrictions on businesses and is readying plans for a mandatory curfew for all but essential workers if coronavirus cases keep spiking.

The county of 10 million people has seen daily confirmed cases more than double in the last two weeks to nearly 2,900.

On Tuesday, officials ordered non-essential retail businesses to limit indoor capacity to 25% and restaurants to 50% capacity outdoors. All such businesses must close by 10 p.m. The changes take effect Friday.

If daily cases rise to 4,500 and hospitalizations top 2,000, the county will impose a three-week lockdown that will restrict people to their homes for all but essential trips. A nighttime curfew would run from 10 p.m. to 6 a.m.

WASHINGTON — The White House coronavirus task force is warning of “aggressive” and “unrelenting” spread of the coronavirus as the nation heads into the Thanksgiving holiday.

A senior administration official said Tuesday that scientists and public health experts sounded alarm about the spread of the virus, which is on the upswing across the entire nation.

In its weekly report, the task force says there is “aggressive, unrelenting, expanding broad community spread across the country, reaching most counties, without evidence of improvement but rather, further deterioration.”

It says existing efforts to slow the spread “are inadequate and must be increased to flatten the curve.” The panel also says Thanksgiving travel and gatherings could “amplify transmission considerably.”

The guidance is a departure from the public comments of President Donald Trump and Vice President Mike Pence, who have emphasized progress in vaccine development. But experts warn that tens of thousands of Americans will die before there is widespread distribution of a vaccine.

CHICAGO — Public schools in Chicago will resume in-person learning beginning in January, with officials saying remote learning instituted in March due to the coronavirus pandemic has not well-served many students.

Officials said Tuesday that pre-kindergarten and students enrolled in intensive and moderate cluster classrooms will begin in-person learning Jan. 11. Kindergarten through 8th grade students will return to classrooms Feb. 1. A return date for high school students is still under consideration.

The school district will allow parents to decide whether they want their children to return to school. Chicago Mayor Lori Lightfoot says in a statement that many students did well with remote learning but the youngest children, Black and Hispanic students, and highest-need learners haven’t been served.

NEW ORLEANS — The raucous Mardi Gras parades where riders on elaborate floats toss trinkets to adoring throngs have been canceled in New Orleans because the close-packed crowds could spread the coronavirus.

At least for the 2021 season, the pandemic has put an end to the New Orleans Mardi Gras as it has long been celebrated. City spokesman Beau Tidwell said Tuesday that no parades will roll during the weeks leading up to and including Fat Tuesday because they can’t meet restrictions meant to slow the spread of the novel coronavirus that causes COVID-19.

The cancellation is based largely on a 250-person cap on outdoor crowds. Tidwell says: “You can’t have traditional parades with that small a group.”