The British government spent billions without proper transparency in a scramble to secure protective equipment early in the coronavirus outbreak, the country’s public watchdog said Wednesday.

The National Audit Office said in a report that companies with links to politicians were fast-tracked and had more chances of getting a coronavirus contract than other applicants.

Like many countries, the U.K. was caught without enough masks, gowns, gloves and other items to keep health care workers and the public safe as coronavirus cases skyrocketed. 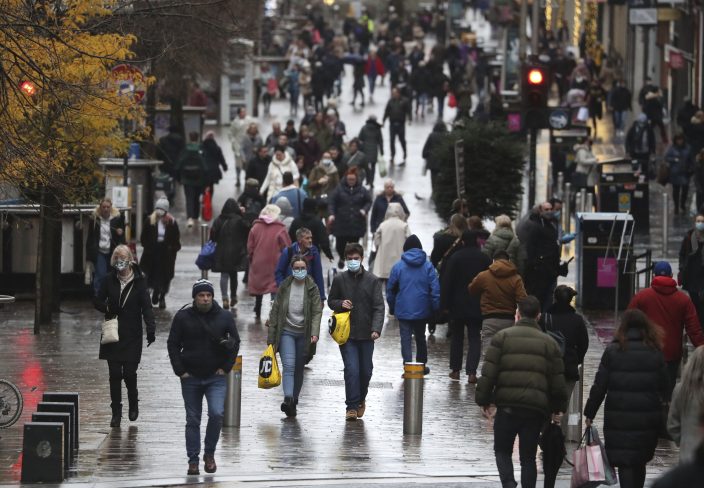 People walk along Buchanan Street in Glasgow, Scotland, Tuesday Nov. 17, 2020. 11 local authorities in Scotland, including Glasgow, are to be placed into its highest tier of coronavirus restrictions this week. The restrictions, which are similar to the lockdown in England, are set to run from Friday until Dec. 11. (Andrew MilliganPA via AP)

In the push to build up stocks, the government awarded 8,600 contracts worth 18 billion pounds ($24 billion) between March and July, most without a competitive tender process. Some came from a “high-priority lane” of firms referred by politicians, health professionals and government officials, which were considered more credible and processed more quickly than others.

The auditor said in a sample of cases it studied, “departments failed to document key decisions, such as why they chose a particular supplier or used emergency procurement, and failed to document their consideration of risks, including how they had identified and managed any potential conflicts of interest.”

It said in some cases documents to support decisions were missing, or contracts were awarded after the work had already been done. In more than half the cases, contracts had not been published by Nov. 10.

Opposition Labour Party lawmaker Meg Hillier, who heads Parliament’s Public Accounts Committee, said the government had “ripped up the rules and ridden roughshod over the taxpayer.”

Business Secretary Alok Sharma defended the government, saying it had acted with urgency and under “huge pressure.”

“We had to do an enormous amount of work very fast to secure PPE and that’s what we did, and I’m not going to apologize for the fact that quite rightly we made that effort,” he told the BBC.