CYBERSECURITY CHIEF FIRED: President Donald Trump has fired the nation’s top election security official, a widely respected member of the administration who had dared to refute the Republican president’s unsubstantiated claims of electoral fraud. The dismissal of the director of the Cybersecurity and Infrastructure Security Agency, Christopher Krebs, was abrupt but not a surprise. Krebs had been issuing a stream of statements and tweets over the past week attesting to the proper conduct of the election. 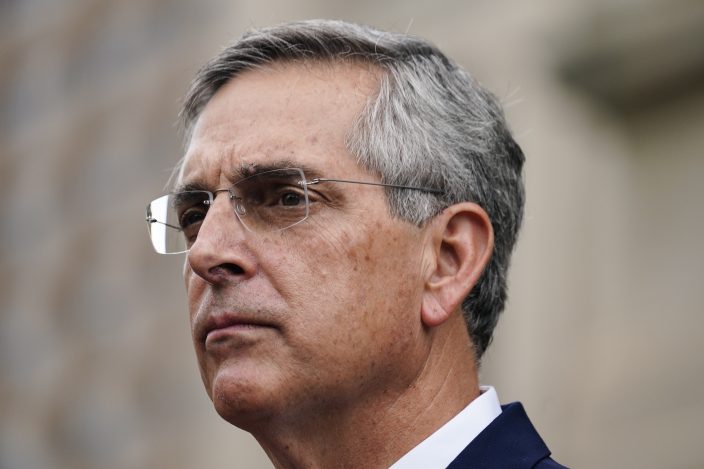 FILE - In this Wednesday, Nov. 11, 2020, file photo, Georgia Secretary of State Brad Raffensperger speaks during a news conference in Atlanta. Raffensperger is under attack from President Donald Trump and other fellow Republicans in the aftermath of the heated election season. (AP PhotoBrynn Anderson, File)

MICHIGAN REVERSAL: In an abrupt about-face, Michigan’s largest county unanimously certified election results showing Democrat Joe Biden defeating Trump, hours after Republicans first blocked formal approval of voters’ intentions. The initial move was quickly condemned by Democrats, election experts and spectators at the Wayne County Board of Canvassers online meeting as a dangerous attempt to block the results of a free and fair election. The state vote certification process is usually a routine task, and the ultimate resolution in Wayne County, which includes Detroit, propels Biden toward formal victory in Michigan.

PELOSI'S GAVEL: House Democrats seem certain to nominate Nancy Pelosi for two more years as speaker. And she’s on track to be formally elected by the full House in January. But she’ll lead a smaller majority that’s divided along ideological lines as it tries shepherding Biden’s agenda toward enactment. The California Democrat is facing no announced rivals when Democrats vote. No. 2 House Democratic leader Steny Hoyer and No. 3 party leader Jim Clyburn are also on track to retain their positions.

BIDING TIME: Biden has been forced to seek extraordinary workarounds to prepare for the exploding public health threat and evolving national security challenges he will inherit in just nine weeks. Blocked from the official intelligence briefing traditionally afforded to incoming presidents, Biden gathered virtually with a collection of intelligence, defense and diplomatic experts. He’s also expected to hold his own meetings with vaccine makers this week to help determine his own distribution plan.

GEORGIA RECOUNT: Election officials across Georgia are staring down a deadline to complete a hand tally of the presidential race in the state. The hand recount of nearly 5 million votes stemmed from an audit required by a new state law and wasn’t in response to any suspected problems with the state’s results or an official recount request. The law requires the audit to be done before the counties’ certified results can be certified by the state.

QUOTABLE: “We depend on democratic norms, including that the losers graciously accept defeat. That seems to be breaking down.” — Joshua Douglas, a law professor at the University of Kentucky, after Republicans first blocked formal approval of election results in Wayne County, Michigan.

A rusty Giuliani returns to the courtroom on Trump’s behalf