Europe made up almost half of the world’s 4 million new coronavirus cases last week but recorded a nearly 10% fall in infections compared to the week before, thanks in part to strict government lockdown measures that have fanned some discontent, the World Health Organization reported Wednesday.

In the German capital of Berlin, violent clashes between those protesting coronavirus restrictions and police erupted Wednesday near the center of the city after protesters disregarded police advice to wear masks and social distance.

The latest weekly tally from the U.N. health agency comes found that its 54-nation European region continued to report most new cases worldwide — 46% — but the decline in cases followed “the strengthening of public health and social measures” in the region. But as new cases fell, though, the tally of deaths rose “substantially” in Europe over the last week to more than 29,000 reported virus deaths. WHO said. 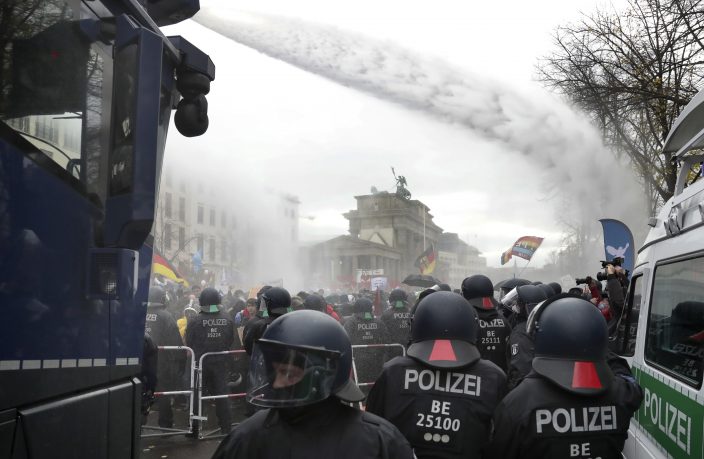 Police uses water canons to clear a blocked a road between the Brandenburg Gate and the Reichstag building, home of the German federal parliament, as people attend a protest rally in front of the Brandenburg Gate in Berlin, Germany, Wednesday, Nov. 18, 2020 against the coronavirus restrictions in Germany. Police in Berlin have requested thousands of reinforcements from other parts of Germany to cope with planned protests by people opposed to coronavirus restrictions. (AP PhotoMichael Sohn)

WHO's Americas region saw a 41% increase in new cases, suggesting that a higher weekly death toll could soon follow there. Southeast Asia was the only region that saw a drop in cases and deaths.

In Europe, WHO said the sharpest rise in coronavirus cases was in Austria, which saw a 30% increase in new cases compared to the previous week. WHO also noted the U.K. was the first country in the region to record more than 50,000 deaths.

Pockets of Western Europe have shown signs of turning a corner, particularly in the lowlands near the English Channel. 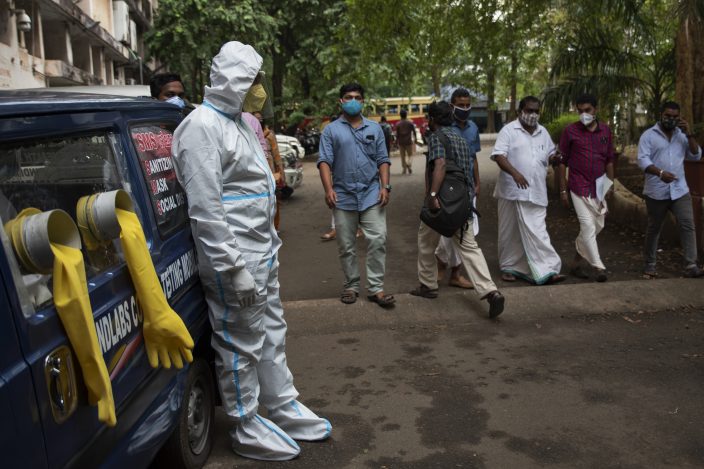 A man in protective suit stands next to a mobile COVID-19 testing kiosk outside the Ernakulam district administration headquarters in Kochi, Kerala state, India, Wednesday, Nov. 18, 2020. A country of nearly 1.4 billion people, India is the world's second most coronavirus affected country after the United States. (AP PhotoR S Iyer)

Belgium said Wednesday it had taken a major step in containing the resurgence of the coronavirus, reporting a drop in the daily death count for the first time since the latest COVID-19 wave hit the continent this autumn.

Virologist Steven Van Gucht, from the government's Sciensano health group, said the daily average of deaths in the country now stood at 185 people, a 5% decrease compared to the average a week ago. Over the last week, the daily average of hospital admissions dropped 24% and new infections fell 39%.

Officials in the Netherlands, to the north, were easing coronavirus restrictions amid falling infection rates, and were poised to reopen public venues like cinemas, museums, libraries, zoos and swimming pools — still with limitations on how many people can visit — after a two-week closure. 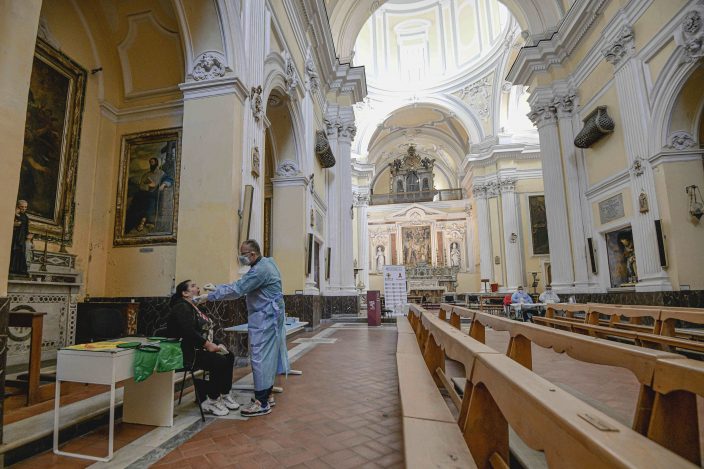 A medical operator performs COVID-19 test swabs in the Church of San Severo Outside the Walls, in the heart of Naples, Italy, Wednesday, Nov. 18, 2020. An initiative of "Sanita' Diritti Salute" association and the San Gennaro Foundation, aimed at helping those who cannot afford the cost of a private test, also allows, in the best tradition of Naples, those who want to pay 18 euros for a "suspended swab", to be taken by somebody else, exactly as it happens for the famous Neapolitan "suspended coffee". (Alessandro Pone LaPresse via AP)

Dutch Prime Minister Mark Rutte hailed a “positive” downward trend but said cases counts were still too high. He warned the country to remain on a partial lockdown. In mid-October, Dutch rates of infections were among the worst in Europe.

Meanwhile, some people in Germany were growing increasingly restive about increasing lockdown measures.

In Berlin, police fired water cannons Wednesday at demonstrators and carried away some who were protesting coronavirus restrictions near the famed Brandenburg Gate and the seat of the federal government. The melee erupted after crowds ignored calls to wear masks and keep their distance from one another in line with pandemic rules. 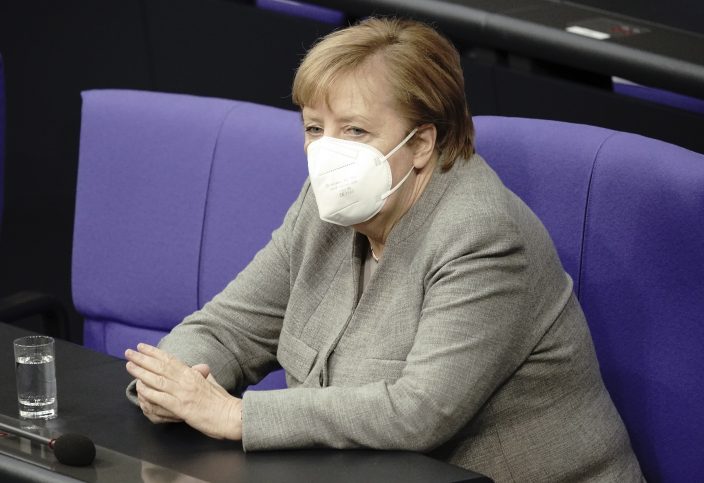 German Chancellor Angela Merkel attends a meeting of the German federal parliament, Bundestag, at the Reichstag building in Berlin, Germany, Wednesday, Nov. 8, 2020. German lawmakers attend a debate on a bill that will provide the legal underpinning for the government to issue social distancing rules, require masks in public and close stores and other venues to slow the spread of the virus. (Michael Kappelerdpa via AP)

It came as German lawmakers were debating a bill that could provide the legal groundwork for the government to issue social distancing rules, require masks in public and close stores and other venues to slow the spread of the virus. Most people in Germany support such rules, but a vocal minority has staged regular rallies arguing that the restrictions violate the constitution.

“We want our lives back,” read one sign carried by protesters in Berlin.

Germany was praised for its handling of the first wave of the virus, but like many parts of Europe has seen a sharp uptick in new infections in recent weeks. Overall the country has seen 833,000 coronavirus cases and more than 13,000 virus-confirmed deaths, a death toll one-fourth that of Britain’s. 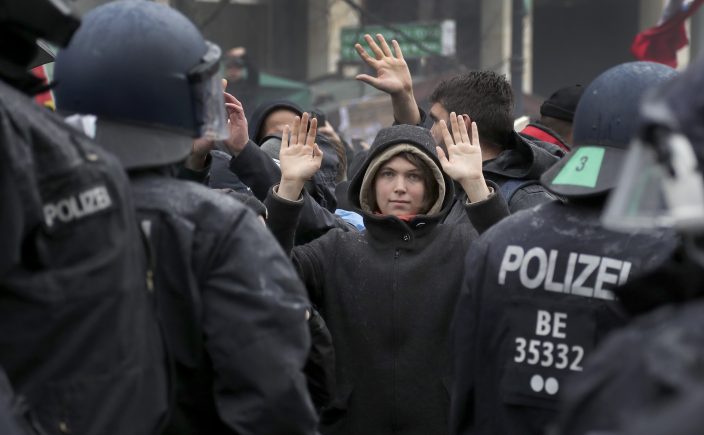 A protestor lifts her hands as police officers block a road between the Brandenburg Gate and the Reichstag building, home of the German federal parliament, as people attend a protest rally in front of the Brandenburg Gate in Berlin, Germany, Wednesday, Nov. 18, 2020 against the coronavirus restrictions in Germany. Police in Berlin have requested thousands of reinforcements from other parts of Germany to cope with planned protests by people opposed to coronavirus restrictions. (AP PhotoMichael Sohn)

Maria Cheng in London, Raf Casert in Brussels, David Rising in Berlin, and Mike Corder in The Hague, Netherlands, contributed to this report.