BEIJING — Chinese President Xi Jinping is calling for closer international cooperation on making a vaccine for the coronavirus available.

Xi spoke Thursday in an address delivered via video at an event at the Asia-Pacific Economic Cooperation forum.

Xi said: “To beat the virus and promote the global recovery, the international community must close ranks and jointly respond to the crisis and meet the tests.” 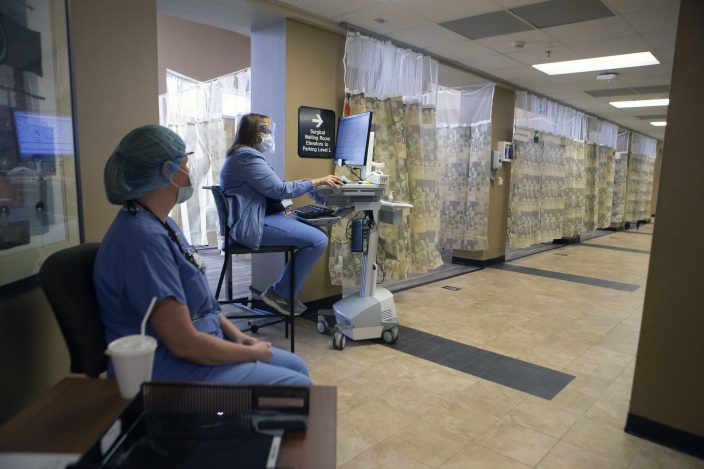 Nurses at Stormont Vail Health System position themselves in a hallway that was made into hospital room Wednesday, Nov. 18, 2020 in Topeka, Kan. Conditions inside the nation’s hospitals are deteriorating by the day as the coronavirus rages through the country at an unrelenting pace. Stormont Vail Health in Topeka, Kansas, devoted an entire hospital floor to COVID-19 patients as their numbers swelled, hitting 90 on Wednesday. (Evert NelsonThe Topeka Capital-Journal via AP)

He said cooperation would include closer coordination on policies for development and distribution of a vaccine.

Chinese companies Sinovac and Sinopharm are in the late stages of testing vaccines, putting them among nearly a dozen companies at or near that level of development. That has introduced both commercial and political competition among countries and companies to be the first to offer a solution to the pandemic.

— California struggles with how to enforce coronavirus orders

NEW DELHI — India has recorded 45,576 new cases in the past 24 hours as authorities battle to slow down a surge of infections in its capital by increasing testing.

New Delhi reported 7,486 new positive cases on Thursday with a record 131 deaths in the past 24 hours.

New Delhi's top elected official, Arvind Kejriwal, says the government is adding 1,400 new intensive care unit beds to prevent hospitals from being overwhelmed. He has ruled out a new lockdown in New Delhi.

India has seen it new daily cases decline to fewer than 50,000 for the past 12 days.

The 343 new cases announced Thursday raised the country’s case total to 29,654 for the pandemic, with 498 deaths from COVID-19.

On Thursday, elevated physical distancing rules took effective in the greater Seoul area, the southern city of Gwangju and some parts of Gangwon province. In those areas, no more than 100 people may attend rallies, concerts and other events, while sporting events and religious services are limited to 30-50% capacity. Dancing at nightclubs and drinking at karaoke rooms are prohibited.

WELLINGTON, New Zealand — The small Pacific nation of Samoa is reporting its first positive test for the coronavirus, although officials say a second test on the same patient came back negative.

Samoa was among a dwindling handful of nations to have not reported a single case of the virus.

According to the Samoa Observer, officials say the patient is a sailor who has been in quarantine since flying in from New Zealand on Friday. The sailor tested positive four days after arriving, but a second test Thursday was negative.

The Cabinet was to meet to discuss the situation.

DENVER — Publics schools in Denver will go to fully remote learning for all grades for the rest of the semester as the coronavirus surges.

Officials said Wednesday that remote learning will begin for more than 90,000 students in Colorado’s largest school district on Monday and run through the end of winter break. The district’s decision also applies to special education students.

ST. PETERSBURG, Fla. — Five Florida mayors are expressing concern about the rising number of coronavirus cases in the state, and are urging Gov. Ron DeSantis to change his approach to the pandemic.

Following a months-long decline from a huge summer spike in coronavirus infections, Florida has seen a mid-autumn climb in COVID-19 cases and hospitalizations. Still, the governor has resisted a return to statewide restrictions in place earlier in the year.

TOPEKA, Kan. — Kansas Gov. Laura Kelly has issued a new mask mandate in hopes of lessening the spread of the coronavirus after the state again reported another record seven-day increase in new cases.

State law allows Kansas’ 105 counties to opt out of the order. Most did when Kelly issued a similar order in July. But the state’s rolling seven-day average for new coronavirus cases was more than nine times higher Wednesday than it was than when her first order took effect.

Kelly’s order takes effect Nov. 25, the day before Thanksgiving, and only in counties that don’t yet have their own mask mandates. That is a majority of the state's counties.

The governor says she is giving counties a week to work out their own mask rules.

Bruins rally past Flyers for 5-4 shootout win in home o ...