Youssoufa Moukoko is the youngster who made the Bundesliga rewrite its rulebook.

The Borussia Dortmund striker will be allowed to make his debut against Hertha Berlin on Saturday after celebrating his 16th birthday the day before. If he plays, Moukoko will be the youngest player in league history.

The league had Moukoko in mind when it dropped the minimum age from 17 to 16 at a meeting in April. He's been a regular in first-team training since August. 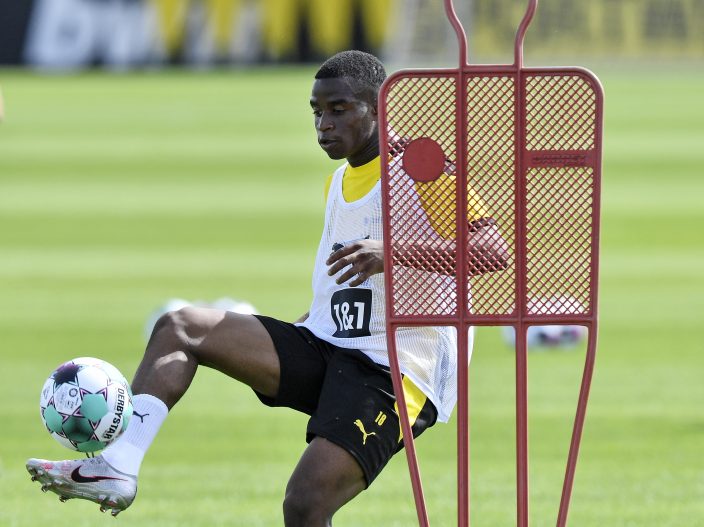 FILE - In this Monday, Aug. 3, 2020 file photo, Dortmund's Youssoufa Moukoko controls the ball during the first training session of German Bundesliga club Borussia Dortmund at the training grounds in Dortmund, Germany. Moukoko will be eligible to make his Bundesliga debut against Hertha Berlin on Saturday, Nov. 21, 2020, one day after his 16th birthday. (AP PhotoMartin Meissner)

Moukoko said he found it hard to get used to training with Dortmund’s senior team, which is already packed with young talent like 17-year-old midfielder Jude Bellingham, 18-year-old midfielder Gio Reyna and 20-year-old forwards Jadon Sancho and Erling Haaland.

“That was excellent. I got home and I still didn’t really grasp it," Moukoko said in a video produced by Dortmund. “But after that I understood that I’ve been working for that, to be here, and now I’m here and I have to give my best.”

A smart striker with a powerful shot and perfectly timed runs off the ball, there's no question that Moukoko has outgrown the youth game.

Moukoko first played under-17 soccer when he was 12 and made his debut in the under-19 league at just 14. Last season, he scored 34 goals in 20 appearances for Dortmund's under-19 team. This season, he has played four games and scored 13 goals, with at least a hat trick in each match.

Germany has historically preferred to keep young talent busy in the under-19 league rather than sitting on the bench in the Bundesliga. However, that opened up a chance for foreign clubs to sign German youngsters by offering the prospect of an earlier pro debut.

Moukoko said he isn't worried about when his Bundesliga debut will come — against Hertha, or a little later — because “I know I will definitely have my debut some time.”

Moukoko was born in Cameroon and grew up in Germany. During a youth game against local rival Schalke last month, he was racially abused by opposing supporters after completing his hat trick. German soccer federation judge Torsten Becker condemned the “inhuman insults and threats of violence," and Schalke issued an apology.

Moukoko's rapid rise is exceptional even for Dortmund, with its record of developing young talent. But it's not a guarantee of a world-class career.

Nuri Sahin has held the record for youngest Bundesliga player since his debut for Dortmund in 2005. Amid intense hype, the midfielder went on to Real Madrid and Liverpool but played only a handful of games for either club. At 32, he's now with Antalyaspor in the Turkish league.

“So far he's only had the sun shine on him. He hasn't had rainy days yet, but those rainy days will come,” Sahin said in Monday's edition of Kicker magazine. “The important thing then is that you have people who accompany you and make it clear to you that negative headlines come with the territory.”

An evacuation order that was issue ...