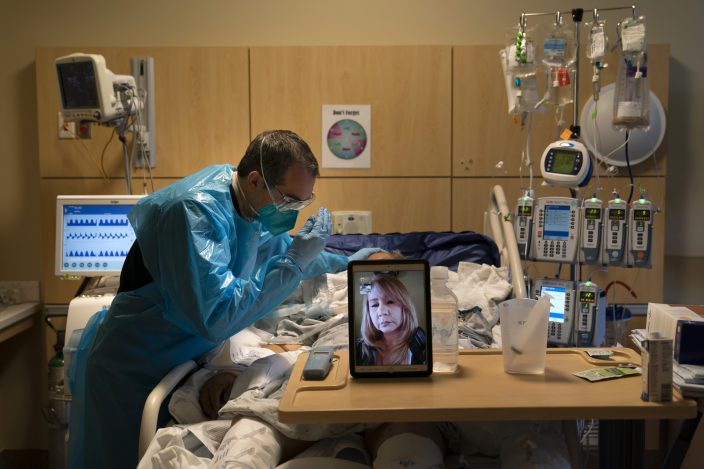 Chaplain Kevin Deegan prays for COVID-19 patient Pedro Basulto while on a video call with the patient's daughter, Grace, at Providence Holy Cross Medical Center in the Mission Hills section of Los Angeles, Thursday, Nov. 19, 2020. "These video calls have been a lifeline for families," said Deegan. "It can be emotionally exhausting and very draining, but it also an honor to be a bridge for the family." (AP PhotoJae C. Hong)

VIRUS OUTBREAK-US SURGE — With the coronavirus surging out of control, the nation’s top public health agency pleaded with Americans not to travel for Thanksgiving and not to spend the holiday with people from outside their household. The Thanksgiving warning from the Centers for Disease Control and Prevention came as the White House coronavirus task force held a briefing for the first time in months and Vice President Mike Pence concluded it without responding to questions by reporters or urging Americans not to travel. By Mike Stobbe and Heather Hollingsworth. SENT: 1,140 words, photos.

VIRUS OUTBREAK-TREATMENT CLASH — Health officials around the world are clashing over the use of certain drugs for COVID-19, leading to different treatment options for patients depending on where they live. The World Health Organization guidelines panel advised against using the antiviral remdesivir for hospitalized patients, saying there’s no evidence it improves survival or avoids the need for breathing machines. By Chief Medical Writer Marilynn Marchione. SENT: 710 words, photo. 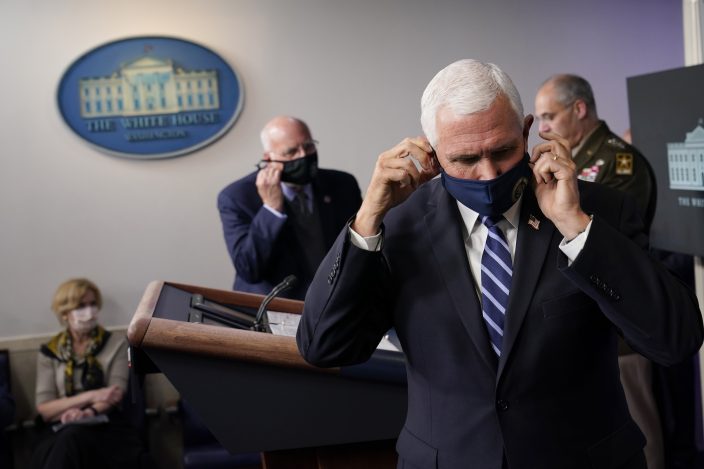 BIDEN-BIRTHDAY — President-elect Joe Biden turns 78. In exactly two months, he’ll take the reins of a politically fractured nation facing the worst public health crisis in a century, high unemployment and a reckoning on racial injustice. He’ll be attempting to accomplish another feat: demonstrating to Americans that age is but a number. By Aamer Madhani. SENT: 930 words, photos.

ELECTION-2020-GEORGIA — A hand tally of ballots cast in Georgia for the presidential race has been completed, and it affirms Biden’s narrow lead over Trump, according to results released by the secretary of state’s office. The AP declared Biden the winner of Georgia and its 16 Electoral College votes, after the hand count confirmed the former vice president leads Trump by roughly 12,000 votes out of nearly 5 million counted. By Kate Brumback. SENT: 670 words, photos. With EXPLAINING ELECTION 2020-GEORGIA — Why AP called Georgia for Biden. 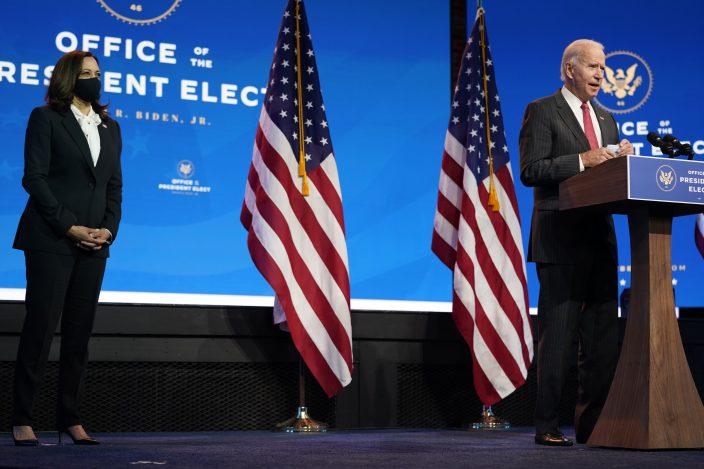 YEMEN-AFGHANISTAN-HUNGER — The twin baby boys lay on a bed of woven palm leaves in a remote camp for displaced people in Yemen’s north, their collar bones and ribs visible. They cried loudly, twisting as if in pain, not from disease but from the hunger gnawing away at them. Here, U.N. officials’ increasingly dire warnings that a hunger crisis is growing around the world are becoming reality. By Eissa Ahmed, Tameem Akhgar and Samy Magdy. SENT: 1,160 words, photos. 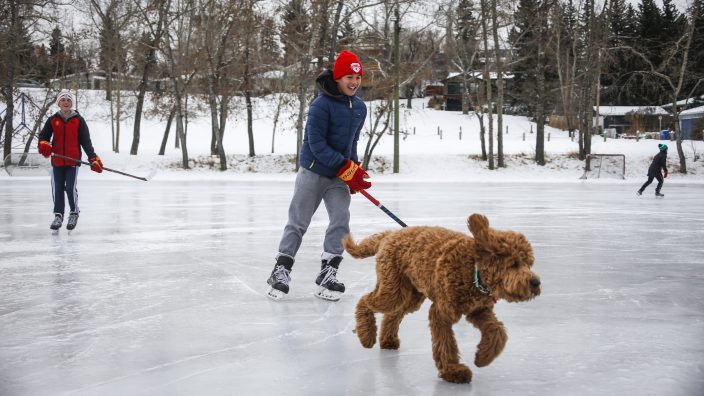 Charlie, an eight-month-old golden doodle, leads the charge with Landon DuPont, 11, centre, and Aden Bouchard, 11, left, as the trio play hockey on an outdoor rink in Calgary, Alberta, Thursday, Nov. 19, 2020, amid a global COVID-19 pandemic. The boys' school classes have been moved online because of the coronavirus outbreak. (Jeff McIntoshThe Canadian Press via AP) 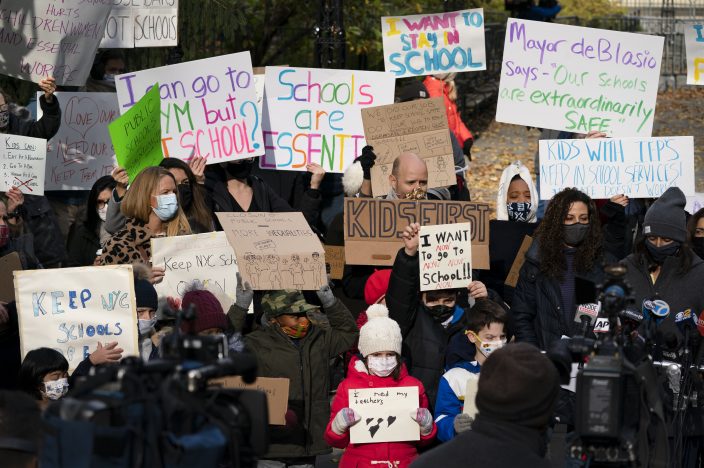 Parents and children gather in front of New York's City Hall to protest the closing of public schools, Thursday, Nov. 19, 2020. Mayor Bill de Blasio announced Wednesday that the nation's largest school system will move to remote learning only as the city tries to tamp down a growing number of coronavirus cases. (AP PhotoMark Lennihan)

BIDEN-PROGRESSIVES — Bernie Sanders and Elizabeth Warren, the faces of the Democratic Party’s far-left wing, are at risk of being excluded from the senior ranks of Biden’s administration as the incoming president balances the demands of his party’s progressive base against the political realities of a narrowly divided Senate. By National Political Writer Steve Peoples. SENT: 1,120 words, photo.

ELECTION-2020-WISCONSIN-RECOUNT — Wisconsin will begin recounts of the presidential race in the state’s two biggest and most Democratic counties. SENT: 800 words, photos.

VIRUS OUTBREAK-MEXICO — Mexico passes the 100,000 mark in COVID-19 deaths, becoming only the fourth country to do so amid concerns about the lingering physical and psychological scars on survivors. SENT: 830 words, photos. With VIRUS-OUTBREAK-THE-LATEST.

ONE-GOOD-THING-TEACHING-REFUGEES — Refugee women in Malaysia, some in their late 50s, are learning to read and write for the first time. SENT: 760 words, photos, video.

VIRUS-OUTBREAK-CALIFORNIA — California is imposing a nighttime curfew as its coronavirus figures soar but it will lean heavily on voluntary compliance and sheriffs of some counties say they won’t enforce it. SENT: 920 words, photos, video.

VIRUS-OUTBREAK-GREECE — Greek authorities are taking over two private health clinics and their staff in northern Greece as the region’s public hospitals are under severe pressure from a surge in coronavirus cases over the past few weeks. SENT: 420 words.

VIRUS-OUTBREAK-ASIA — Australia’s once hard-hit state of Victoria has gone three weeks without a new COVID-19 case for the first time since February. SENT: 710 words, photo.

TRUMP-LEGAL TROUBLES — A few miles south of the namesake tower where Trump began his run for president, New York prosecutors are grinding away at an investigation into his business dealings that could shadow him long after he leaves office in January. SENT: 1,190 words, photos. With TRUMP-TAXES — New York state probes Trump consulting payments that reduced his taxes.

APEC — Leaders from Japan and New Zealand warn countries against the temptation of retreating into trade protectionism, saying that keeping markets open is the way to restore a global economy battered by the COVID-19 pandemic. SENT: 390 words, photos.

FEDERAL EXECUTIONS — The U.S. government has executed a man who kidnapped and raped a 16-year-old Texas girl before dousing her with gasoline and burying her alive. SENT: 990 words, photo.

FINANCIAL-MARKETS — Asian shares were mixed in muted trading after Wall Street eked out modest gains amid a tug of war between worries about the worsening pandemic in the present and optimism that a vaccine will rescue the economy in the future. By Business Writer Yuri Kageyama. SENT: 840 words, photos.

MUSIC-LATIN GRAMMYS — A year after Rosalía made history by becoming the first solo female performer in 13 years to win the top prize at the Latin Grammys, Natalia Lafourcade followed in her footsteps with a big win at the 2020 show. By Music Writer Mesfin Fekadu. SENT: 740 words, photos.

CARDINALS-SEAHAWKS — Russell Wilson rebounded from his worst performance of the season to throw for two touchdowns, and the Seattle Seahawks moved back on top of the NFC West with a 28-21 win over the Arizona Cardinals. By Sports Writer Tim Booth. SENT: 880 words, photos.