The Denver Broncos have told season ticket holders that due to the increase of COVID-19 cases, Sunday’s game against the Miami Dolphins will be the last one played with fans in attendance at Empower Field at Mile High this season.

The Broncos have been allowing 5,700 fans into their games. 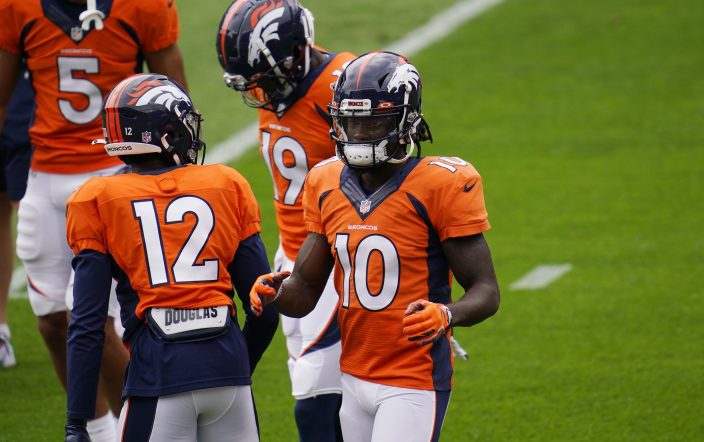 FILE - In this Aug. 29, 2020, file photo, Denver Broncos wide receiver Jerry Jeudy takes part in drills during NFL football practice in Denver. While the Broncos are heading into another lost season, there is one bright spot on the field—the team's rookie wide receivers Jeudy and KJ Hamler are excelling in the NFL. (AP PhotoDavid Zalubowski, File)

The Broncos’ final three home games, against the Saints, Bills and Raiders, will be played without any fans in the stands.

In a statement, the Broncos said, “Although we are confident in our strong safety protocols and have no evidence of any COVID-19 transmission traced to our home games, the increase in cases and hospitalizations locally requires us to adjust our future plans. Taking this precaution is consistent with the recent guidelines issued by local officials to limit gatherings with the holiday season approaching.” 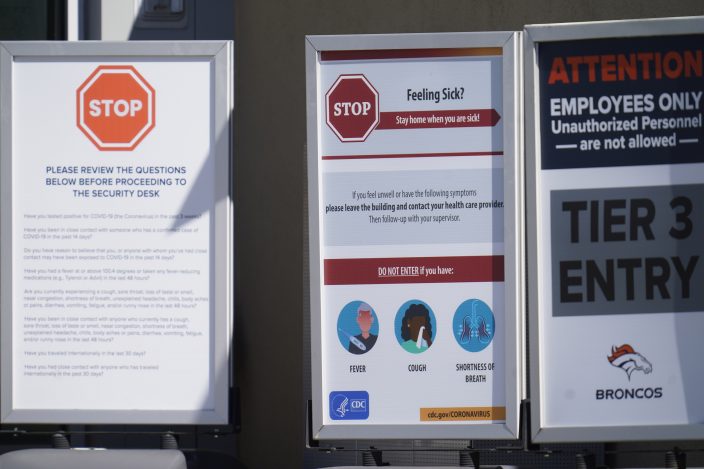 FILE - In this Oct. 28, 2020, file photo, signs about COVID-19 stand outside a door to enter the Pat Bowlen Fieldhouse during an NFL football practice at the headquarters of the Denver Broncos in Englewood, Colo. The pandemic has determined much of what we've seen thus far, and almost certainly will continue to with the predicted spikes in the coronavirus as the calendar heads toward winter. (AP PhotoDavid Zalubowski, File)

The Trojans will still play Middle Tennessee on Saturday, with special teams coordinator Brian Blackmon serving as interim coach of the Alabama school. Lindsey’s positive came from the team’s weekly testing on Wednesday for players and staff. The school said Friday that Lindsey “is experiencing very mild symptoms” and is isolating.

“While this is a situation that we had hoped we wouldn’t have to account for this season, it is something that we’ve had a comprehensive plan in place for since the start of preseason camp,” Lindsey said.

Because of scheduling issues stemming from the pandemic, this is the second game this season between Troy and Troy and Middle Tennessee. The Trojans won 47-14 on Sept. 19.

The New York Giants have had three more players test positive for COVID-19. The Giants, who have a bye this weekend, learned about the results Thursday night and told the unidentified players to self-isolate. Contract tracing has started.

Earlier this week, placekicker Graham Gano tested positive and punter Riley Dixon and long snapper Casey Kreiter were told to isolate because they had close contract with Gano. All three were placed on the Reserve/COVID-19 list.

The Giants (3-7) have had five players test positive this season. Starting left guard Will Hernandez tested positive in late October before a game with Tampa Bay on Nov. 2. He missed two games and returned last weekend against Washington.

Coaches and players have this weekend off. They are scheduled to return to work on Monday on an adjusted schedule.

New York’s next game is at Cincinnati on Nov. 29.

Totti writes on Instagram that he has recovered after “15 long days” of medical care at home. The 44-year-old Totti says he struggled to get a fever to subside and lost strength.

Totti’s father died last month from the coronavirus at 76.

On Day One, Biden to undo Trump policies on climate, vi ...

The Latest: Kareem Abdul-Jabbar urges public to get vaccine

The Latest: Aguero will miss Man City match on Wednesday