Cases of COVID-19 are rising again in the country with the world’s second-highest confirmed death toll, prompting Brazilian experts to express concern and politicians to downplay its severity in the midst of an election season.

Data from Johns Hopkins University show new cases reached a seven-day rolling average of 28,600 a day on Thursday, up from about 13,700 two weeks earlier.

With infections increasing from Brazil's biggest cities to the Amazon, there has been rampant speculation the nation could be on track to follow the path of U.S. and Europe, where new cases are spiraling. 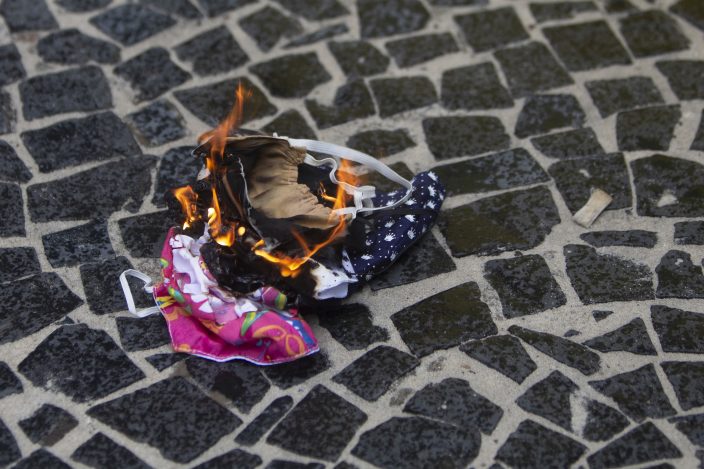 Protective masks are burned by supporters of Brazilian President Bolsonaro during a rally in favor of Bolsonaro's position that no one will be forced to use them and eventually get a coronavirus vaccine, on Copacabana beach in Rio de Janeiro, Brazil, Sunday, Nov.1, 2020. Brazil has confirmed more than 159,000 deaths from the virus, the second highest in the world, behind only the U.S. (AP PhotoBruna Prado)

Yet key authorities remain outwardly sanguine, claiming the increase to be either temporary or a statistical blip.

Many are brushing off calls for stricter measures aimed at containing the virus' spread at a moment when Brazilians are heading into a second round of municipal elections nationwide.

Manaus, the capital of Amazonas state, was slammed so hard early in the pandemic that hospitals turned away patients and the city cemetery dug mass graves. Its hospitals recently hustled to add dozens of intensive-care beds for COVID-19 patients, and the state extended by one month its decree closing bars, river beaches and clubs. Still, Marcellus Campêlo, the state’s health secretary, denied a looming wave of cases. 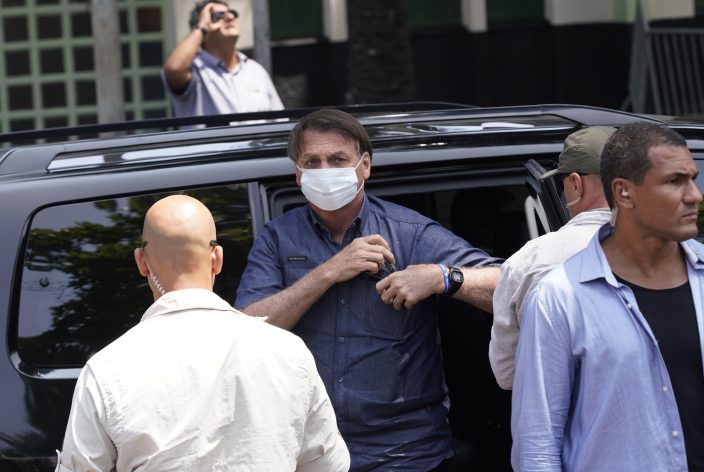 “We have had an increase in COVID-19 infections, which we think is due to Independence Day (Sept. 7), political party conventions and the start of the election period, which unfortunately generated a lot of crowds,” Campêlo told The Associated Press. “But data from hospitalizations isn’t close to what we saw in April or May.”

The Health Ministry's executive secretary, Élcio Franco, told reporters Thursday that the rise may be a statistical illusion caused by a glitch in the ministry's COVID-19 information system that prevented several states from uploading figures during several day in November's first week — making the count stack up later. System instability has made it impossible to know, said Franco.

But even accounting for the statistical anomaly, experts warn last week’s surge shouldn't be ignored, particularly as the number of cases confirmed this week has remained elevated. 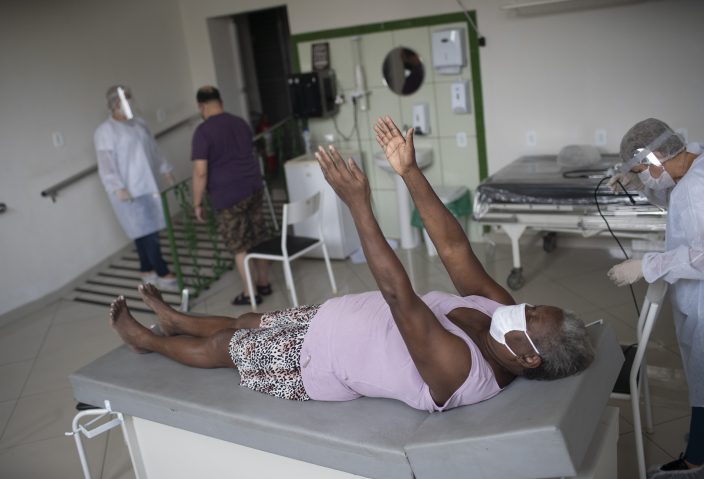 COVID-19 survivor Maria dos Santos, 67, gets outpatient physical therapy at the Movement and Life Institute in Rio de Janeiro, Brazil, Monday, Nov. 9, 2020. A volunteer medical team from the institute gives free physical rehabilitation to poor COVID-19 survivors in favelas, many suffering long-term effects from the disease even though they have recovered from the infection. (AP PhotoSilvia Izquierdo)

“We’re undoubtedly having a very significant increase in number of cases,” said Margareth Dalcolmo, a respiratory medicine professor at the state-funded Oswaldo Cruz Foundation. “People who remained protected and isolated in their homes during this long period have now been exposed, either because they’re leaving their homes, or because younger people are bringing the virus to their families.”

Sao Paulo state's government on Monday said that the number of COVID-19 patients hospitalized in the state had risen for the first time since August, with an 18% uptick from the prior week, to 1,009.

But Sao Paulo city Mayor Bruno Covas argued that despite the greater intensive-care occupancy, overall cases and deaths have been relatively stable. 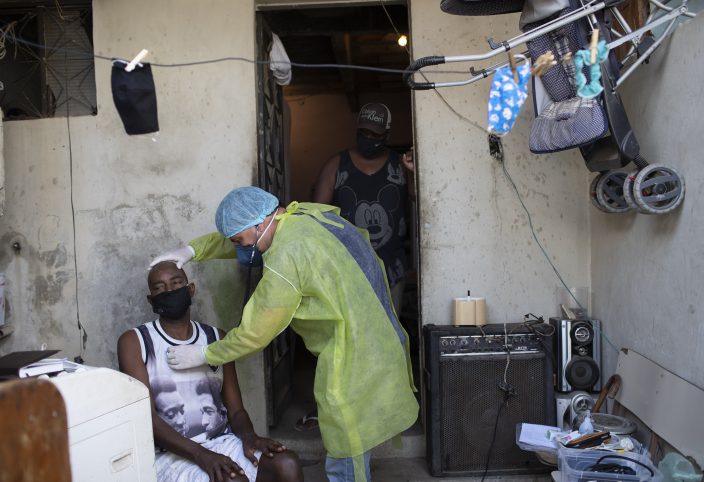 Dr. Wille Baracho checks on Mario de Santos, suspected of suffering COVID-19, at his home in the Vila Vintem favela in Rio de Janeiro, Brazil, Tuesday, May 19, 2020. Vila Vintem is home to more than 15,000 people. Its name reflects its undesirable location: when first settled, the swampy area was said to be worth not even a vintem – the cheapest coin at the time, akin to a penny. (AP PhotoSilvia Izquierdo)

"We will show that there is no second wave in the city, and that there is stability,” he said at a campaign event Thursday. At a subsequent press conference, he said that no figure indicates the need for more intense restrictions, particularly a lockdown.

Meanwhile the state government, which has recorded more than 40,000 deaths, is bracing for the situation to possibly worsen. Gov. João Doria issued two decrees Thursday prohibiting COVID-19 beds from being used for other treatments and barring all nonessential surgeries.

Ongoing mayoral elections probably contribute to municipal authorities’ reluctance to reinstitute tough measures, which they eased over recent months, according to Rafael Cortez, a partner at political consultancy Tendencias. Covas led in the first round of elections on Nov. 15, and will compete in a runoff on Nov. 29.

In Brazil — much like in the U.S. — the virus has been politicized by the president, Jair Bolsonaro, who has routinely downplayed COVID-19 and undermined local authorities’ restrictions on activity. On Nov. 13, Bolsonaro dismissed speculation of a second wave as “chit-chat.”

“Eventually, calling attention to this and enacting more aggressive policies, restricting mobility, can have an electoral cost,” Cortez said. “These local governments run the risk of discontenting part of the electorate. As there are runoffs, above all in big state capitals, we’ll likely see some incisive government action afterward.”

Sao Paulo’s Gov. Doria postponed an official review of quarantine measures from Nov. 16 to Nov. 30 — the day after runoffs. Mayor Covas is his political ally.

Local authorities also are loath to clamp new restrictions on an already depressed economy, especially ahead of the holiday spending season, according to Thiago de Aragão, director of strategy for Arko Advice, a political consultancy.

In Rio de Janeiro, Brazil’s second most populous city, Mayor Marcelo Crivella said this week that there has been an increase in the number of medical consultations for COVID-19, but that hadn’t translated into more hospitalizations.

But his own city's COVID-19 website shows hospitalizations creeping upward since the end of October, hitting their highest level since June. Like Covas, Crivella is in a reelection battle.

Paulo Lotufo, an epidemiologist and professor of internal medicine at the University of Sao Paulo, said that the increase in Brazilian cases is undeniable. What had been unclear until recently was whether that was caused by isolated super-spreader events, or represented widespread contagion.

Existing home sales rise in 2020 to highest in 14 years