NEW DELHI — India has reported 46,232 new confirmed coronavirus cases in the past 24 hours, with the situation particularly alarming in New Delhi.

Intensive care wards and the capital’s main crematorium are near capacity, and health officials this week found the prevalence of infections in markets much higher than expected. The city has added an average of 6,700 cases each day in recent weeks.

The next two weeks in the post-festival season, including celebrations for the Diwali holiday, are going to be important in determining which way the virus will go. The Health Ministry on Saturday also registered 564 deaths in the past 24 hours, taking total fatalities up to 132,726. 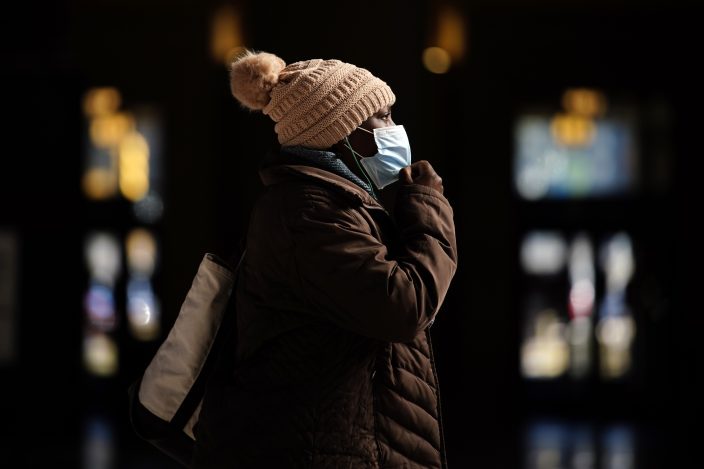 A woman walks through the 30th Street Station ahead of the Thanksgiving holiday, Friday, Nov. 20, 2020, in Philadelphia. With the coronavirus surging out of control, the nation's top public health agency pleaded with Americans not to travel for Thanksgiving and not to spend the holiday with people from outside their household. (AP PhotoMatt Slocum)

While the pace of new cases in the country of 1.3 billion appears to be slowing, experts have cautioned that official figures may be offering false hope since many infections are undetected.

The two states of Madhya Pradesh and Gujarat have announced night curfews in at least in eight cities from Saturday. Northern Rajasthan state is also imposing restrictions on the assembly of more than four people during nighttime. 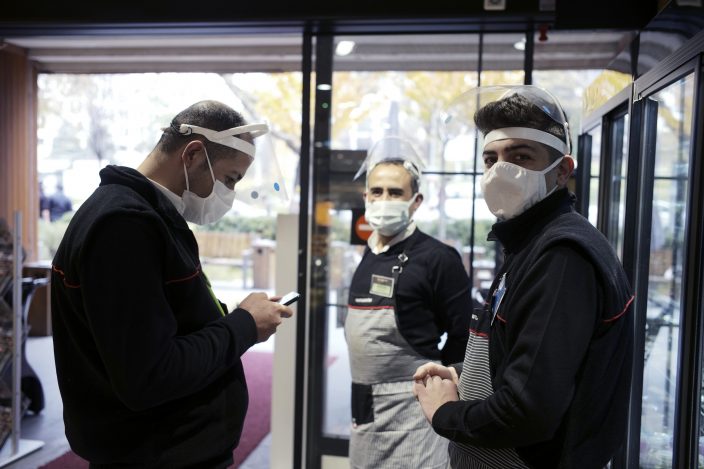 Workers wearing masks to help protect against the spread of coronavirus, stand at the entrance of a food market, in Ankara, Turkey, Friday, Nov. 20, 2020. Turkey's daily coronavirus deaths hit a record high as a series of restrictions aiming to slow the surge of COVID-19 infections came into effect. The Health Ministry reported 141 deaths on Friday - the highest number of fatalities in one day for Turkey since the start of pandemic.(AP PhotoBurhan Ozbilici)

— Daily COVID-19 deaths in US reach highest level since May

— Pfizer, BioNTech seek emergency use of COVID-19 shots in US

— Republican governors in some hard-hit states are refusing to ask families to limit Thanksgiving celebrations despite warnings from federal health officials that gatherings could worsen a coronavirus surge that’s already spinning out of control. 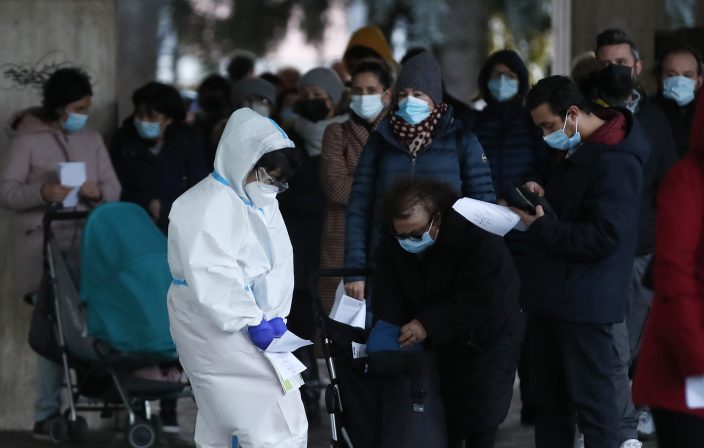 People line up outside a testing facility in Bolzano, northern Italy, Friday, Nov. 20, 2020. Citizens in Italy’s small Germany-speaking province of South Tyrol were lining up Friday at schools, gymnasiums and pharmacies for a mass COVID-19 screening that officials hope will speed a lifting of the partial lockdown and get children back to school. (AP PhotoAntonio Calanni)

— Maryland lawmakers are renewing criticism of Gov. Larry Hogan’s procurement of a half million COVID-19 tests from South Korea after The Washington Post reported the first batch was flawed and never used. 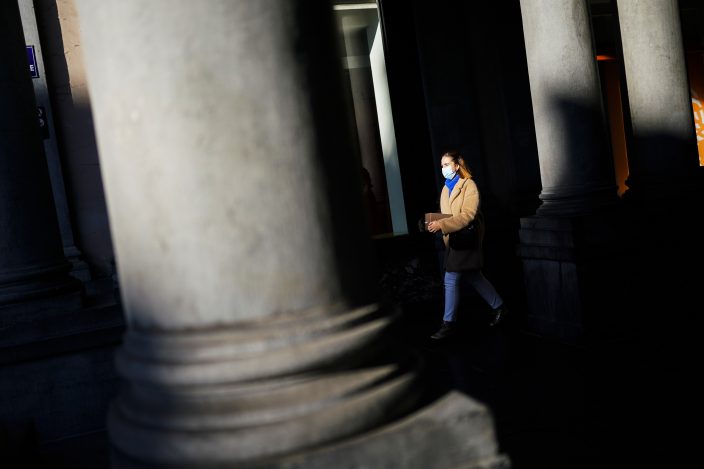 A woman, wearing a face mask to prevent the spread of the coronavirus COVID-19, walks along a commercial street in downtown Brussels, Friday, Nov. 20, 2020. The European Union's top official said on Thursday that two COVID-19 vaccines could receive conditional market authorization as early as the second half of December. (AP PhotoFrancisco Seco)

SEOUL, South Korea -- South Korea has reported 386 new cases of the coronavirus in a resurgence that could force authorities to reimpose stronger social distancing restrictions after easing them in October to spur a faltering economy.

The figures released by the Korea Disease Control and Prevention Agency on Saturday brought the national caseload to 30,403, including 503 deaths. 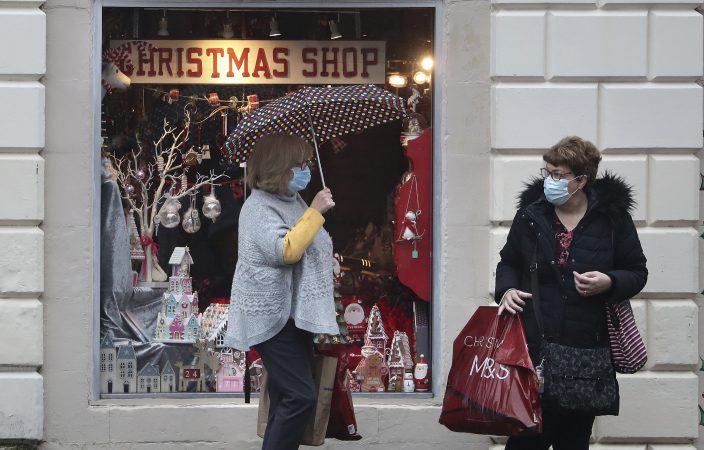 People wearing face coverings outside a Christmas Shop in Stirling, Scotland, Friday Nov. 20, 2020. This shop will close later Friday along with other non-essential shops, bars, restaurants, hairdressers and visitor attractions whilst schools remain open, due to the latest government restrictions imposed to slow the spread of coronavirus. (Andrew MilliganPA via AP)

More than 270 of the new cases came from the densely populated Seoul metropolitan area, where health workers have struggled to track transmissions in schools, private tutoring academies and religious facilities.

Infections were also reported in other major cities including Busan, Daejeon, Gwangju and Asan.

South Korea has so far managed to weather its COVID-19 epidemic without major lockdowns, relying instead on an aggressive test-and-quarantine campaign and mask-wearing.

Officials eased distancing measures to the lowest level in October, which allowed high-risk venues such as nightclubs and karaoke bars to reopen and fans to return to professional sports.

But the Korean Society of Infectious Diseases said Friday that the country could be reporting more than 1,000 new infections a day in a week or two if social distancing measures aren’t effectively strengthened.

Inslee said that businesses would be able to apply for the assistance to help blunt the impact of restrictions that took effect this week, including the closure of fitness facilities and gyms, bowling centers and movie theaters, and the requirement that restaurants and bars to be limited to to-go service and outdoor dining.

The economic package also includes $20 million in rental assistance and $15 million in utility payment assistance for those with low income. All of the funding is part of federal coronavirus outbreak assistance funds distributed to states.

CASPER, Wyo. — Wyoming Gov. Mark Gordon has announced new limits on indoor and outdoor public gatherings. But he has not implemented a statewide mask mandate as coronavirus cases continue to surge across the state.

The new order goes into effect Nov. 24. No statewide mask mandate was approved, though nearly all of the county health officers have called for one as virus cases, hospitalizations and deaths have substantially increased in recent weeks.

The Texas Hospital Association is now appealing for families to keep holiday gatherings “very small” as doctors and nurses struggle to keep up with rising caseloads. The group says staff are “tired and emotionally drained” and worried about the health of their own families.

The New York Post reported Friday that the New York Republican was being treated at a Long Island hospital.

“I’m weak but I feel good,” the 83-year-old told the newspaper in a phone interview. He said he had a light fever and congestion.

D’Amato said he started feeling unwell late last week, and didn’t know where he had gotten exposed to the virus. He said he had been mainly working from home, where he lives alone.

“Remember, your decisions are going to be what determines how many people live or die. Do your part,” Gov. Andy Beshear said, urging Kentuckians to follow the new requirements.

Starting Friday, private indoor gatherings are limited to two households, with a maximum of eight people. For roughly three weeks, bars and restaurants must close indoor dining, though they are permitted to continue curbside pickup, delivery and outdoor dining services.

Event venue capacity is limited to 25 people. Gym capacity is lowered to 33%, and group classes, team practices and competitions are prohibited. Beshear has also encouraged houses of worship to refrain from in-person services.

DETROIT — A judge on Friday declined to halt a three-week ban on indoor dining in Michigan that is one of the most recent coronavirus restrictions imposed by Gov. Gretchen Whitmer’s administration.

The state health department, meanwhile, reported a new daily high of confirmed COVID-19 cases, 9,779, and 53 additional deaths as the virus continued to spike.

In his ruling, U.S. District Judge Paul Maloney in Kalamazoo said a restraining order halting the indoor dining ban wouldn’t be appropriate, especially when the state hasn’t had a chance to respond to the lawsuit.

The Michigan Restaurant & Lodging Association, which has thousands of members, is suing to try to stop the indoor dining ban that began Wednesday. The group said restaurants can take further steps to reduce coronavirus risk without cutting off customers.

The group said its members were being unfairly treated compared to other businesses. The judge, however, wasn’t swayed.

Maloney scheduled the next hearing for Nov. 30, nearly two weeks into the three-week ban.

TOPEKA, Kan. — Kansas is including movie theaters among the businesses to receive aid as the state gets close to wrapping up its distribution of federal coronavirus relief funds.

Legislative leaders signed off Friday on a proposal from Gov. Laura Kelly’s pandemic recovery office to allocate $38.5 million in federal relief funds. The state received $1.25 billion and must spend the dollars by the end of the year.

The proposal called for distributing $20 million for aid to businesses that have struggled because of restrictions imposed during the coronavirus pandemic and $18.5 million on public health.

The funds for businesses include $5 million specifically for movie theaters, to be distributed $10,000 per screen. House Appropriations Committee Chairman Troy Waymaster, a Bunker Hill Republican, received assurances during the meeting of legislative leaders with Kelly that one- or two-screen theaters in small towns will be eligible.

SKOPJE, North Macedonia — North Macedonia has declared its first-ever nationwide state of emergency, allowing authorities to more easily use the armed forces as well as private resources to fight the pandemic.

The 30-day order, the first of its kind since the Balkan nation became independent in 1991, will take effect Saturday and was imposed after COVID-19 treatment capacity reached its limit.

The army will be used to help civilian authorities transport patients and build field hospitals.

Government-imposed restrictions have so far failed to curb a rise in infection rates. A total of 1,462 people have died in the landlocked country of around 2 million people from the pandemic — with 39 deaths recorded in the last 24 hours and an estimated 20,000 cases still active.

TORONTO — Canada’s largest city is going back on lockdown.

The province of Ontario announced Friday Toronto and the surrounding Peel Region will go into lockdown on Monday.

Premier Doug Ford and health officials say they won’t allow indoor organized events or social gatherings except for members of the same household. Restaurants and bars will only be allowed to offer takeout and delivery. Retail will only be open for curbside pickup or delivery except for big box stores.

The stricter measures come as Ontario reports 1,418 new cases of COVID-19 Friday, including 393 in Toronto and 400 new cases in Peel Region.

The founder of MyPillow, a vocal a ...