The daily tally of confirmed COVID-19 cases in Japan hit a record for the fourth day at 2,508, the Health Ministry said Sunday.

Japan has had fewer than 2,000 coronavirus-related deaths so far, avoiding the toll of harder hit nations. But fears are growing about another surge. A flurry of criticism from opposition legislators and the public has slammed the government for being too slow in halting its “GoTo” tourism campaign, which encouraged travel and dining out with discounts.

Prime Minister Yoshihide Suga on Saturday scrapped the campaign, but only after many people had already made travel reservations for a three-day Thanksgiving weekend in Japan. 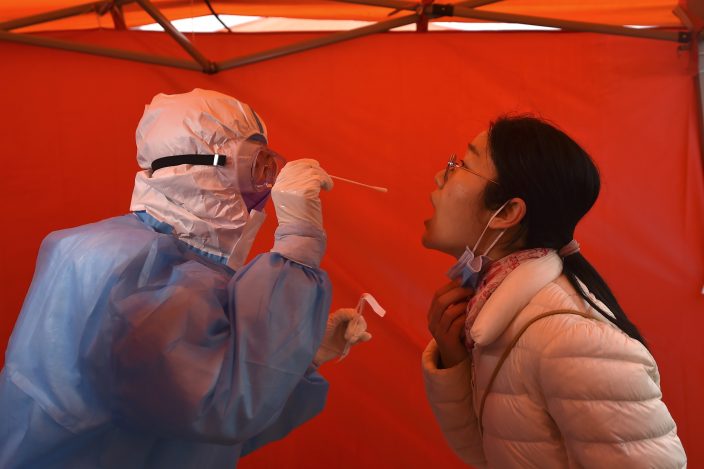 In this photo released by China's Xinhua News Agency, a worker wearing a protective suit takes a throat sample from a woman at a COVID-19 testing site in Tianjin, China, Saturday, Nov. 21, 2020. China is starting mass testing on 3 million people in a section of the northern city of Tianjin and has tested several thousand others in a hospital in Shanghai after the discovery of a pair of cases there. (Zhao ZishuoXinhua via AP)

Airports and restaurants have been packed. Some say the government should have offered to pay for cancellations, or stepped up PCR testing instead, if the goal is to keep the economy going amid a pandemic. Tutorials are circulating online on the proper way to eat and drink at restaurants while wearing masks.

— South Australia and Victoria states eased COVID-19 restrictions Sunday as Australia heads into summer in a better position to fight the virus. Victoria, which was hardest hit, has gone 23 days without a new infection. In response, Premier Daniel Andrews announced a number of changes to restrictions. Mask-wearing outdoors, which until now has been mandatory, is no longer required where social distancing is possible. Masks will still have to be worn indoors and carried at all times. Home gatherings of up to 15 people will be allowed and up to 50 people can gather outdoors. Up to 150 people will be allowed at weddings, funerals or indoor religious services. Residents of South Australia emerged from a state-wide lockdown at midnight Saturday, and are now able to visit bars and restaurants in groups of up to 10 and host gatherings up of to 50 people with social distancing. Gyms and beauty salons can open and students will return to schools from Monday. The border between Victoria and New South Wales states, closed at the height of the Victoria outbreak three months ago, will reopen Sunday. New South Wales Premier Gladys Berejiklian said, “We never want to see this ever again. We hope this is the last time that in our lifetime this border is closed.”

Bruins rally past Flyers for 5-4 shootout win in home o ...