Bruce, the fiberglass shark made from the “Jaws” mold, is ready for his close-up. The 1,208 pound, 25-foot-long, 45-year-old shark, famous for being difficult to work with on the set of Steven Spielberg’s classic thriller, on Friday was hoisted up in the air above the main escalator of the new Academy Museum of Motion Pictures in Los Angeles where he will greet guests for the foreseeable future. And this time, he cooperated.

It is the culmination of years of planning, including a seven-month restoration by special effects and makeup artist Greg Nicotero. The shark is expected to be a major draw for the museum, which plans to open its doors to the public on April 30, 2021.

Super fans know that the “Jaws” crew started calling the shark Bruce after Spielberg’s lawyer Bruce Ramer. They’ll also know that the Bruce that will greet guests in the museum wasn’t technically in “Jaws.” He's a replica and it’s the last of his kind. The three mechanical Great Whites designed by art director Joe Alves were destroyed when production wrapped. But once the film proved to be a box office phenomenon, a fourth shark was made from the original mold. For 15 years he hung at Universal Studios Hollywood as a photo opportunity for visitors until he wound up at the Sun Valley junkyard he would call home for the next 25. Nathan Adlan, who inherited his father’s junkyard business, donated him to the museum in 2016. 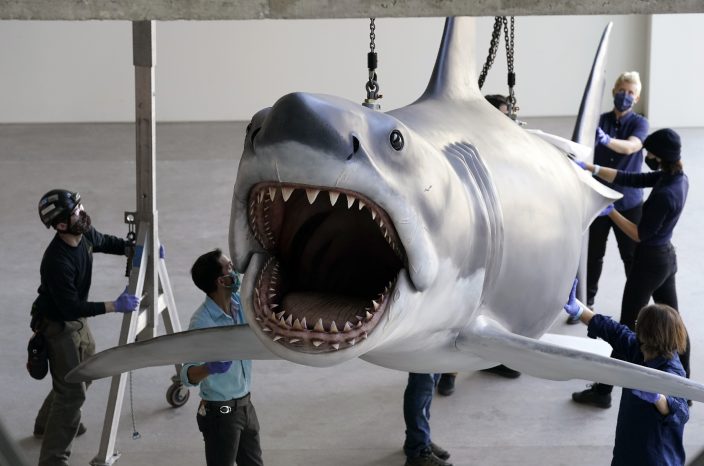 A fiberglass replica of Bruce, the shark featured in Steven Spielberg's classic 1975 film "Jaws," is lifted into a suspended position for display at the new Academy of Museum of Motion Pictures, Friday, Nov. 20, 2020, in Los Angeles. The museum celebrating the art and science of movies is scheduled to open on April 30, 2021. (AP PhotoChris Pizzello)

But Bruce wasn’t quite camera ready. A quarter century in the California sun, plus all the years of being re-painted at Universal had taken its toll on the poor creature, who badly needed care and attention. Nicotero, who has worked on “Day of the Dead” and “The Walking Dead,” said he got into the business because of “Jaws” and volunteered for the task of bringing him back to life.

“One of the great things about being the Academy Museum of Motion Pictures is that we have access to Academy members in all craft areas of the industry,” said Academy Museum Director Bill Kramer. “We can call on our members and other members of the film industry who have either worked on the film that the artifact is from or know enough about the provenance and work that had been done to help us restore it. We’re in an incredibly privileged position.”

Restoration was one thing, but loading Bruce into the museum proved to be another ordeal. Pritzker Prize-winning architect Renzo Piano made sure to account for large-scale objects in his restoration of the Saban Building, which was originally the May Company department store. But Bruce is their biggest piece to date and everyone soon realized that he wouldn't be able to get into the building with his fins attached. 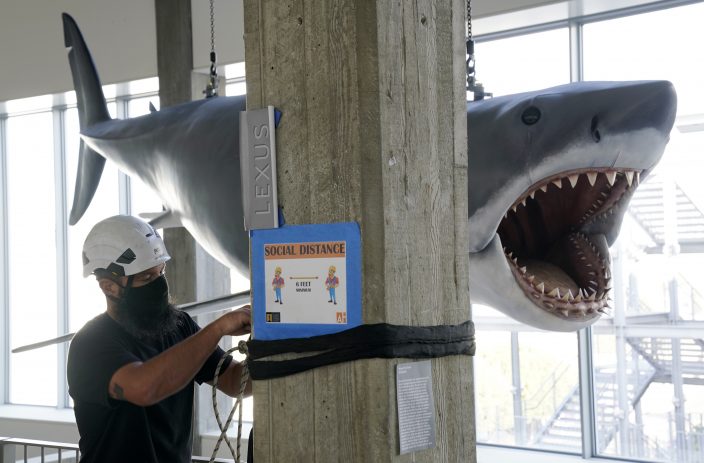 A fiberglass replica of Bruce, the shark featured in Steven Spielberg's classic 1975 film "Jaws," looms over worker Will Wilson of LA Pro Point after it was raised into a suspended position for display at the new Academy of Museum of Motion Pictures, Friday, Nov. 20, 2020, in Los Angeles. The museum celebrating the art and science of movies is scheduled to open on April 30, 2021. (AP PhotoChris Pizzello)

Last week Bruce was transported from a storage facility on a 70-foot flatbed to the museum at Fairfax Avenue and Wilshire Boulevard where engineers, construction workers and art handlers removed two panels of glass three stories up to get him into the building. Once inside with fins reattached and a final touching up, Bruce was hooked onto five cables, each of which could hold his weight if any were to fail, and hoisted up on a truss by remote control to get into position in the building’s “spine” where he faces East and is visible from Fairfax.

Shraddha Aryal, Vice President of Exhibition Design and Production, described the years of painstakingly detailed modeling and work that went in to preparing for this moment, including full scale mock-ups and light tests to ensure that all of Bruce’s 116 teeth would be visible to tourists.

Seeing him lifted into the building was “such an exciting moment,” she said.

Kramer said they expect Bruce to be a huge draw for visitors, which is why he’ll be hanging in a public area where people can see him without having to pay for a museum ticket. Almost a half century after Bruce made generations of kids and adults scared to get in the water, he's now beckoning film lovers into a museum.

“We plan on having Bruce greet our visitors for as long as we can keep him up there,” Kramer said. “It’s a free space and a free moment for our visitors to bring delight and hopefully inspire them to learn more about the movies, the history of visual effects and how this prop was made.”

Curious visitors can come and check out the massive great white, the restaurant and the Spielberg Family Gallery to see a 10-minute film on the history of cinema before even committing to purchasing a ticket.

There will also be a public programming series on conservation and restoration drawing on items from the collection that have been restored including the ruby slippers from “The Wizard of Oz,” the Aries-1B from “2001: A Space Odyssey,” the extra-terrestrial from “Alien” and, of course, Bruce.

“There are so many stories that can take you places just through this one object,” Kramer said.