Hundreds of retirees staged a protest in the Belarusian capital on Monday to demand the resignation of the country's authoritarian leader who won his sixth terms in office in a disputed election.

Over 2,000 pensioners were estimated to have marched down a central avenue in Minsk in what has turned into a regular Monday rally, carrying red and white flags that have become the main symbol of the country's protests. They also held aloft portraits of opposition supporter Raman Bandarenka, who died earlier this month after reportedly being beaten by security forces.

“Grandmothers and grandfathers heal poorly from new wounds,” read one of the banners carried by demonstrators. At on point the crowd ran into a police cordon and broke up into smaller groups that went into different directions. 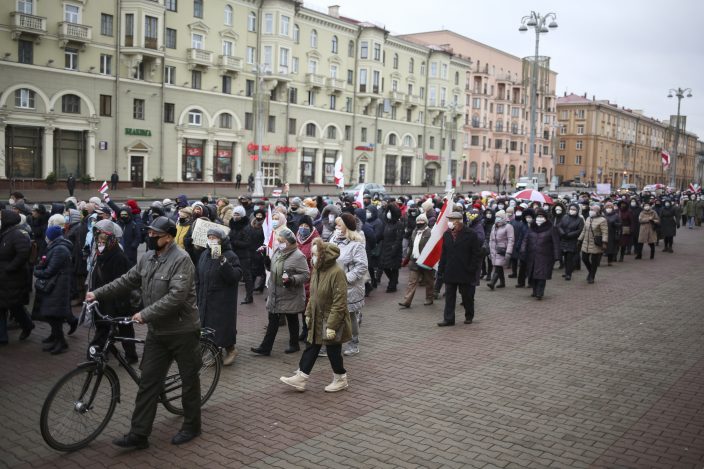 Belarusian pensioners walk during an opposition rally to protest the official presidential election results in Minsk, Belarus, Monday, Nov. 23, 2020. Large crowds of retirees have protested in the Belarusian capital to demand the resignation of the country's authoritarian leader who won his sixth term in office in a disputed election. Over 2,000 pensioners marched down a central avenue in Minsk in what has turned into a regular Monday rally. (AP Photo)

Mass protests gripped Belarus since official results from the Aug. 9 presidential election gave President Alexander Lukashenko a landslide victory over his widely popular opponent Sviatlana Tsikhanouskaya. She and her supporters refused to recognize the result, saying the vote was riddled with fraud.

Authorities have cracked down hard on the largely peaceful demonstrations, the largest of which attracted up to 200,000 people. Police used stun grenades, tear gas and truncheons to disperse the rallies. Thousands have been detained and many of them beaten since the election, human rights advocates say.

Belarus' Interior Ministry said Monday that 345 people were detained during protests across the country a day earlier. The Viasna human rights center puts the number at 390.

According to Viasna, at least one person was detained at Monday's protest.