No one thinks it’s time to write off Novak Djokovic or Rafael Nadal — or even Roger Federer — just yet. Well, they shouldn’t, anyway.

Still, the season-ending ATP Finals set the stage for an intriguing 2021 in men’s tennis with the emergence of Daniil Medvedev and the continued excellence of Dominic Thiem, a pair of 20-somethings who look ready to continue their climbs to the sport’s apex.

They’re part of a group of up-and-coming men that also includes Stefanos Tsitsipas, Alexander Zverev and Andrey Rublev, all of whom are showing signs they’re for real and ready to take the next steps. It gives everyone fodder for thought until action resumes in Australia in January, if the coronavirus pandemic allows. 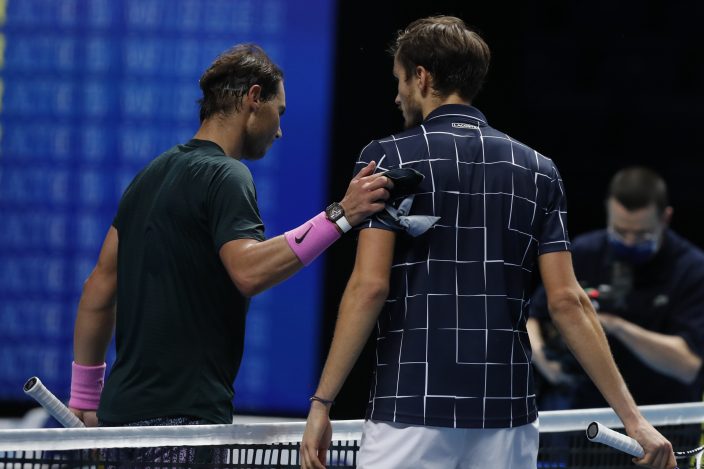 “The next few years, the Big Three still will play for every big title, but I guess there’s still going to be a time when those guys will retire — I don’t know, in three, four, five years,” Thiem said. “And then, I guess, we will be the favorites for all the big titles. For tennis, some exciting times are coming ahead.” 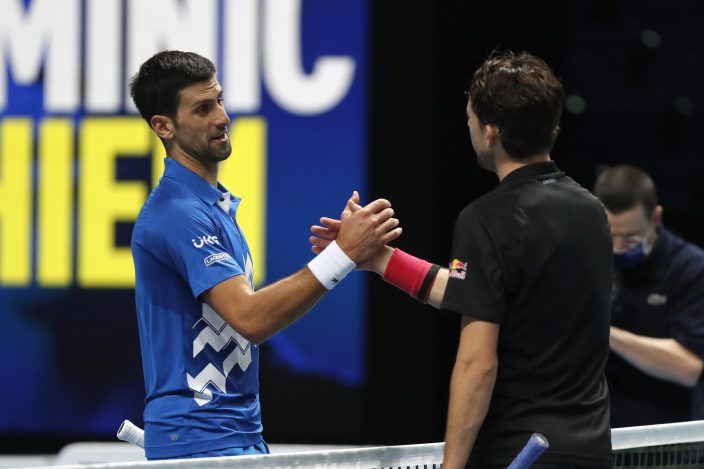 They reached the championship match with stirring three-set semifinal victories that felt a bit portentous: No. 3 Thiem knocked off No. 1 Djokovic, and No. 4 Medvedev eliminated No. 2 Nadal.

“An amazing accomplishment for a new generation,” Medvedev called it.

“It’s super for tennis. We are starting to ... (make) our marks,” said Medvedev, who also beat Djokovic in the round-robin portion of the tournament and became the first man in the 50-year history of the ATP Finals to defeat each of the players ranked 1-3 at the event.

Austria’s Thiem, 27, has appeared in four Grand Slam finals — losing twice to Nadal at the French Open, once to Djokovic at the Australian Open — and is now a two-time finalist at the ATP Finals (Tsitsipas beat him in 2019). Thiem's powerful baseline game is terrific, but he needs to add some variety and mid-match adaptability.

Russia’s Medvedev, 24, was the runner-up to Nadal at the 2019 U.S. Open and lost to Thiem in the semifinals there this year. His ability to think his way through a match might be unrivaled — he shifted tactics to transform his matches against Nadal and Thiem in London — and his hard-court success is undeniable, but to really reach the upper echelon and stay there, he’ll want to improve on clay (0-4 at the French Open) and grass (never past the third round at Wimbledon).

Greece’s Tsitsipas, Germany’s Zverev (who recently denied allegations of domestic violence made by a former girlfriend) and Russia’s Rublev are all under 24 and ranked in the Top 10.

None has won a major, although Zverev came quite close, holding a two-set lead before allowing Thiem to come back in the U.S. Open final.

It would be foolhardy to believe Djokovic, 33, and Nadal, 34, can’t add to their Grand Slam totals; even Federer, 39, should not be discounted after missing most of the year following two operations on his right knee.

They’ve combined to win 53 of the last 62 major championships and 57 in all: 20 apiece for Federer and Nadal, 17 for Djokovic.

And in 2020, they won two of three (Wimbledon was canceled because of the COVID-19 outbreak).

But after years of domination, they might finally have some worthy competition.

“Roger, Rafa, (Novak), and also Andy (Murray) — they did so much for the sport. They brought so many people to tennis. So many new fans to tennis. ... There’s going to be a time when they’re not around anymore,” Thiem said. “Then it’s going to be so important to keep all the tennis fans, to keep them with this great sport. And I think that’s our challenge.”

Howard Fendrich covers tennis for The Associated Press. Email him at hfendrich@ap.org or follow him on Twitter at https://twitter.com/HowardFendrich

Study: Employment rose among those in free money experi ...