Panthers defensive coordinator Phil Snow said last week Brian Burns was on the verge of a three-sack game because the second-year defensive end had been “so close” to the getting the opposing quarterback so many times this season.

Snow’s words nearly turned out to be prophetic on Sunday as Burns was in on three sacks — one solo and two split — helping the Panthers beat the Lions 20-0 and earn their first shutout since 2015.

Burns has six sacks and three forced fumbles and is emerging as one of the top pass rushers in the NFC. 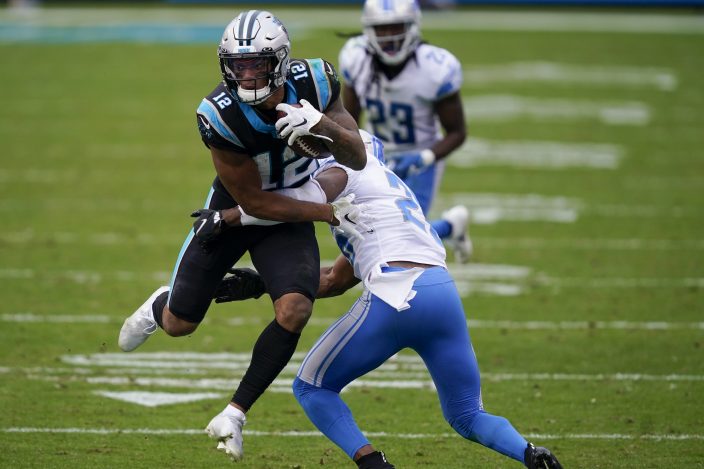 Burns has been drawing the majority of double-teams from opposing teams because he doesn't have much help on the defensive line following the season-ending injury to two-time Pro Bowl tackle Kawann Short. That prompted Snow to move Burns around along the defensive line to disguise their play calls, even allowing him to stand up at outside linebacker and drop into coverage at times. That seemed to confuse Matthew Stafford and the struggling Lions.

“They had no idea where we were coming from, they didn’t know if I was dropping, covering the slot, covering the back or if I was rushing off the edge or going into the `B' gap,” Burns said. “We were sending guys from all over the place and they messed up their protection a lot." 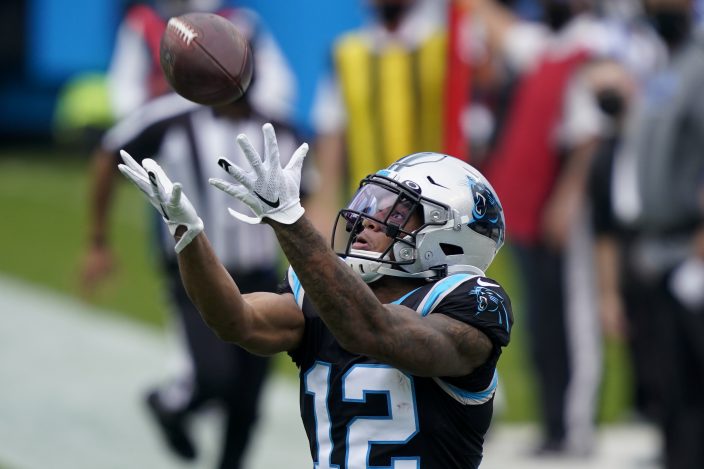 Carolina Panthers wide receiver D.J. Moore catches a pass during the first half of an NFL football game against the Detroit Lions Sunday, Nov. 22, 2020, in Charlotte, N.C. (AP PhotoGerry Broome)

Panthers safety Tre Boston said Burns, a first-round pick in 2019, is a star in the making.

“This is Year 2. I have to remind people sometimes that this guy is in Year 2," Boston said. "I can only imagine him down the road. He is going to be very, very special. ... As long as he is playing the way he is playing, he is going to be wreaking havoc for us for a long time.”

Added linebacker Jermaine Carter: “There aren't too many defensive ends who can drop into coverage and know what they're doing and then go sack the quarterback on third down.” 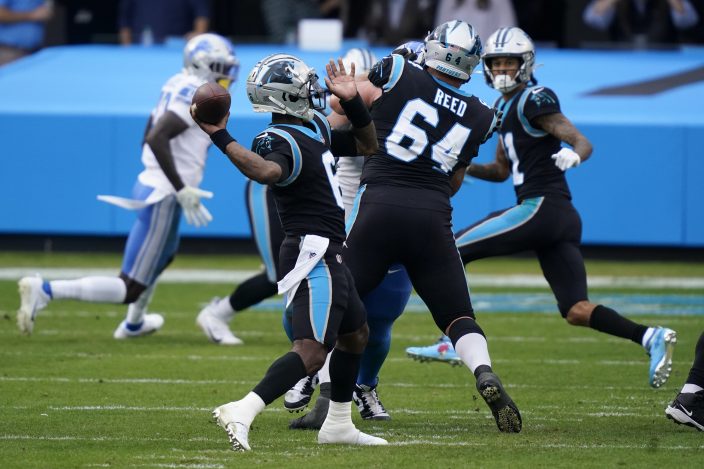 Carolina Panthers quarterback P.J. Walker throws his first NFL touchdown past during the second half of an NFL football game against the Detroit Lions Sunday, Nov. 22, 2020, in Charlotte, N.C. (AP PhotoGerry Broome)

Wide receiver Curtis Samuel is emerging as a big-time player for the Panthers with 311 yards from scrimmage and five touchdowns in his past five games. The versatile Samuel played some running back at Ohio State, so he has the natural skills to run the ball between the tackles, and the team isn't afraid to use him there. But his route running and receiving skills are steadily improving, as evidenced by his 17-yard touchdown reception. But what Panthers coach Matt Rhule likes about him the most is he's a great player to coach.

“He doesn't make excuses and he has a tough mindset,” Rhule said. 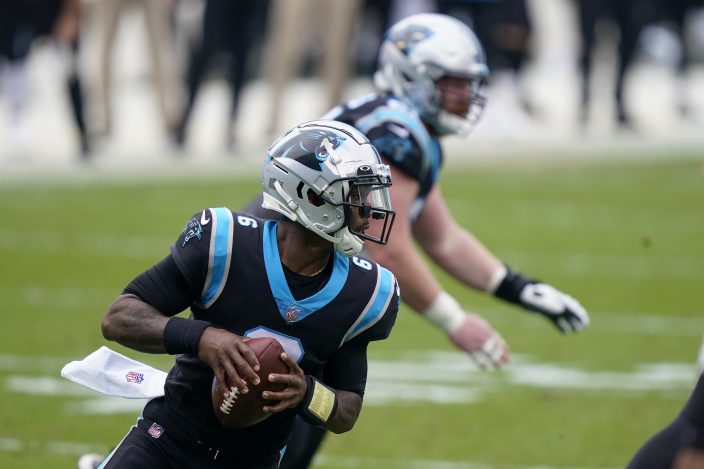 P.J. Walker was solid in his first start at QB on Sunday, throwing for 258 yards and a touchdown, but he was picked off twice in the end zone. Rhule noted “that could have cost us the game” if the defense hadn't played so well.

Some of Walker's mistakes can be written off to inexperience or a lack of being on the same page as his receivers. But he did make some promising throws in tight spots, including a 52-yard completion to D.J. Moore down the left sideline. 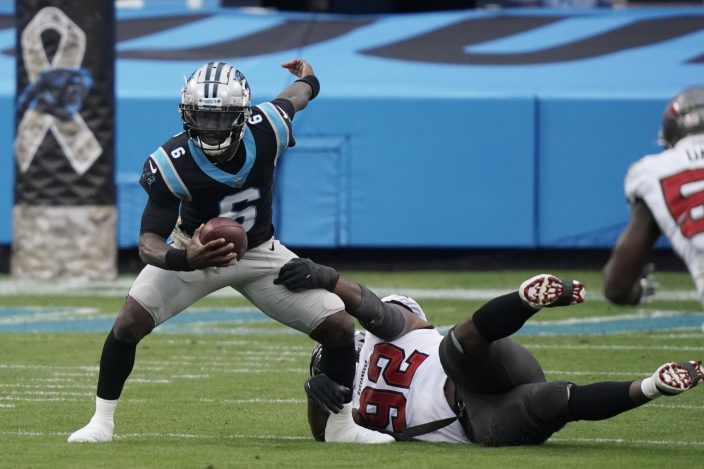 The Panthers hoped Moore would emerge as their No. 1 receiver this season and he's beginning to take that step toward replacing Robby Anderson in that role. Over the last two games Moore has 11 receptions for 223 yards and a touchdown. 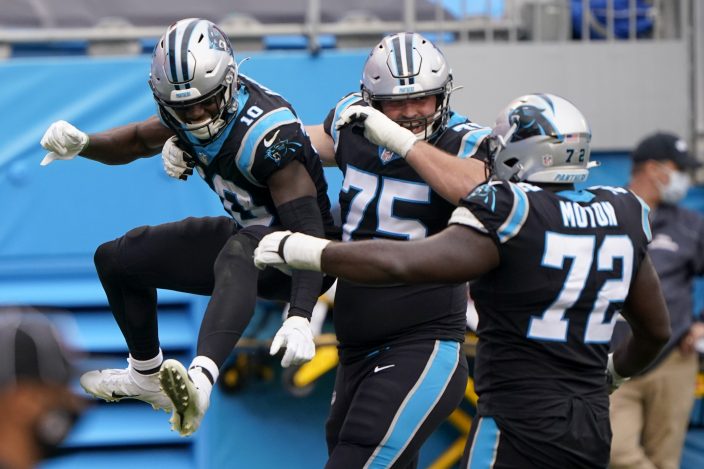 Game management issues continue to haunt the Panthers. On their first drive, the Panthers had a third-and-4 at the Detroit 38 but were flagged with 12 men in the huddle, prompting a 5-yard penalty that took them out of field-goal range.

QB Teddy Bridgewater was cleared by the medical staff to play Sunday, but Rhule decided he didn't feel right in playing him at 80%, especially given his past knee issues. Rhule is optimistic Bridgewater will practice Wednesday and play against the Vikings, his former team, on Sunday. Rhule didn't have an update on the status of running back Christian McCaffrey except to say he remains week to week. McCaffrey has missed the last two games with a shoulder injury. 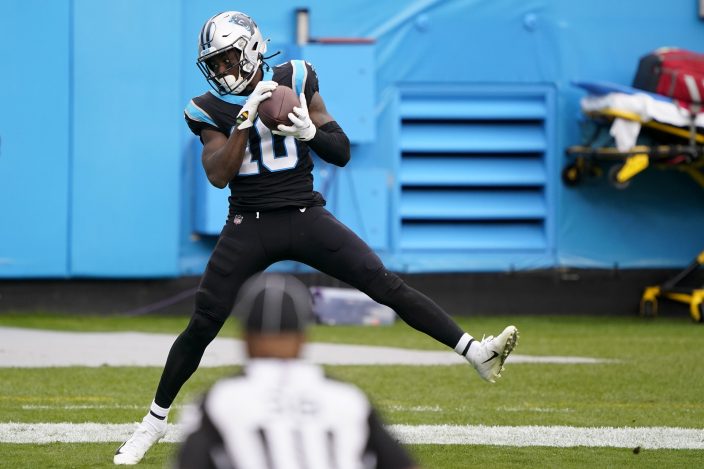 3 of 14 — Lions third-down conversions. The Panthers came in last in the league on third down defense at 55.3%, so that's a big step forward.

One week after giving up 46 points to Tom Brady and the Bucs, the Panthers pitched a shutout, a remarkable one-week turnaround. Some of that credit has to go to Carter, who got his first start at middle linebacker over Tahir Whitehead. Look for Carter to start again against the Vikings. 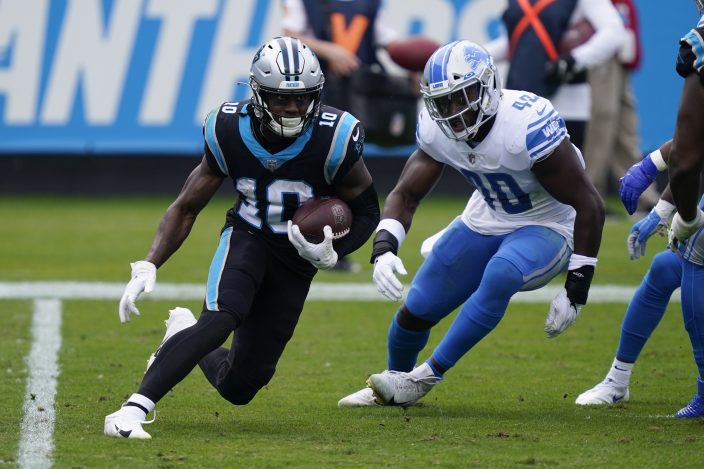