His patience with his young quarterback paid off in the Denver Broncos' biggest win of the season.

Drew Lock got off to another horrid start Sunday when he misfired on his first six passes, one of which was picked off for his AFC-leading 11th interception. 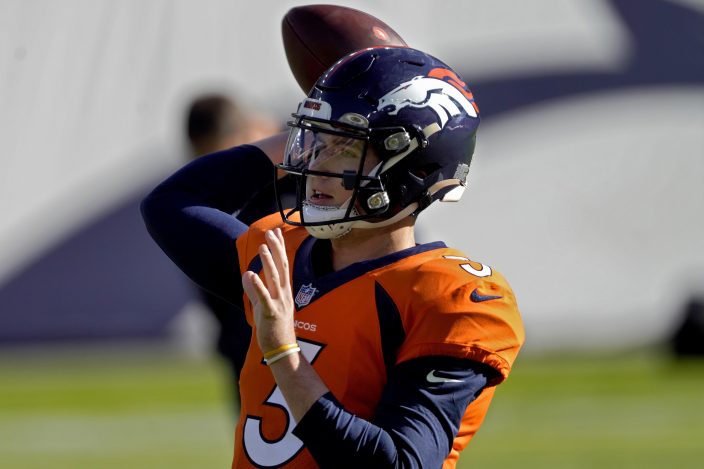 This came after a week in which he was beat up pretty good, first by the Raiders and then by the Broncos' faithful.

The Raiders intercepted him four times and sent him home with bruised ribs and a strained oblique. Broncos fans began looking toward the college ranks to see who might become John Elway's next QB target.

Now Lock's latest turnover had put the Broncos in a quick 7-0 hole against a Miami Dolphins team that hadn't lost in 49 days. A three-and-out followed and then Lock skipped a pass and overthrew another. 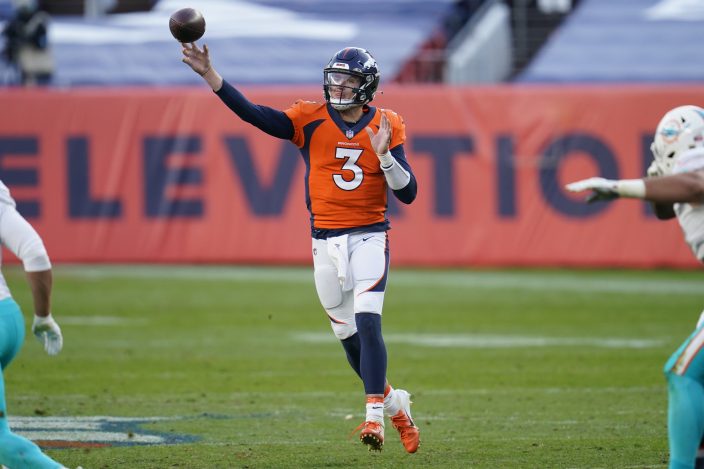 Denver Broncos quarterback Drew Lock (3) throws against the Miami Dolphins during the second half of an NFL football game, Sunday, Nov. 22, 2020, in Denver. (AP PhotoDavid Zalubowski)

He took the snap and zipped a 15-yard completion to KJ Hamler.

“That was a big one,” said Lock. “That was one of the plays that maybe last week or the week before we don’t make and we’re coming off the field with a different vibe on the sideline.”

After going just 4-for-31 on third-and-10-or-more in the first eight games, Lock has a half dozen conversions in 11 such situations the past two weeks.

“We’ve had too many of them, but we’ve converted our fair share” Fangio said. “We don’t give up on third-and-10, we think we can still get them.”

On Monday, Fangio said for the second time in a month that he didn’t contemplate benching Lock after a bad start, even though this time Brett Rypien had taken all of the first-team snaps last Wednesday, so he wouldn’t have been coming in completely cold.

“No, that thought never did cross my mind,” Fangio said, “and the work Brett got last week, the bulk of it was on Wednesday; Drew got the bulk of it Thursday and Friday.”

The game was the first since Nov. 1, 2015, against the Packers, that the Broncos topped 450 yards of offense and allowed fewer than 225 yards.

“I’ve always said a quarterback’s two best friends are a running game and a good defense,” Fangio said. “It reflected in Drew’s play after he threw the early interception. I think he was pretty solid after that.”

The Broncos piled up six sacks of Tagovailoa, sending him to the bench in the fourth quarter, and Justin Simmons’ third interception in four games sealed the victory when he picked off Ryan Fitzpatrick’s pass to DeVante Parker in the end zone with about a minute left.

For the first time all season, the 1-2 punch of running backs Melvin Gordon and Phillip Lindsay packed a punch with each of them topping 80 yards.

For once, the Broncos’ special teams wasn’t a blight, either as Dolphins return specialist Jakeem Grant Sr. had just one return for 6 yards.

Short-yardage play calls. Gordon was stuffed for no gain on fourth-and-inches at the Dolphins 14 when he ran up the middle into a wall of linemen on a day when the Broncos were so successful in bringing back the “Lombardi Sweep.”

Gordon, who scored two touchdowns, giving him a team-high seven.

Gordon, who fumbled going in for his third TD, giving him a team-high four.

RG Graham Glasgow (lower leg). On the COVID-19 front, DE Shelby Harris might return this week after missing three games, but Fangio said DC Ed Donatell might not return this week. He’s been out since Oct. 31.

6 — sacks against a Dolphins team that had only allowed 14 coming in.

4 — fumbles by Gordon in just 141 total offensive touches for Denver.

0 — fumbles by Lindsay in 558 total offensive touches in Denver.

Bottle up the formula that gave Lock time to settle in and find his rhythm because the Broncos’ schedule only gets tougher beginning with the New Orleans Saints’ visit Sunday.