Well, at least the New England Patriots have plenty of experience playing in meaningless December games.

The 11-time defending AFC East champions may still have a mathematical chance of making the playoffs this season. But for all practical purposes, they are playing out the string after losing on Sunday to the then-two-win Houston Texans (both against Jacksonville).

The Patriots (4-6) are three games out of first place in the division, and two games behind in the race for the extra, seventh playoff berth in the AFC. After coasting into the postseason during much of their two-decade dynasty, New England is about to see things from the other side. 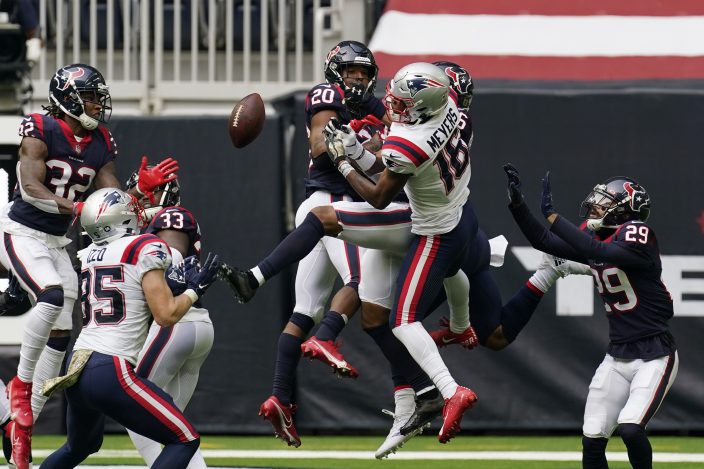 “It’s been must-win for us for the past three to four weeks,” safety Adrian Phillips said. “You can’t lose another one.”

The Patriots won six Super Bowls, nine AFC titles and 17 division championships after Tom Brady took over at quarterback in 2001. In many of those years, they coasted into the playoffs: Since they last missed the playoffs in 2008, their average margin in the division has been more than three games, and in none of those seasons has the division title been up for grabs in the final week.

Some of those years, coach Bill Belichick seemed ambivalent about winning down the stretch, treating those Christmastime games like the fourth week of the preseason. 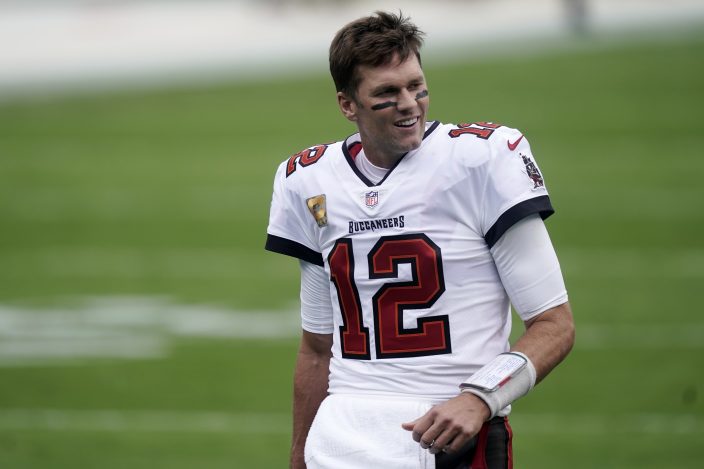 Tampa Bay Buccaneers quarterback Tom Brady (12) walks the turf before the first half of an NFL football game between the Carolina Panthers and the Tampa Bay Buccaneers, Sunday, Nov. 15, 2020, in Charlotte , N.C. (AP PhotoGerry Broome)

With Brady gone for Tampa Bay, we could be seeing that again this year.

Quarterback Cam Newton may have found a secondary receiver option in Damiere Byrd.

Byrd is in his first season with the Patriots, though he did play with Newton for three years in Carolina from 2016-18.

“You never know what game you’ll get called upon to get to do that, to be factor on the offense,” Byrd said. “Today was my lucky day and Cam trusted in me and we were able to make a few plays.”

Newton threw for 365 yards and a touchdown, completing 26 of 40 passes. (Fifty of those yards came on the final-play Hail Mary that only made it to the 12-yard line.)

Newton had four of his passes batted down by J.J. Watt on Sunday. According to SportRadar, Newton entered the week with the second-most passes batted down in the league — 10. That was tied with Kyler Murray, who is 5-foot-10; Newton is 6-foot-5.

He gave all the credit to Watt, a three-time Defensive Player of the Year.

“He’s J.J. Watt. What do you expect?" Newton said. "He’s an All-Pro, perennial All-Pro. He’s a Defensive Player of the Year, one of the best players in this generation.”

The Patriots' kicking game continues to be strong.

Placekicker Nick Folk was a perfect 4-for-4 — two field goals (45, 36 yards) and two extra points. He has not missed a field goal since a 51-yard attempt against Seattle in Week 2, a streak of 17 in a row. He missed a PAT last week in heavy rain and wind but has made 18 of 20 for the season.

Receiver and kick returner Gunner Olszewski fumbled one kickoff, which forced the Patriots to start one drive at their 17, and on another kickoff he stepped out of the back of the end zone before fielding the ball. That resulted in a touchback, which was actually a better outcome than the return because he didn't make it to the 25.

Running back Rex Burkhead sustained a knee injury and didn't return from Houston with the rest of the team. Belichick said he will be evaluated when he comes back. Burkhead needed to be helped off the field, taken to the locker room on a cart and quickly announced as out for the rest of the game, indicating that it was a serious injury. Tackle Isaiah Wynn, who was listed as questionable on the practice report with an ankle injury, left late in the game after another player rolled up on his ankle.

.500 — The Patriots haven't been below .500 on Thanksgiving since 2000, Belichick's first season in New England. This year's team has beaten three teams with winning records (Miami, Baltimore and Las Vegas) and has lost to three teams with losing records (Denver, San Francisco and Houston).

Newton was signed in June to plug in at quarterback after Brady ended his 19-year tenure with the team. The Patriots now have the rest of the season to decide whether to continue with the 2015 NFL MVP long term, turn the team over to Jarett Stidham, or find another option.

Asked whether he is interested in coming back in 2021, Newton said on his weekly radio show: “I have interest in winning the Arizona Cardinals game. How about that?”

“As the Bible says, ‘My cup runneth over’ with just trying to focus on the near future rather than the far future," he said.

The head of the Republican Nationa ...

Broken by Trump, US refugee program aims to return stro ...

Krish Vignarajah has been in survi ...

With playoffs unlikely, fading Patriots have questions at QB