The good news for the Green Bay Packers is that they still hold a two-game edge over Chicago Bears in the NFC North heading into their Sunday night showdown.

But that healthy lead can't cover up all this team's flaws.

The Packers (7-3) hardly looked like Super Bowl candidates while blowing a two-touchdown halftime lead in a 34-31 overtime loss at Indianapolis on Sunday. After racing to a 4-0 start, the Packers have split their past six games. 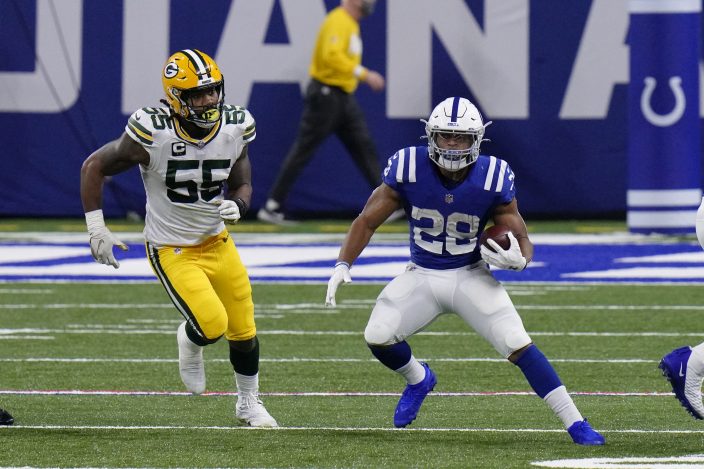 “We have to execute better in all three phases, and it’s got to be more consistent,” Packers coach Matt LaFleur said Monday.

The list of concerns for Green Bay starts with its run defense, the problem that stopped this team’s Super Bowl push last year. Green Bay allowed Indianapolis rookie running back Jonathan Taylor to rush for 72 of his 90 yards after halftime.

Green Bay's need for more overall consistency is exemplified by Marquez Valdes-Scantling, whose performance Sunday reflected the up-and-down nature of his career. 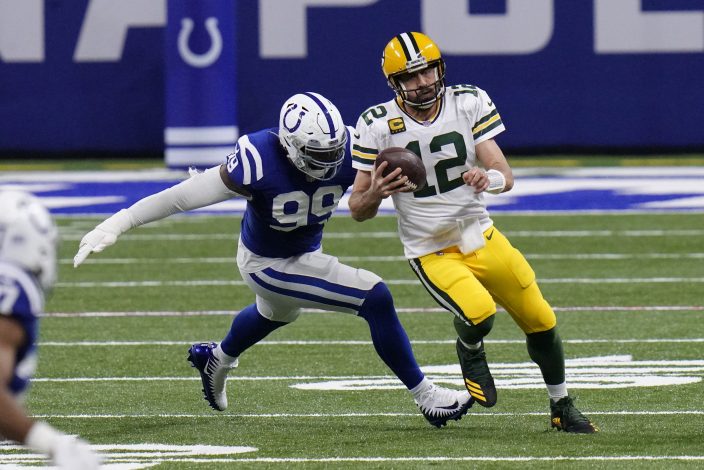 Valdes-Scantling drew a pass interference call late in the first half that resulted in a 51-yard gain that led to a touchdown. He made a 47-yard catch to set up the tying field goal. But it was his fumble in overtime that put Indianapolis in position for Rodrigo Blankenship’s winning field goal.

LaFleur and Aaron Rodgers both said after the game they have plenty of confidence in Valdes-Scantling. The third-year pro said Monday he appreciated the support he received from his teammates.

“That’s what brotherhood is all about,” Valdes-Scantling said. “No one’s ever going to be perfect, and obviously me taking it to heart with that costly mistake at the end of the game, it hurt. But I’ve got my brothers to support me, and that’s the family that matters.” 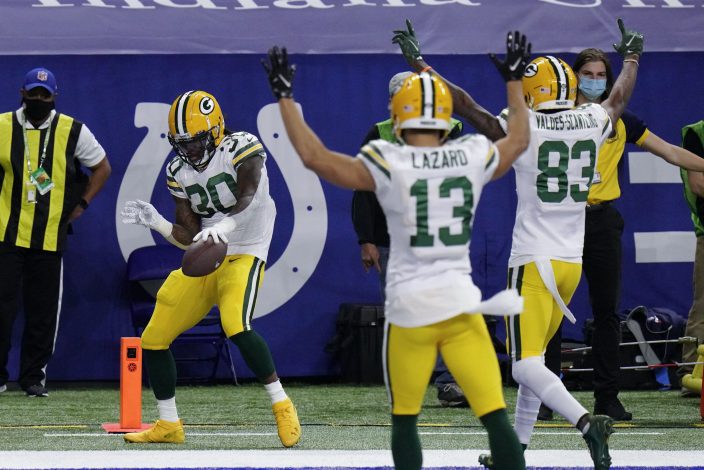 Green Bay Packers' Jamaal Williams (30) celebrates a touchdown during the first half of an NFL football game against the Indianapolis Colts, Sunday, Nov. 22, 2020, in Indianapolis. (AP PhotoAJ Mast)

Valdes-Scantling’s fumble was one of Green Bay’s season-high four turnovers Sunday. That comes after the Packers committed two second-half turnovers that led to 10 Jacksonville points in Green Bay’s 24-20 victory over the Jaguars a week earlier.

Green Bay also must perform better in short-yardage situations. The Packers failed to convert a third-and-1 and a fourth-and-1 on separate drives Sunday. They were stopped on third-and-1 while trying to run out the clock late in the fourth quarter against Jacksonville.

The Packers believe they can correct these problems. Rodgers said after the loss to the Colts that the game actually gave him plenty of confidence because of the energy the Packers showed in practice all week.

“I still feel really good about our chances and our squad,” Rodgers said. “This will be an important week, obviously, playing the second-place team in the division and giving us a chance to really put some cushion between us and the rest of the division with a win.”

The Packers’ two-minute offense was effective enough to enable them to score just before the end of the first half and the end of regulation. They got the ball at their 25-yard line with 1:52 left in the first half and reached the end zone with 16 seconds left. They began their last drive of regulation at their 6 with 1:25 remaining and moved into position for Mason Crosby’s tying 26-yard field goal with 3 seconds left.

The Packers must take better care of the ball after committing a season-high four turnovers Sunday. … They struggled on special teams, with Darrius Shepherd fumbling a kickoff return and JK Scott averaging just 39 yards per punt. … The Packers have gained 3.7 yards per carry or less in three straight games.

Defensive tackle Kenny Clark had six tackles and a sack and often worked his way into the backfield. … Crosby made both his field-goal attempts Sunday to improve to 13 of 13 this season. He is 35 of 36 on extra points.

Outside linebacker Preston Smith did have a tackle for loss but wasn’t much of a factor otherwise and got beaten on a Philip Rivers touchdown pass to Trey Burton. Smith has 1 ½ sacks this year after having 12 last season. … Aaron Jones scored his first touchdown since Oct. 18 but has just four 48 carries for 160 yards over his last four games. Jones ran for 374 yards on 65 attempts in his first four games.

Center Corey Linsley left with a back injury in the first half.

0 — Number of times the Packers have beaten the Colts in Indianapolis. Green Bay is now 0-5 in road games against the Colts since their move from Baltimore to Indianapolis.

The Packers prepare for Sunday night’s home game with Chicago, their first of two games with the second-place team in the NFC North.