Syracuse coach Dino Babers says he's focused on trying to remain positive late in this down season, and it's not an easy task in the aftermath of the Orange's sixth straight loss and word that one of the team's most renowned players of yesteryear has entered hospice.

“It’s going to be very hard. It is a test," Babers said Monday. "Just like the crucible is a test of wills, it’s a test, and it’s testing my faith. And I plan on winning the test by staying positive, knowing that there’s going to be a light at the end of the tunnel, that this is not all for naught.”

The Orange (1-8, 1-7 Atlantic Coast Conference) lost 30-0 at Louisville on Friday night and over the weekend the team learned that Hall of Famer Floyd Little had entered hospice in his struggle against cancer. 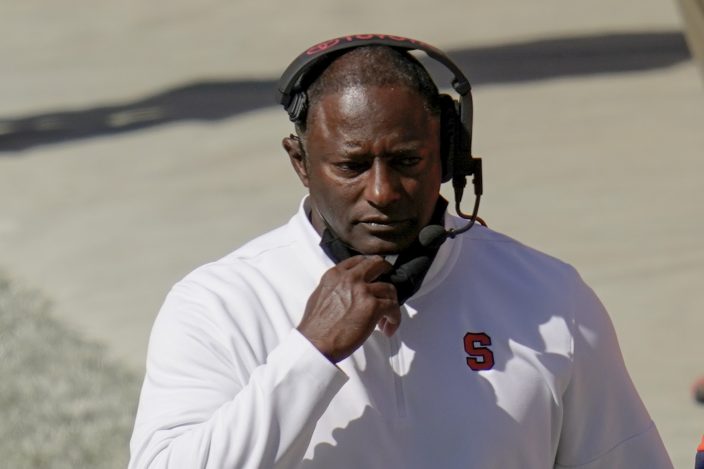 It's a blow to Babers and his family, who have developed a special bond with “Uncle Floyd.”

“Floyd’s always been like the bridge for me to the past at Syracuse," Babers said, his voice breaking. "He’s opened doors for me ... with the legacy that’s going to continue on. He’s a special guy.”

Little was an All-America tailback and kick returner for the Orange in the 1960s. He went on to star for the Denver Broncos for nine seasons and was inducted into the Pro Football Hall of Fame in 2010. He entered hospice on Saturday.

The Orange are coming off a most embarrassing loss. Syracuse was outgained 413-137 by Louisville with freshman quarterback JaCobian Morgan at the helm until he was knocked out of the game in the third quarter of his second start. Syracuse held the ball for just over 18 minutes, recorded only seven first downs, and converted one of 10 third downs. Morgan finished 5-of-12 passing for 40 yards with one interception before he was blindsided on a dropback and left the game. The lone bright spot offensively was freshman tailback Sean Tucker’s 93 rushing yards.

“We’re trying to win the football game," Babers said. "Football can be a dangerous game if people don’t know exactly what they’re doing. Not only do we want to evaluate people, but we want to put people in their best opportunity to be successful when they’re out there and be able to protect themselves.”

Babers said he expected to receive word on Morgan later in the day. He's the third Orange quarterback to get knocked out of a game this season, including redshirt junior starter Tommy DeVito, who suffered a lower-body injury against Duke in early October and has not played since.

“When you go back and look at the plays, out of the three plays that happened with quarterbacks, two of the quarterbacks could have prevented (the injuries) themselves,” Babers said. “It has to do with experience. JaCobian is young and he’s going to get bigger and stronger.”

Syracuse, which was in the vanguard for demanding three COVID-19 tests a week during the season, has two games left — Saturday at home against North Carolina State and the following week at No. 2 Notre Dame. The Orange have played all of their scheduled games on the dates they were originally slated, and Babers said his players should take pride in that.

“We didn’t have the Ws and Ls that we wanted, and I get that,” Babers said. "But I think that when you look at the people who have played and what they’ve sacrificed and putting that all in a basket and hopefully being able to come back in 2021 and have one hell of a picnic, I can see the light at the end of the tunnel. I really believe that this is all going to work out into a positive.”