Even as Taysom Hill produced amply in his triumphant first start, his job was made considerably easier by a defense that has allowed just one touchdown in three games.

The levels of depth and performance on both sides of the ball have given the Saints, winners of seven straight, the look of a team that is only getting stronger as the final stretch of the regular season arrives.

“We’ll be hard to beat if we’re able to play that way,” said Saints running back Latavius Murray, who contributed to a ground game that gained 168 yards in a 24-9 victory over Atlanta on Sunday. 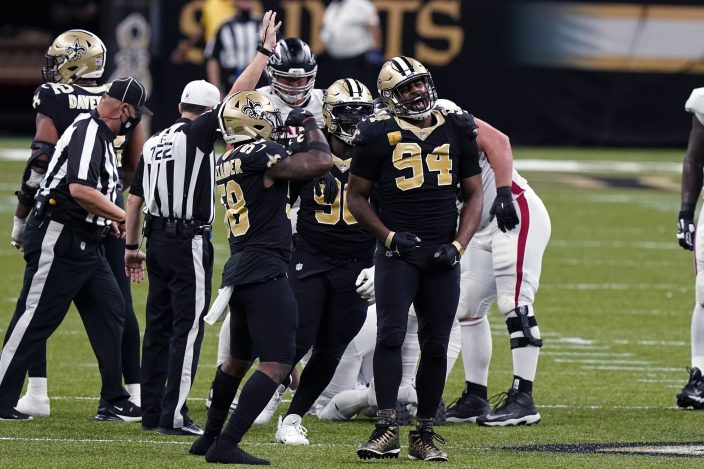 The 30-year-old Hill, now in his fourth NFL season out of BYU, was highly efficient and dynamic in his maiden start at quarterback. He completed 78.3% of his passes and did not throw an interception. He also rushed for a team-high 51 yards and two touchdowns.

That's the kind of production that might lead one to believe he'll retain the starting job as long as Drew Brees is sidelined with fractured ribs.

The 41-year-old Brees has to miss at least two more games after being placed on injured reserve last week. But Saints coach Sean Payton on Monday wasn't inclined to confirm Hill would continue to start over Jameis Winston, a 2015 top overall draft choice who started for most of his five seasons at Tampa Bay. 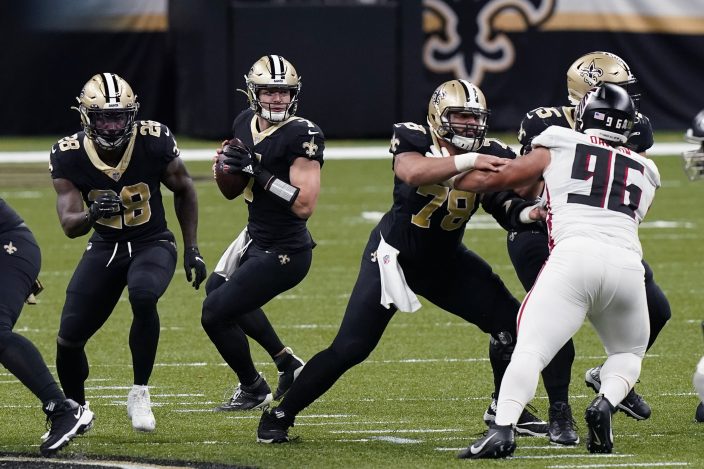 New Orleans Saints quarterback Taysom Hill (7) drops back to pass in the first half of an NFL football game against the Atlanta Falcons in New Orleans, Sunday, Nov. 22, 2020. (AP PhotoButch Dill)

“Look, we’re not making any big announcements. That’s not us," Payton said when asked about Hill's status as starter this week. "We thought he played well. There were a lot of things we did well in that game defensively. We won the field position battle. We won a number of situational battles. We ran the ball well, especially in the second half. It was a real good team win ... but outside of that, we’ll take each week with the approach of what’s best for our team.”

The Saints' defense, particularly the secondary, looked like a liability early this season, when coverage busts were common and New Orleans (8-2) began the season with losses in two of its first three games. But the Saints have not lost since, and the defense has come on strong lately, highlighted by an uptick in sacks and forced turnovers.

“It took us a while to get going, because we had to jell together, get that chemistry, know our goals, know our roles, just continue to play football and not focus on the outside because everybody knows how the season started,” Saints defensive back C.J. Gardner-Johnson said. "Everybody (outside of the locker room) started panicking for us and we were just like, we are going to get it going. You see it coming together in the past couple weeks and it is going well for us right now.” 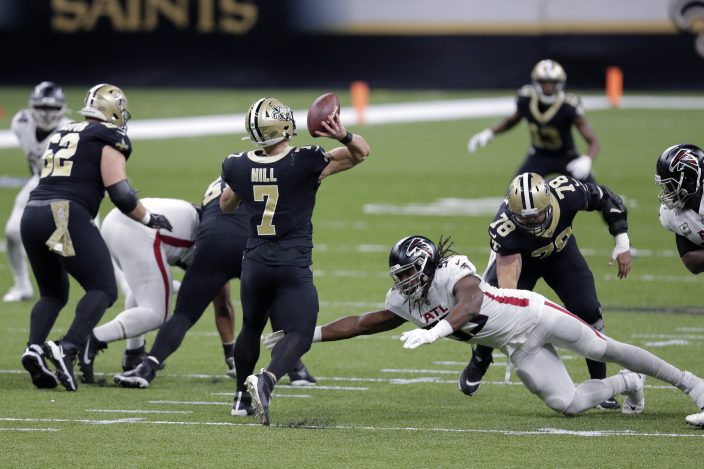 “These last couple games the defense has been striding in the right direction,” defensive end Cameron Jordan said. “The beautiful thing is there is room for us to grow.”

As well as the Saints are playing overall, their offense struggled somewhat on third downs Sunday. They converted just four of 11 and only one in the first half.

Hill is now much more than a change-of-pace option QB and utility player who dabbles in the receiving game as a tight end and helps out on special teams. He’s an increasingly credible candidate to contend for the starting quarterback job if Brees retires within the next year or two.

Winston didn’t get the start as conventional wisdom suggested he might. And the way Hill played raises the possibility that Winston won’t get much, if any, playing time while Brees remains out.

Left guard Andrus Peat is recovering this week from a concussion during Sunday’s game, while returner Deonte Harris hopes to come back from a stinger injury in the neck and shoulder area.

21 — The Saints’ average margin of victory in their previous three games, all won by double digits with no margin smaller than 14. The first four victories of their seven-game winning streak each were by six or fewer points, with three coming by three points and two in overtime.

The Saints visit Denver, where Hill should be well suited to handle the climate an altitude, considering he grew up in Idaho and played at BYU.