The Los Angeles Chargers proved on Sunday that they can finally hang on to a lead. The next step is making sure opponents don't make it too close at the end.

Los Angeles had a 31-13 lead midway through the third quarter against the Jets before New York was able to rally a bit. They were within one score at 34-26 and drove to the Chargers 32 with under a minute remaining before turning over the ball on downs.

The Chargers gave up a safety in the final seconds to make the final score 34-28 and snap a three-game losing streak to improve to 3-7. 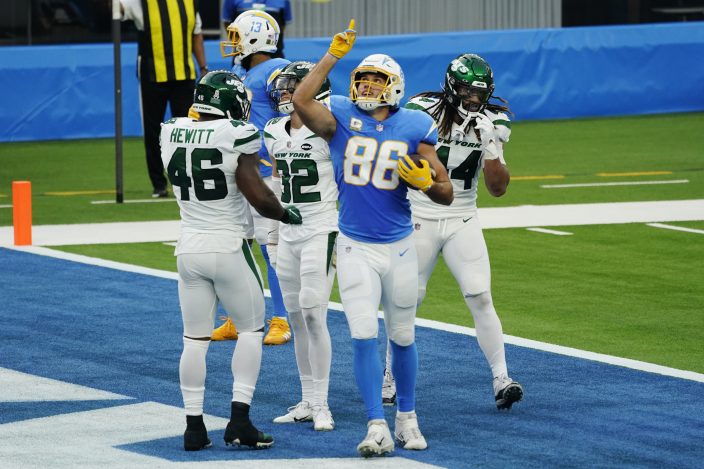 “Even though we didn’t finish the way we wanted to, we still won the game so it’s better than the alternative,” coach Anthony Lynn said.

The Chargers are one of the league's best teams in the first half. They have outscored teams by 40 points in the first and second quarters — the eighth-best differential in the league — and their defense has allowed a league-low average of 134.3 yards.

After halftime, though, is another story. The 164 points allowed in the second half and overtime is tied for second-most in the league and the minus-53 points differential is second to Atlanta (minus-58). The 209.7 yards allowed is fourth worst. Los Angeles Chargers cornerback Tevaughn Campbell runs into the end zone for a touchdown after intercepting the ball against the New York Jets during the first half of an NFL football game Sunday, Nov. 22, 2020, in Inglewood, Calif. (AP PhotoJae C. Hong)

New York had touchdowns on its first three second-half possessions and Joe Flacco had 173 of his 203 passing yards after halftime.

“They should have never had a chance to get back in the game. Simply shouldn’t have been that close, for sure,” said Keenan Allen, who set a franchise single-game record with 16 receptions. “It's not discouraging, but definitely embarrassing. Obviously, that’s a story of the whole season but even with a win, we will take it and try to build off of it.”

Chargers fans were hoping Justin Herbert's haircut last week didn't have a Samson-like effect. It didn't. Herbert passed for 366 yards and three touchdowns against a Jets defense that came into the game last against the pass. Herbert had 277 yards in the first half, which is the most in the first and second quarters by a rookie quarterback in at least 40 years.

Lynn made changes to the punt coverage unit, but it didn't help. Ty Long had a punt blocked for the third time in four weeks. In order to avoid having a punt blocked with 8 seconds left, Long ran into the end zone and took a 28-yard loss for a safety.

Tevaughn Campbell has improved his coverage skills over the past three games. It finally paid off against the Jets as he jumped on a route where Flacco was looking for Jamison Crowder and picked it off for a 6-yard, pick-6 and his first NFL interception.

Casey Hayward continues to get beat regularly on deep routes with Sunday's coming on a 49-yard heave from Flacco to Breshad Perriman.

“Casey has to play the ball better, he’s in position," Lynn said. "I’m sitting here watching some of these plays and he’s right there with his guy, but he’s not coming down with the ball and that’s something that we need to fix.”

Chargers: DE Uchenna Nwosu (shoulder) and Hayward (groin) are questionable for this week. Lynn did not have an update on LB Kyzir White. The team's leading tackler was placed on the reserve/COVID-19 list on Saturday.

81 — Receptions by Allen this season, which leads the league. He has an eight-reception lead over Buffalo's Stefon Diggs. Allen's 835 yards rank eighth.

The Chargers make their fourth and final trip to the Eastern time zone when they face the AFC East-leading Buffalo Bills (7-3). Los Angeles is 1-2 when it goes East this season, beating Cincinnati and losing to Tampa Bay and Miami.

A mother and her four daughters we ...

Nuggets run away from short-handed Heat, 109-82

Chargers' defense gets momentum with second half vs Falcons

Chargers frustrated after third straight loss has them 2-7

Chargers at a loss when it comes to explaining blown leads

Another blown lead has Chargers reeling going into bye week