When Kuwait emerged from a monthslong coronavirus lockdown, hundreds of Kuwaitis flocked to reopened stores, the lines clogging malls, snaking through hallways and spilling onto sidewalks.

But unlike much of the world, where long lines formed for donated food, Kuwaitis were waiting to buy Cartier jewelry.

The jewelry-store rush by Kuwait's long-coddled citizens is a symptom of a looming disaster. Kuwait, one of the world’s wealthiest countries, is facing a debt crisis. The pandemic has sent the price of oil crashing to all-time lows and pushed the petrostate toward a reckoning with its longtime largesse, just as a parliamentary election approaches in December. 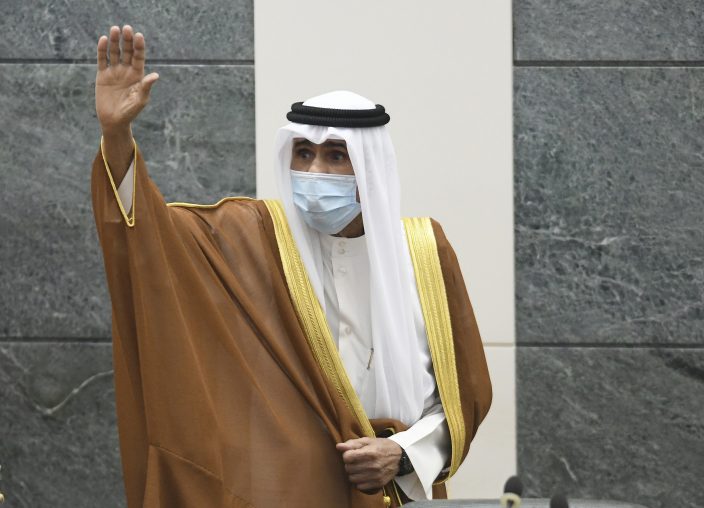 FILE - In this Sept. 30, 2020 file photo, the new Emir of Kuwait Sheikh Nawaf Al Ahmad Al Sabah, waves after he was sworn in at the Kuwaiti National Assembly. Kuwait, one of the world’s wealthiest countries, is facing a debt crisis as a parliamentary election looms in December. It needs the new parliament to approve raising its debt spending and passing the bill will be the first legislative challenge for the new emir. (AP PhotoJaber Abdulkhaleg, File)

“COVID, low oil prices and the liquidity crisis have all come together in a perfect storm,” said Bader al-Saif, an assistant professor of history at Kuwait University.

Like other Gulf sheikhdoms, Kuwait provides cushy jobs to roughly 90% of citizens on the public payroll, along with generous benefits and subsidies, from cheap electricity and gasoline to free health care and education.

This fall, the ratings agency Moody’s downgraded Kuwait for the first time in its history. The finance minister warned the government soon wouldn’t be able to pay salaries. Kuwait’s national bank said the country's deficit could hit 40% of its gross domestic product this year, the highest level since the financial devastation of the 1990 Iraqi invasion and subsequent Gulf War. 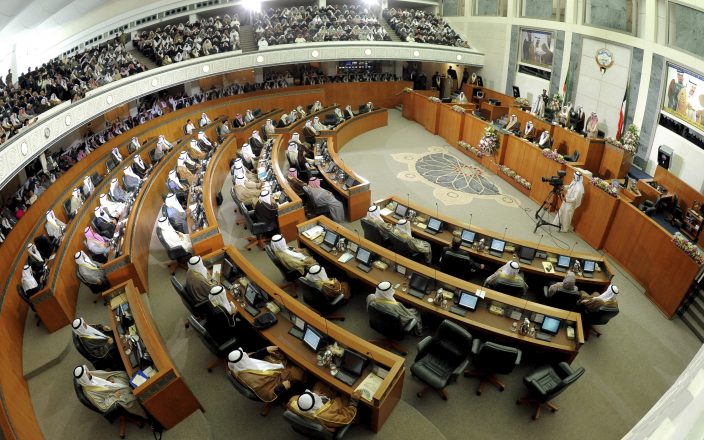 FILE - This Dec. 16, 2012 file photo shows a general view of Kuwait's National Assembly. Kuwait, one of the world’s wealthiest countries, is facing a debt crisis. The pandemic has sent the price of oil crashing to all-time lows and pushed Kuwait toward a reckoning with its longtime largesse for its citizens just as a parliamentary election looms in December 2020. (AP PhotoGustavo Ferrari, File)

With crude oil prices just above $40 a barrel, other nearby Arab states took on debt, trimmed subsidies or introduced taxes to sustain their spending. Kuwait, however, did none of that. Its break-even price for this year's budget was $86 a barrel, double current sales figures, putting its finances under strain.

That's not to say Kuwait will be begging for aid at international summits any time soon. The Kuwait Investment Authority holds assets of $533 billion, according to the Las Vegas-based Sovereign Wealth Fund Institute, making it the world's fourth-largest such fund.

The problem is Kuwait has no legal framework to deficit-spend beyond its current limit of $33 billion. It needs the country's strong and rambunctious 50-seat parliament — a rarity among Arab sheikhdoms — to grant approval.

A long-awaited public debt bill would allow Kuwait to borrow up to $65 billion and relieve the crisis. But drumming up billions for the government remains a thorny issue in a country rocked by high-profile corruption scandals. Public suspicion of government graft and mismanagement is growing alongside Kuwait’s liquidity crisis.

Passing the bill will be the first legislative challenge for Kuwait's new emir, Sheikh Nawaf Al Ahmad Al Sabah. Sheikh Nawaf ascended the throne in September following the death of the 91-year-old Sheikh Sabah Al Ahmad Al Sabah, a seasoned diplomat who over 14 years made his tiny state a respected regional mediator.

Incoming lawmakers after Kuwait’s Dec. 5 election will decide the public debt bill’s fate, and it won't be an easy sell.

“The whole system is corrupt,” said Omar al-Tabtabaee, an independent lawmaker running for reelection. “There’s corruption in our projects, in how they choose civil servants. No Kuwaiti is happy about our situation.”

Earlier this year, al-Tabtabaee rejected a plan to raise Kuwait’s debt ceiling, along with a majority of lawmakers who feared the fresh revenue would line the pockets of wealthy merchants and foreign banks.

“People have lost their trust in the government,” said Mohammed al-Yousef, an independent Kuwaiti political analyst. “There have been so many scandals and not one minister is in prison.”

The scandals include a scheme that looted billions of dollars from a Malaysian sovereign wealth fund, ensnaring a member of Kuwait’s ruling family. Another smuggled Bangladeshi laborers into the country with the alleged help of lawmakers. Last year, the Cabinet resigned over accusations that hundreds of millions of dollars were missing from a military fund.

Now ministers are struggling to convince an increasingly resentful public. The former finance minister, Mariam al-Aqeel, left her post in February after coming under fire for suggesting the government close its deficit by taxing citizens and cutting salaries. Six Finance Ministry officials resigned last month in what was seen as a bid to drive out the current minister, who has pushed hard for the debt law.

The resistance stems from Kuwait’s decades-old social contract. Scaling back the bloated welfare state alters a system in which cradle-to-grave benefits buy loyalty — a recipe for unrest without concessions from the top.

“Kuwaitis think, why would I contribute my own money if the government isn’t holding anyone accountable? If I can’t see where their money is going?” said Barrak Algharabally, an expert in government budgeting at Kuwait University.

As Kuwait quarrels, available cash is dwindling. For the first time in history, oil revenues won’t cover salaries and subsidies, which have swelled since 2006 and now eat up more than 70% of the national budget. At current oil prices and spending levels, the general reserve fund will dry up by December, said Raghu Mandagolathur, research director at the Kuwait Financial Center, an investment bank.

Even when the virus recedes, oil prices aren't expected to soar to 2014 peaks of over $100 a barrel. Experts say the pandemic has given Kuwait a glimpse of the future, jolting the country out of the assumption it can live beyond its means forever. But whether the shock will force much-needed reforms remains to be seen.

“We’ll have fun for the next 10, 20 years, but what’s next?” asked Algharabally, the budgeting expert. “What will happen to our sons and grandsons?”

Bulls C Carter to miss at least a month with quad injur ...