The Tom Brady-led Tampa Bay Buccaneers are currently the sixth seed in the NFC and remain a good bet to make the playoffs as a wild card. They've struggled to play their best football against the NFL’s top teams, though.

The Bucs came up short again in a 27-24 loss to the Los Angeles Rams on Monday night. They've dropped two straight at home, and it won't get any easier next Sunday when defending Super Bowl champion Kansas City visits Raymond James Stadium.

“We felt the energy,” safety Jordan Whitehead said. “We knew this was a game we needed to win. It’s hard to lose. We’ve got another tough one next week. We have to fight for this. Nobody is quitting.” 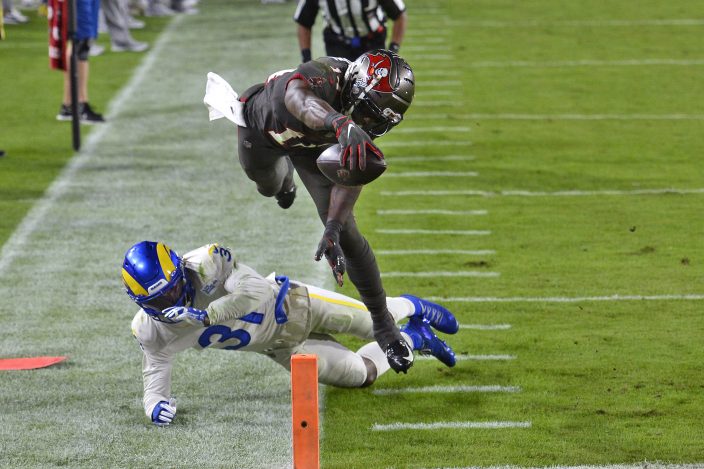 Tampa Bay Buccaneers wide receiver Chris Godwin (14) reaches for the goal line after leaping over Los Angeles Rams defensive back Darious Williams (31) for a touchdown during the second half of an NFL football game Monday, Nov. 23, 2020, in Tampa, Fla. (AP PhotoJason Behnken)

Of the Bucs’ seven wins this season, only two have come against teams with winning records. They lost twice by double digits to NFC South leader New Orleans and sit 1 1/2 games behind the Saints with five games left in the regular season.

“Our mentality is that every game is a playoff game right now,” defensive lineman Will Gholston said.

Rams quarterback Jared Goff had his way with Tampa Bay's defense in the first half, going 21 of 25 for 212 yards and two touchdowns. The unit tightened up in the second half and got interceptions from Whitehead and Jason Pierre-Paul, but failed to keep the Rams from getting the go-ahead field goal with 2:36 remaining.

“They were completing passes on third down,” Whitehead said. “Goff did a good job attacking. We let them get three late in the game and we needed to shut them down there.”

On offense, the Buccaneers failed to hit on deep passes and did not have a completion longer than 18 yards. Both of Brady’s interceptions came on misfired throws down the field.

“They did a good job preventing (the big play),” Brady said. “They play a defense that makes them tough to hit. Not impossible, but we didn’t hit any. I have to do a better job.”

Things don't get any easier with the Chiefs (9-1) up next.

“It’s very slim,” Arians said. “This game was a big one and the next one is even bigger.”

The Bucs have missed the playoffs for 12 consecutive seasons, the second-longest active drought in the NFL.