Green Bay Packers wide receiver Marquez Valdes-Scantling wants to make sure his costly fumble in an overtime loss to Indianapolis doesn't ruin the breakthrough season he's been putting together.

The third-year pro will try to bounce back Sunday night when the NFC North-leading Packers (7-3) host the Chicago Bears (5-5).

“Mistakes don’t define you,” Valdes-Scantling said Monday. “People can’t define who you are. There’s only one judge and that’s the man up top.” 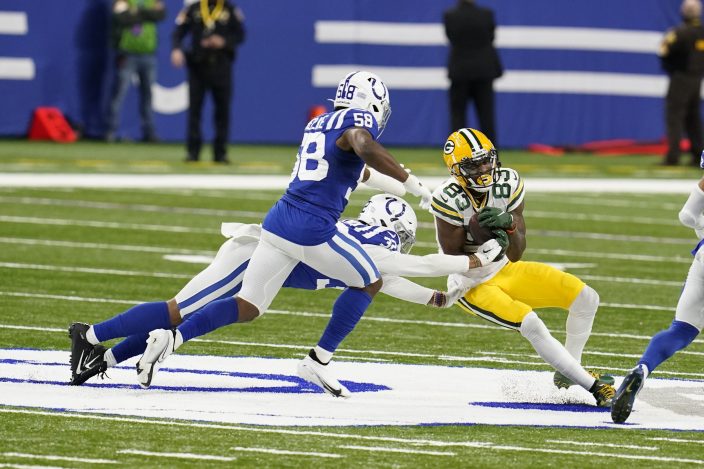 Valdes-Scantling says he received some death threats on social media Sunday after his fumble led to the Colts' game-deciding field goal in Green Bay's 34-31 loss. Valdes-Scantling had been having a productive game until that turnover.

“Social media gives cowards the right to say whatever they want with no consequences,” Valdes-Scantling said. “I guess that’s one of those things, with the profession that we’re in, you’ve got to take it for what it is, don’t let it affect you. It doesn’t affect me. People can say whatever they want. As long as people in this building and in my family, they all care about me, that’s all that matters.”

Valdes-Scantling had caught a pass behind the line of scrimmage and was trying to head upfield in overtime when the Colts' Julian Blackmon knocked the ball loose and DeForest Buckner recovered the fumble at Green Bay’s 29-yard line.

Valdes-Scantling sent out a tweet Sunday night in which he referenced the death threats. In his tweet, Valdes-Scantling called the tweets “sick” and added that “I’m good. My team got my back.”

“Obviously I wasn’t fearful of my life or anything,” Valdes-Scantling said. “That’s never the case. It was more so the fact that to get people to understand that we’re humans, too, we’re not just some number on a jersey, that we’re people first.”

Valdes-Scantling’s performance reflected a career that already has featured plenty of highs and lows. The 2018 fifth-round pick from South Florida has emerged as the Packers’ main deep threat, but has struggled to gain consistency.

Green Bay coach Matt LaFleur noted that the Packers wouldn’t have been in position to win Sunday's game without Valdes-Scantling’s contributions. Valdes-Scantling caught a 47-yard pass on a third-and-10 play that helped set up Mason Crosby’s game-tying 26-yard field goal with 3 seconds left in regulation. He also drew a pass interference penalty that resulted in a 51-yard gain on a touchdown drive late in the first half.

“I have a lot of love for Marquez,” quarterback Aaron Rodgers said. “I see the guy every single day, see how much he cares about it. it happens, unfortunately. A lot of it is fundamentals carrying the ball, but I’ve had my fair share of fumbles. It was just bad timing, obviously.”

The fumble overshadowed the progress Valdes-Scantling has made this year.

Valdes-Scantling has caught 25 passes for 518 yards through 10 games this year after having just 26 catches for 452 yards all of 2019. His four touchdown receptions this year match his career total heading into the season.

In the game preceding Green Bay's trip to Indianapolis, Valdes-Scantling helped the Packers beat Jacksonville 24-20 by catching four passes for a career-high 149 yards, including a 78-yard touchdown.

“I just think he’s playing with a lot more confidence,” LaFleur said. “He’s more decisive. I see him catching the ball with strong hands. He’s had his moments, just like everybody has. That’s football.

“This is a tough game for tough-minded men, and you have to be mentally strong. And I think that’s where he’s improved the most is, you know, despite maybe having a bad play he’s able to bounce back, and I would expect nothing other than that moving forward from him.”