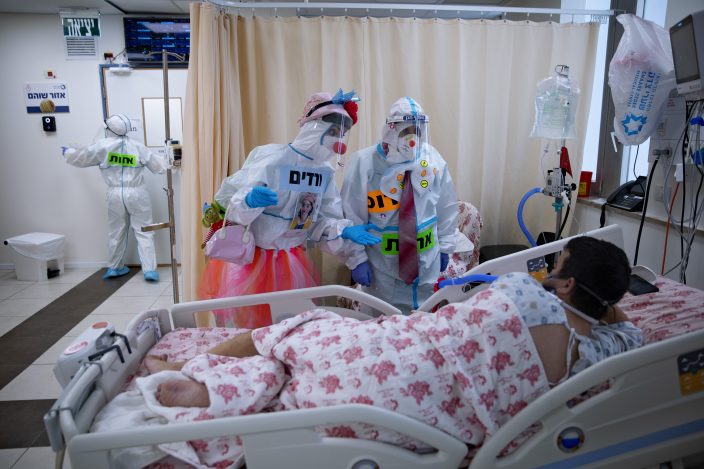 VIRUS-OUTBREAK-SPAIN’S-BODY-COLLECTORS — With the resurgence of the coronavirus in Spain, mortuary workers have returned to making the rounds of hospitals, nursing homes and other facilities. Like doctors and nurses, they are part of a group of essential workers who see and touch the daily march of death amid the worst public health crisis in over a century. By Emilio Morenatti. SENT: 880 words, photos. 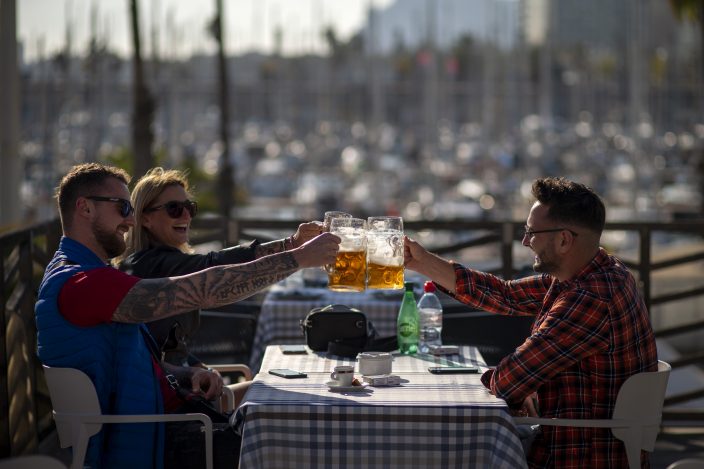 Tourists toast on a bar terrace just reopened to customers in Barcelona, Spain, Monday, Nov. 23, 2020. Restaurants and bars in Barcelona and the surrounding Catalonia region of northeastern Spain are reopening for business on Monday after being ordered shut for 40 days to stem an increase in coronavirus cases. (AP PhotoEmilio Morenatti) 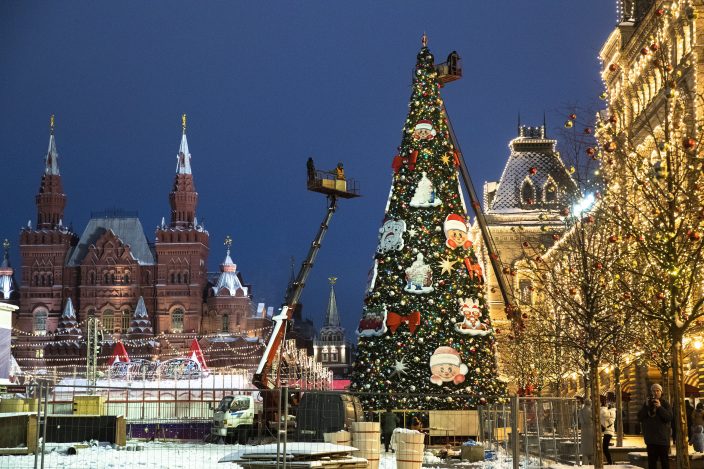 Municipal workers on cranes set up a Christmas tree in Red Square, with the Historical Museum, left, and the GUM State Department store, right, in the background, in Moscow, Russia, Monday, Nov. 23, 2020. Daily new coronavirus infections in Russia hit a new high on Monday, with authorities reporting a record 25,173 new cases. The latest figure brings the country's total to over 2.1 million. (AP PhotoPavel Golovkin)

BIDEN — Biden is set to formally introduce his national security team to the nation, building out a team of Obama administration alumni that signals his shift away from the Trump administration’s “America First” policies and a return to U.S. engagement on the global stage. By Diplomatic Writer Matthew Lee. SENT: 770 words, photos.

VIRUS OUTBREAK-HOLIDAY RESTRICTIONS — Governors and mayors are ratcheting up mask mandates and imposing restrictions on small indoor gatherings, which have been blamed for accelerating the spread of the coronavirus. Experts say that if people disregard the new state and local restrictions and socialize anyway, that could put greater stress on overburdened hospitals and lead to an even bigger spike in sickness and death over the holidays. By Michael Rubinkam. SENT: 1,110 words, photos.

VIRUS-OUTBREAK-THE-SELF-CARE-SURGE — The pandemic has forced people to spend more time with themselves than ever. Along the way, it has reshaped and broadened the way many think about how they treat themselves — what has come to be called self-care. For many, it has put the purpose and meaning of life front and center, reconfiguring priorities and needs. This new way of thinking has many impacts, including producing new trends in the beauty and clothing industries. By Anne D’Innocenzio and Sophia Rosenbaum. SENT: 1,260 words, photos. 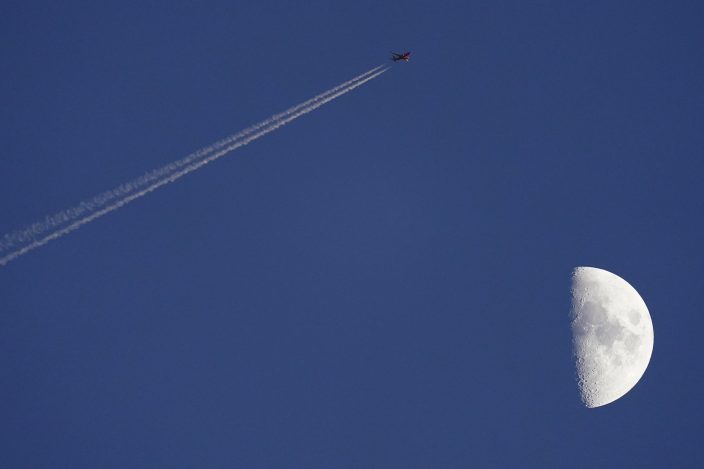 A Southwest Airlines passenger jet crosses the sky above Kansas City, Kan., as the moon looms in the distance, Sunday, Nov. 22, 2020. With the coronavirus surging out of control, the nation's top public health agency pleaded with Americans not to travel for Thanksgiving and not to spend the holiday with people from outside their household. (AP PhotoCharlie Riedel)

CHINA-SPACE GOALS — China’s latest trip to the moon is another milestone in the Asian powerhouse’s slow but steady ascent to the stars. China became the third country to put a person into orbit a generation ago and the first to land on the far side of the moon in 2019. Future ambitions include a permanent space station and putting people back on the moon more than 50 years after the U.S. did. By Sam McNeil. SENT: 700 words, photos, video.

OBIT-DAVID-DINKINS — David Dinkins, who broke barriers as New York City’s first African-American mayor, but was doomed to a single term by a soaring murder rate, stubborn unemployment and his mishandling of a riot in Brooklyn, has died. He was 93. By Deepti Hajela. SENT: 1,210 words, photos.

Lemlem Haylo Rada, 25, who fled the conflict in Ethiopia's Tigray region, holds her one-month old baby in front of her shelter, at Um Rakuba refugee camp in Qadarif, eastern Sudan, Monday, Nov. 23, 2020. Ethiopia's government is again warning residents of the besieged capital of the embattled Tigray region as the clock ticks on a 72-hour ultimatum before a military assault, saying "anything can happen." (AP PhotoNariman El-Mofty) 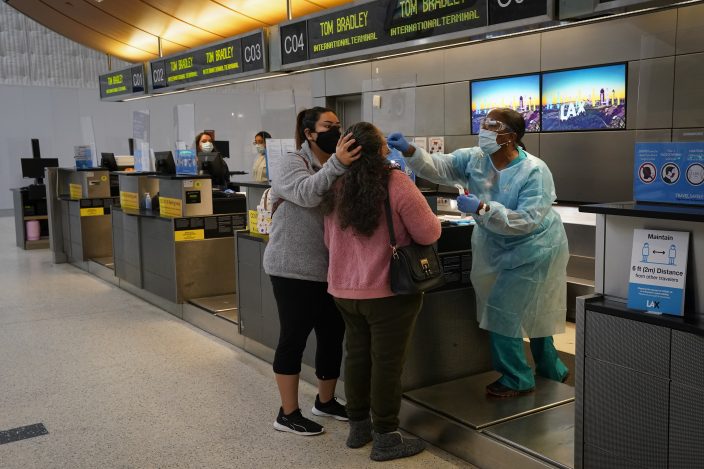 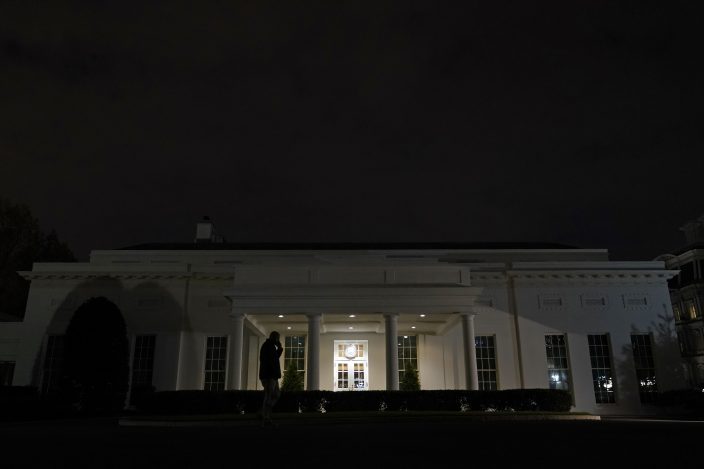 VIRUS OUTBREAK — About 1 million Americans a day packed airports and planes over the weekend even as coronavirus deaths surged across the U.S. and public health experts begged people to stay home and avoid big Thanksgiving gatherings. By Business Writers Dee-Ann Durbin and David Koenig. SENT: 1,020 words, photos. With VIRUS-OUTBREAK-THE-LATEST.

VIRUS OUTBREAK-CALIFORNIA — Officials in the nation’s largest county will discuss a possible stay-home order just days before Thanksgiving after a spike of coronavirus cases surpassed a threshold set by Los Angeles public health officials to trigger one. SENT: 1,050 words, photos. 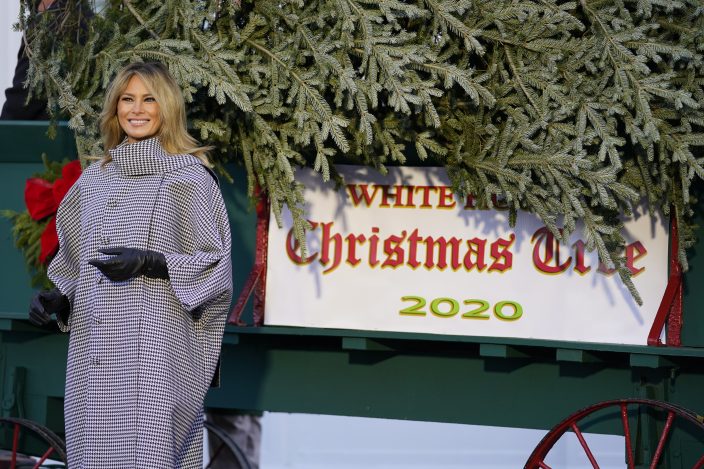 First lady Melania Trump stands next to the 2020 official White House Christmas tree after it arrived at the White House in Washington, Monday, Nov. 23, 2020. This year's tree is an 18.5-foot Fraser Fir, selected and cut from Dan and Bryan Trees in Shepherdstown, W.Va. (AP PhotoAndrew Harnik)

VIRUS-OUTBREAK-VIRAL-QUESTIONS-DINING-TENTS — Outdoor dining tents are popping up outside restaurants during the pandemic, but experts say not all setups are equal. SENT: 310 words, graphic.

VIRUS-OUTBREAK-ASIA — China reported two new coronavirus cases in the cities of Shanghai and Tianjin as it seeks to prevent small outbreaks from becoming larger ones. SENT: 400 words, photos. 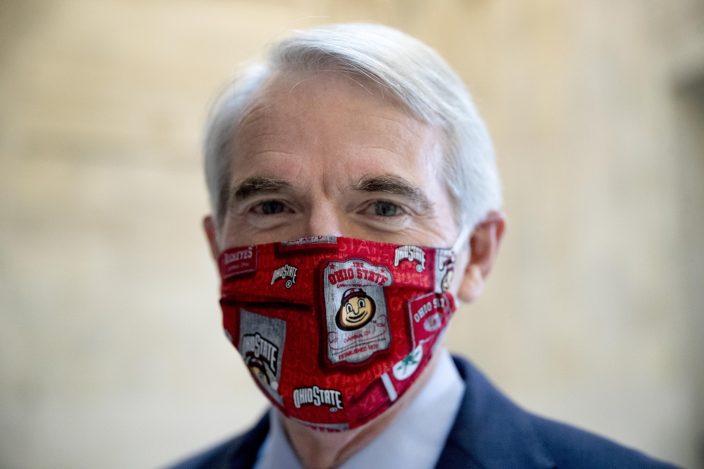 FILE - In this file photo from May 20, 2020, Sen. Rob Portman, R-Ohio, wears an Ohio State University mask as the Senate Homeland Security and Governmental Affairs committee meets on Capitol Hill in Washington. Pressure is increasing on a Trump administration official to authorize a formal transition process for President-elect Joe Biden. Portman of Ohio on Monday, Nov. 23, called for the head of the General Services Administration to release money and staffing needed for the transition. (AP PhotoAndrew Harnik, File) 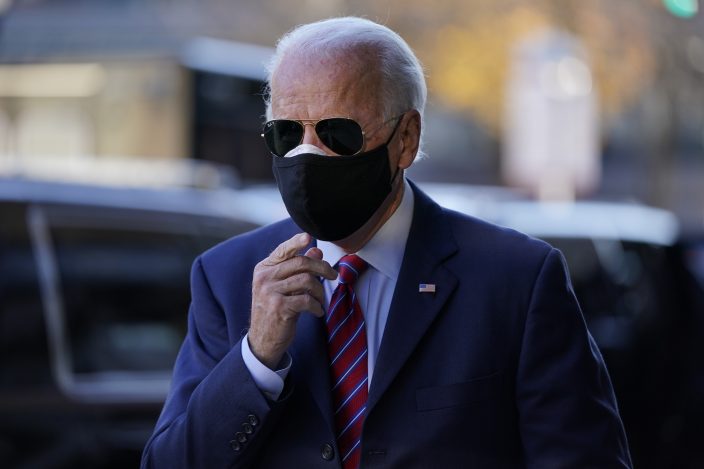 President-elect Joe Biden walks from his motorcade to speak to members of the media Monday, Nov. 23, 2020, in Wilmington, Del. (AP PhotoCarolyn Kaster)

JAPAN-CHINA — China’s foreign minister arrives in Japan to meet with his Japanese counterpart and discuss ways to revive their pandemic-hit economies as well as regional concerns over China’s growing influence. SENT: 330 words, photo.

COLOMBIA-PRISONER DEATHS — New evidence indicates most of the 24 inmates killed during a prison riot in Colombia’s capital earlier this year over fears that crowded, unhygienic conditions would fuel a virus outbreak were shot to death intentionally, according to a report released by Human Rights Watch. SENT: 500 words.

TAIWAN-SUBMARINES — Taiwan’s president inaugurated the production of domestically made submarines in the southern city of Kaohsiung, in a step forward for the island’s defense strategy at a time of elevated tensions with China. SENT: 770 words, photos.

BIDEN-TREASURY SECRETARY — Janet Yellen is in line for another top economic policy job — just in time to confront yet another crisis. SENT: 1,190 words, photo.

FINANCIAL-MARKETS — Asian shares were mostly higher, encouraged by news on the development of coronavirus vaccines and more assurance for a transition of power in the U.S. to Biden. By Business Writer Yuri Kageyama. SENT: 720 words, photos.

NETFLIX-PRODUCTION-INVESTMENT — Netflix plans to establish one of the largest production hubs in North America with an expansion of its existing studio complex in New Mexico and a commitment to an additional $1 billion in production spending. SENT: 510 words, photo.

RAMS-BUCCANEERS — Jared Goff threw for 376 yards and three touchdowns, and Matt Gay kicked a 40-yard field goal with 2:36 remaining to give the Los Angeles Rams a 27-24 victory over the Tampa Bay Buccaneers. By Sports Writer Fred Goodall. SENT: 940 words, photos.