“Parting is such sweet sorrow” — especially for a theater troupe hoping to stage a live performance of “Romeo & Juliet” in the middle of a pandemic that has closed schools and required social distancing.

The solution, at least for high school students in the Boston suburb of Westwood? Make a movie version instead.

This fall, the Westwood Stage cast has been recording themselves reciting lines from William Shakespeare's timeless story of star-crossed lovers. The audio tracks will then be set to images from a graphic novel version of the play. 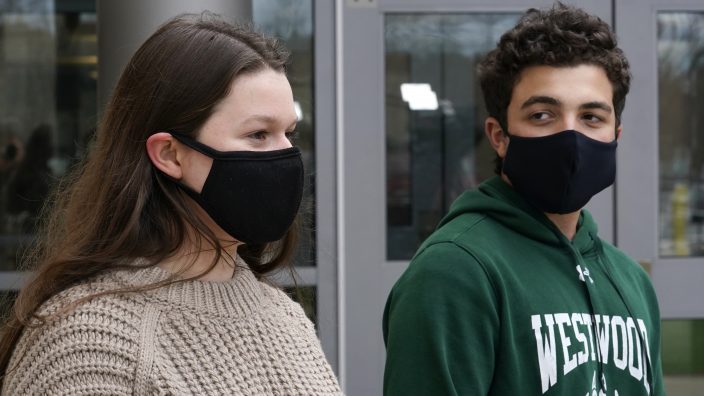 While wearing protective masks due to the COVID-19 outbreak, Lucy Vitali, who portrays Juliet, left, stands with Alex Mansour, who portrays Romeo, outside the auditorium after working on their virtual performance of Shakespeare's "Romeo and Juliet," at Westwood, Mass. High School, Monday, Nov. 16, 2020, in Westwood. The production, which would usually be presented onstage, shifted to a virtual audience due to the pandemic. (AP PhotoCharles Krupa)

Producing an animated film meant students didn’t have to worry about memorizing lines, costume changes or many of the other things that go into a live theatrical performance.

But it was still an interesting challenge to focus almost completely on their voice work, said Lucy Vitali, a 16-year-old junior who plays Juliet.

“This was definitely a good one to do Shakespeare for,” agreed Ryan Kaplan, a 15-year-old sophomore who plays the friar. “The focus is much more on the words and the terminology, which is what Shakespeare is all about.” 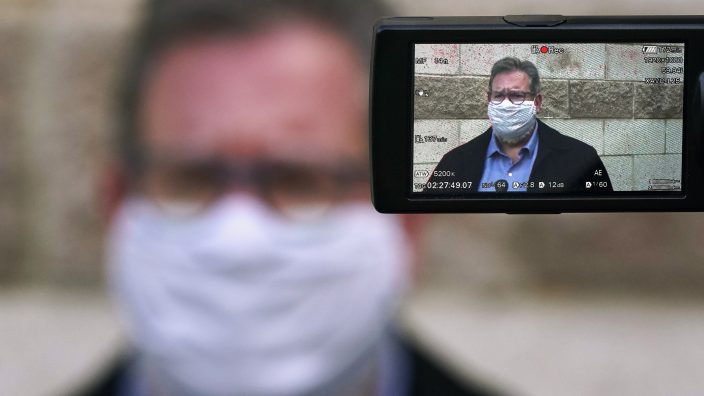 While wearing protective mask due to the COVID-19 outbreak, Jim Howard, a drama teacher at Westwood, Mass., High School, is interviewed outside the school's auditorium after working with students on a virtual performance of Shakespeare's "Romeo and Juliet," at Westwood, Mass. High School, Monday, Nov. 16, 2020, in Westwood. The production, which would usually be presented onstage, shifted to a virtual audience due to the pandemic. (AP PhotoCharles Krupa)

For Cassidy Hall, a 17-year-old senior who plays the nurse, the chance to remain active in theater, even in a modest way, has been a welcome dose of normalcy. She’s among the students who have opted to study at home rather than attend in-person classes this year, so her interaction with peers has been limited.

“It’s something I really look forward to,” she said. “Just to be able to rehearse with everyone.”

Cast members said there was never any doubt they’d find a way to perform this fall. After all, their musical production of “The Addams Family” last spring was canceled following its opening night performance because the state shuttered schools, businesses and many other institutions for weeks during the initial wave of the virus. 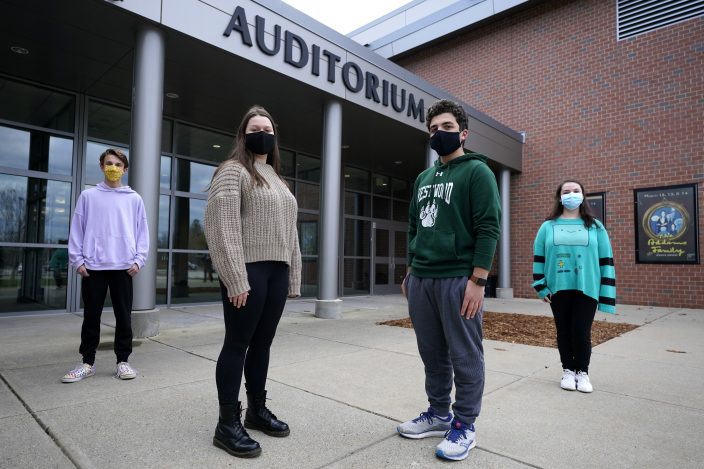 While wearing protective masks due to the COVID-19 outbreak, Lucy Vitali, who portrays Juliet, second from left, poses with Alex Mansour, who portrays Romeo, second from right, outside an auditorium after working on their virtual performance of Shakespeare's "Romeo and Juliet," at Westwood, Mass. High School, Monday, Nov. 16, 2020, in Westwood. The production, which would usually be presented onstage, shifted to a virtual audience due to the pandemic. With the duo are Ryan Kaplan, who portrays the friar, left, and Cassidy Hall, who portrays the nurse, right. (AP PhotoCharles Krupa)

Jim Howard, the school’s drama teacher, said he turned to the animated film idea after it became clear that performing the play live wouldn’t be possible under the state’s current guidelines, which require 6 feet (two meters) of separation between performers.

“How do you do Romeo and Juliet at 6 feet?” he said. “It’s a love story. They dance. There’s fighting. There’s a lot of physical interaction.”

Howard said he found an illustrated version of the play by Classical Comics, a British imprint, while searching online, and the creators readily agreed to let the students use the images for their project.

Over the last few months, the cast has spent three days a week rehearsing their lines and getting acclimated to the quirks of the Bard's English before laying down audio tracks in the school’s closet-sized, soundproof music rehearsal rooms.

They wrapped up recording last week, but not before a small setback: The school was forced to close for in-person classes recently after some students — none in the cast — contracted COVID-19.

Howard said he’ll now send the best of the audio tracks to a technician who will merge them with the comic book images. He expects the finished product will run about an hour long and be ready sometime next month.

Since a proper premiere isn’t possible under pandemic restrictions, the cast of 20 is planning to gather in the school’s auditorium for a viewing. The film will also be posted on the troupe's website, where Howard hopes it can replicate some of the joy and community of live theater.

“There's a great opportunity, at a time that is so difficult, to have some pride in our town and smile a little,” he said. “Because we all need that. Even if it's behind our masks."

“One Good Thing” is a series that highlights individuals whose actions provide glimmers of joy in hard times — stories of people who find a way to make a difference, no matter how small. Read the collection of stories at https://apnews.com/hub/one-good-thing.