They may be one of Hollywood’s most beloved couples, but Kurt Russell and Goldie Hawn have never felt the pressure to use that unmatched chemistry for the big screen time and time again. Since 1987's “Overboard," they’ve received hundreds of opportunities to reunite in a film. Although none seemed quite right until another longtime, A-list pair landed at their feet: Santa and Mrs. Claus.

The film is “The Christmas Chronicles: Part Two,” a sequel to the 2018 Netflix picture that introduced Russell as a Santa who's more superhero-meets-Elvis speedracing his sled than jolly old Saint Nick sitting by a fire. At the urging of Chris Columbus, who produced the first, Hawn appeared as Mrs. Claus in a cameo at the end.

“When Goldie appeared on screen, she brought the house down,” said Columbus, who stepped up to direct this one. “We knew we had to do the next one with Goldie, if she would do it, if she would have us.” 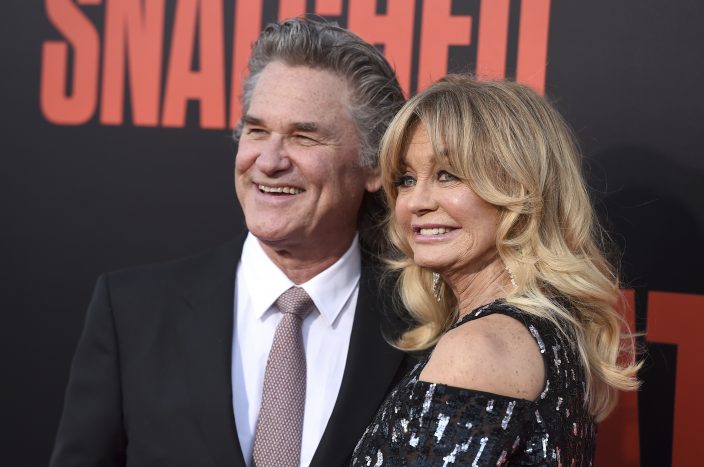 FILE - Kurt Russell, left, and Goldie Hawn appear at the premiere of Hawn's film, "Snatched" in Los Angeles on May 10, 2017. Russell and Hawn star in the holiday film "The Christmas Chronicles: Part Two," premiering Friday on Netflix. (Photo by Jordan StraussInvisionAP, File)

It debuts on Netflix on Wednesday right in time for Thanksgiving. And, unsurprisingly, the Clauses have never looked better.

This wasn’t some slapdash, stunt Christmas cash grab, either. It was born of a genuine love of the holiday and became a deeply personal endeavor for all three.

Christmas was big in the Russell and Columbus houses growing up. Columbus even said he was downright obsessed, although he hated the aluminum tree that his mother used.

He had previously set “Gremlins,” which he wrote, and “Home Alone” at Christmastime, but both of those were kind of horror films in different ways — one a horror comedy and the other a horrific situation. In his mind, he’d never made a real Christmas movie, most of which he considers pretty bad. This was chance to unapologetically lean into the yuletide spirit.

He and Russell worked on the script for months going deep into character questions about where Santa comes from, how he met Mrs. Claus, how long have they been together and what is their relationship like. Russell even composed a 200-page “bible” as backstory.

“Kurt approached this like any actor approaching a great role, which is rare for Santa Claus, if we’re being honest. It's only been played well a couple of times," Columbus said. “And this is the great one right here.”

That seriousness extended to Mrs. Claus, who they crafted into a pillar of strength and love. Hawn wanted to ensure that she did more than bake cookies too.

“There was no Mrs. Claus we could really identify with. She was a character that was iconic for no other reason than she was the wife of Santa,” Hawn said. “I thought, I don’t want to be the one that continues to bring him his slippers. I mean, it’s just not the way women are today.”

She was tempted to bring her classic playfulness to the role, but Columbus encouraged her to make this Mrs. Claus a little more grounded.

Hawn, who just turned 75 this weekend, is deeply sincere when she says she loves this film and this character. In fact, she took a souvenir from set and plans to hang it in her Aspen house, which she said she’s redoing to make it look like Santa’s Village.

Russell can't help but think of his late father Bing Russell, who loved Christmas deeply and helped make the holiday a major event in their household.

“I dedicate these to my dad,” Russell said.

He’s also excited that their six grandchildren will be able to watch the film and maybe even earn some bragging rights among their peers.

“I like the idea that there’s a period of time when those kids can go to school and say, well, my grandmother and grandfather are Mrs. Claus and Santa,” Russell said, beaming. “OK, so top that!”

Each film in the Hawn and Russell oeuvre has come at distinctly different phases for the couple. On 1968’s “The One and Only, Genuine, Original Family Band” they were strangers, on 1984’s “Swing Shift,” they were falling in love and on 1987’s “Overboard” they were becoming a family. Over three decades later, Hawn reflected on where they are now.

“This is an interesting phase because there is so much love and history and all the ups and downs of a relationship, and now we’re looking at our grandchildren and these are sort of the special years. And we are looking at fun things to do together, whereas before we were more pulled away by different things,” Hawn said. “It’s a time of friendship, really. I mean, there’s love, but also friendship is very important as you get older: The trust in each other, supporting each other, being there for each other and feeling the safety and the security of that relationship that you’ve worked with and within and all that for close to 40 years.”