Milwaukee County could complete the recounting of its presidential election results as soon as Wednesday and no later than Friday, a county spokesman said Tuesday.

The recount got off to a slow start last week as elections officials addressed a myriad of complaints from President Donald Trump's attorneys and observers. But as of Tuesday, the work was “very close to being back on schedule,” said Brian Rothgery, spokesman for the Milwaukee County Board of Supervisors.

The recount is about 36% complete in Dane County and only “slightly behind schedule,” said Dane County Clerk Scott McDonell. 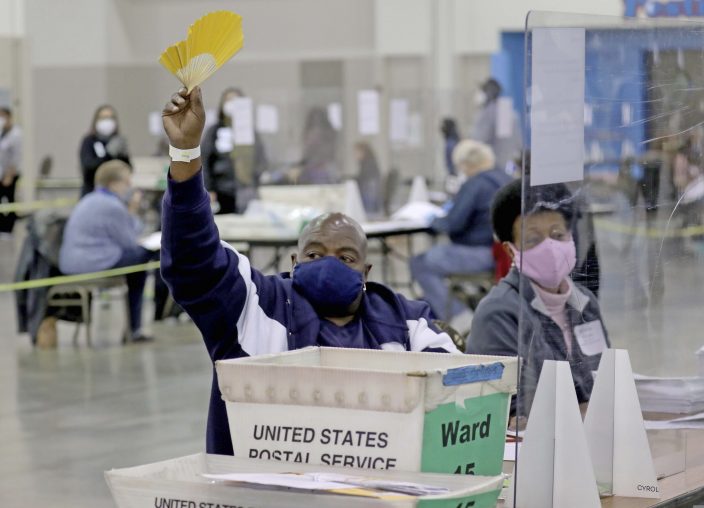 A election worker requests help while recounting ballots at the presidential election recount at the Wisconsin Center Saturday, Nov. 21, 2020, in Milwaukee. Election officials in Wisconsin’s largest county accused observers for President Donald Trump on Saturday of seeking to obstruct a recount of the presidential results, in some instances by objecting to every ballot tabulators pulled to count. (Mike De SistiMilwaukee Journal-Sentinel via AP)

Neither county planned to work on Thanksgiving. They must complete the recount by Dec. 1, the deadline for certifying the vote.

Trump lost to Democrat Joe Biden by about 20,600 votes in Wisconsin but paid for a recount in Milwaukee and Dane counties, where the majority of Democratic votes were made. Trump is widely expected to file a lawsuit challenging tens of thousands of absentee ballots once the recount is complete.

Trump's campaign has raised objections to broad categories of ballots, including all absentee ballots cast in-person.

As of Tuesday morning, recounted ballots showed a net gain of only 41 votes for Trump.