Chase Young fired up his teammates before Washington’s latest game by telling them they only get 16 days out of 365 in a year to do this job. He kept repeating that message before they took the field and then played like it in a victory.

“Today was one of the days,” Young recalled. “I just tell them to play with passion.”

There’s no passion lacking or days off for Young, the No. 2 pick in the draft who has been a game-altering force in his rookie season. He may not lead the league in sacks like his mom expected, but Young is taking on opposing double- and sometimes triple-team attention and leading the best pass defense in the NFL. 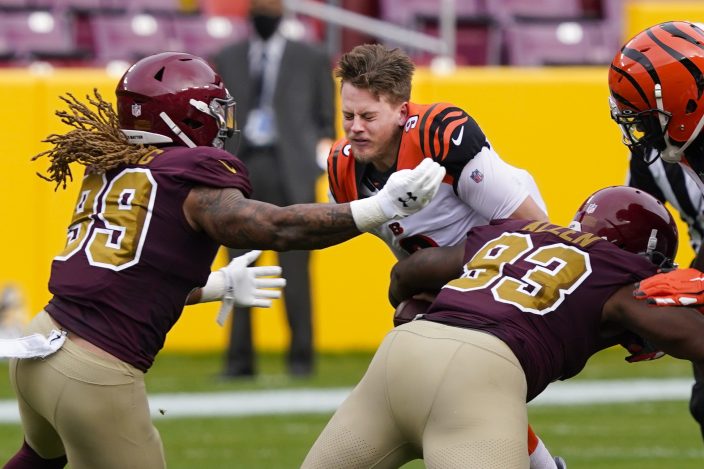 “We see him as a leader on this team,” veteran defensive end and franchise sacks leader Ryan Kerrigan said. “We all kind of feed off his energy.”

Young’s energy is undeniable and his presence unmistakable. With dreadlocks flowing out of the back of his helmet above the No. 99 burgundy and gold jersey, he’s a menace to lineman trying to block him and quarterbacks hoping to avoid him.

His 3½ sacks are most among rookies, and that number is lower than Young would like because he missed a game with a groin injury and offenses are already geared toward slowing him down.

“He has gotten double-teamed an awful lot,” coach Ron Rivera said. “A couple times he’s been tripled where he’s been chipped and then you see a tackle block with the guard turning that way or you see two tight ends and a tackle back-stepping. He’s handled it.”

If there was any doubt about how Young would handle the spotlight of being a Heisman Trophy finalist, top draft pick and local star in Washington, he has erased it and taken any criticism in stride. The most has come from his mom, who gave him a C+ grade halfway through the season.

While Carla Young may be her son’s harshest critic, his teammates are his biggest fans.

“He’s a big-time player,” said receiver Terry McLaurin, who also played with Young at Ohio State. “I tell him before every game, ‘Be the best player on the field,’ and you got to take that to heart, and I think that he is.”

Young doesn’t act as if he’s the best at anything, continually vowing he’ll get better. He brushed off a costly roughing the passer penalty in the final minute of a loss to Detroit as a “rookie mistake” and forced a fumble near the goal line a week later.

Speaking to reporters after that mistake, when he could have easily dodged the camera waiting in the bowels of Ford Field, showed those outside the organization what members of it have known for months.

Young is still technically a rookie, just nine games into his pro career and looking forward to feasting his first Thanksgiving game when Washington visits the Dallas Cowboys — with first place in the NFC East at stake.

Young is earning it so far, helping teammates pile up the sacks. Second-year pass rusher Montez Sweat leads Washington with six, Kerrigan is a half-sack behind and the entire defense benefits from Young’s play that is still a work in progress.

“I’m developing,” he said. “You definitely haven’t seen my best ball yet. I’ll tell you that right now.”

Myles Garrett has only respect for ...