Christophe Dominici, who lit up French rugby from the wing at the turn of the century, has died. He was 48.

“It is with great sadness and profound heartbreak that Stade Francais Paris has learned of Christophe Dominici's death,” the statement said. “A rugby genius and companion without equal, he will leave a great void in our big family. Our thoughts go to his family, his wife Loretta, and his daughters Chiara and Mia.” 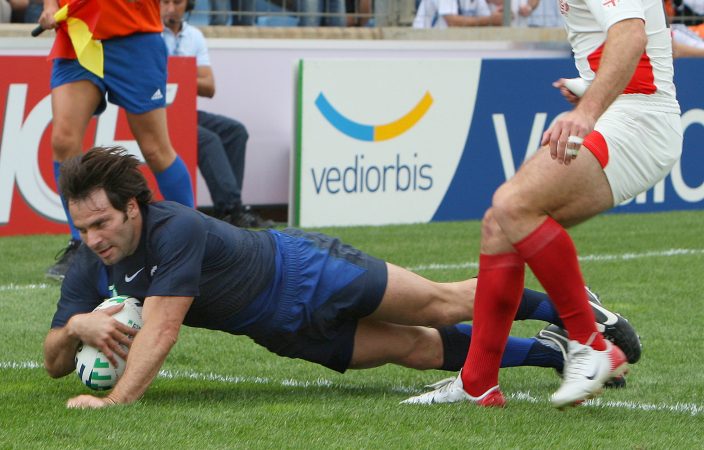 FILE - In this Sept. 13, 2007 file photo, Christophe Dominici of France dives over to score a try during the Rugby World Cup Group D match between France and Georgia in Marseille, France. Christophe Dominici, one of the most exciting wingers to play rugby for France, has died. He was 48 (AP PhotoClaude Paris, File)

The charismatic Dominici played 67 times from France over a decade to 2007 and scored 25 tries, among them one of the most storied in Rugby World Cup history.

During the 1999 semifinal against favorite New Zealand at Twickenham, while chasing a box kick from scrumhalf Fabien Galthie, Dominici caught the All Blacks by surprise when he perfectly judged the bounce, grabbed the ball with his right hand and tore past two defenders to score between the posts. France won against the odds 43-31.

He also played in the France team which featured in an even bigger upset of New Zealand in the quarterfinals of the 2007 World Cup, and won the Five Nations once and the Six Nations three times with Les Tricolors.

“He left his mark on a whole generation of rugby,” the French Rugby Federation said. “Today the rugby family has brutally lost a legend, an emblematic player.”

At club level, he won five French championships in a glittering 11-year spell with Stade Francais, having started his career with hometown club Toulon.