The Atlanta Braves were looking for more than just experience and depth when they signed two-time All-Star Charlie Morton to a $15 million, one-year deal Tuesday.

As was the case when the Braves recently signed another veteran for the rotation, Drew Smyly, general manager Alex Anthopoulos sought a power arm to help push Atlanta to the World Series.

“It’s swing and miss stuff,” Anthopoulos said. “There’s a theme there with both Charlie and with Drew. Power swing-and-miss stuff, in the postseason it certainly plays.” 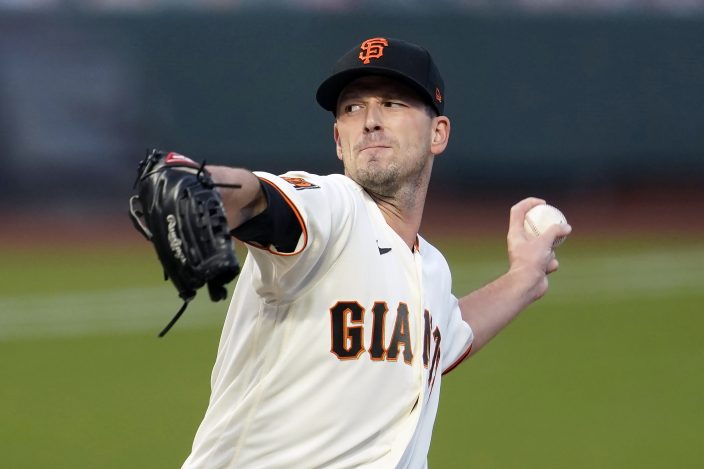 San Francisco Giants' Drew Smyly throws against the Seattle Mariners during a baseball game in San Francisco, Wednesday, Sept. 16, 2020. Smyly became the first of the 181 free agents to switch teams when he agreed Monday, Nov. 16, 2020, to an $11 million, one-year contract with the Atlanta Braves, who are looking to bolster a rotation that was depleted by injuries and disappointing performances. (AP PhotoJeff Chiu)

Morton, a 37-year-old right-hander, is returning to the Braves after helping Tampa Bay reach the World Series this season.

The Braves relied on their young starting pitchers to move within one game of the World Series this year, falling to the Los Angeles Dodgers in Game 7 of the NL Championship Series.

The Braves are counting on Soroka's return in 2021, but the injury was a reminder of the need for depth.

“It’s going to be a longer season than it was last season with 60 games, and depth is critically important,” Anthopoulos said. “Whoever you think your five are going to be when you get into spring training, I can pretty much guarantee you those five will not be standing upright by the time you break for opening day. You want to have at least six that you feel good about.

"Even though our young starters took a step, having that depth was critically important for us and it’s something that if we could get done early we certainly were going to try.”

In addition to losing Soroka, the Braves demoted struggling right-hander Mike Foltynewicz. Cole Hamels made only one start after signing an $18-million, one-year deal for 2020 that became more than $6.6 million prorated during the season shortened by the novel coronavirus.

Smyly and Morton provide significant experience to the group of young starters. Smyly signed an $11 million, one-year deal with the Braves on Nov. 16. Smyly, 31, became the first of the 181 free agents to switch teams.

Atlanta was impressed with Smyly’s four September starts with San Francisco when he had 31 strikeouts in 18 innings, allowing 13 hits and seven earned runs.

He was an All-Star in 2018 and 2019 and helped the Houston Astros win the World Series in 2017. Anthopoulos said he believes Morton may have had a slow start in 2020 because of the coronavirus quarantine but showed his All-Star form in the postseason.

Morton was drafted by Atlanta in 2002 and made his major league debut with the Braves in 2008 before he was traded to Pittsburgh in 2009.

“We saw him trending back to where he was in 2019,” Anthopoulos said.