In an annual Thanksgiving tradition, President Donald Trump will offer a reprieve to a pair of meaty turkeys as he makes a public appearance Tuesday following the Nov. 3 elections.

The National Turkey Federation is presenting the two birds. They are named Corn and Cob in honor of their home state of Iowa. One will be declared the national Thanksgiving turkey, though both will retire to a new home on the campus of Iowa State University.

It’s not the first time the typically light-hearted turkey pardon ceremony has taken place in a tense time for the nation. 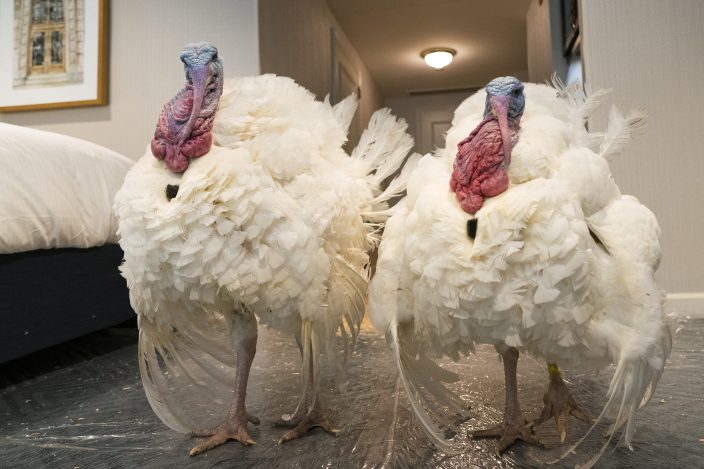 Two turkeys raised in Iowa, who will attend the annual presidential pardon, strut their stuff inside their hotel room at the Willard Hotel, Monday, Nov. 23, 2020, in Washington. The turkeys names are Corn and Cob. (AP PhotoJacquelyn Martin)

Trump used last year’s pardon to make jokes about the impeachment process. The House would go on to approve two articles of impeachment the next month and the Senate would subsequently vote to acquit him.

In 2018, Trump’s joked about one of the turkeys contesting the pardon election. The scenario he described bears a striking resemblance to the one he faces today.

“This was a fair election,” the president joked. “Unfortunately, Carrots refused to concede and demanded a recount, and we’re still fighting with Carrots. But I will tell you, we’ve come to a conclusion. Carrots. I’m sorry to tell you, the result did not change. That’s too bad for Carrots.” 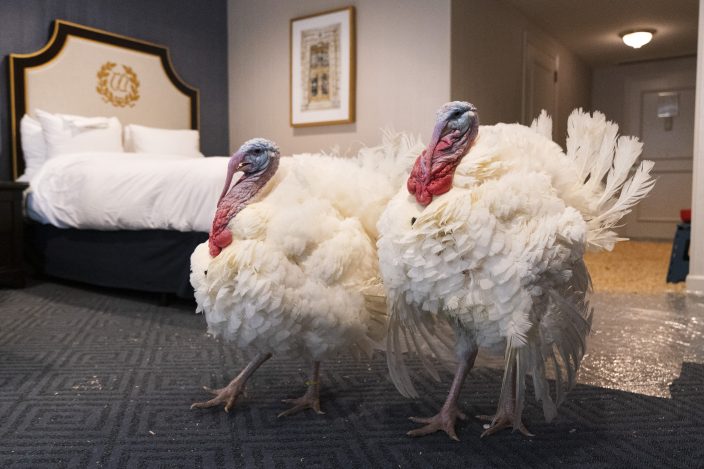 Two turkeys who will attend the annual presidential pardon, strut their stuff inside their hotel room at the Willard Hotel, Monday, Nov. 23, 2020, in Washington. The turkeys names are Corn and Cob. (AP PhotoJacquelyn Martin)

The practice of sending a turkey to a farm became the norm under President Ronald Reagan. But George H.W. Bush established the annual turkey pardon tradition in 1989 by sparing a 50-pound (23-kilogram) bird as animal rights activists picketed nearby.